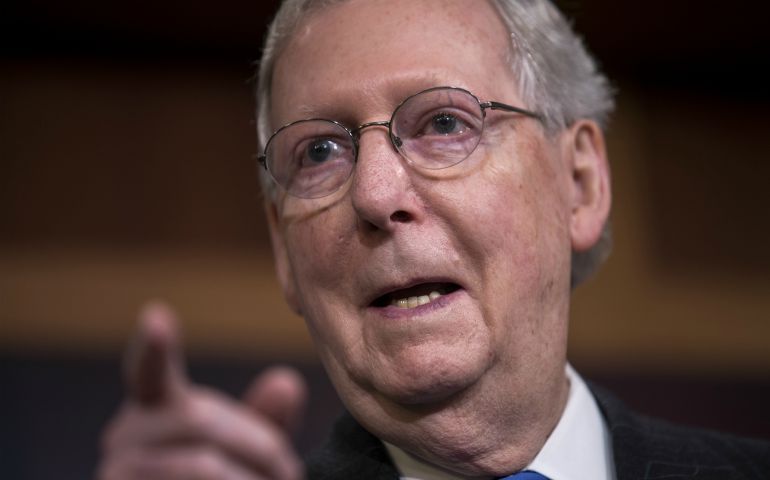 First, the good news: Senate Majority Leader Mitch McConnell delayed a vote on the proposed overhaul of the nation's health care system because he was a few votes short of the 50 needed to assure passage.

Now, the bad news: Senate Majority Leader Mitch McConnell delayed a vote on the proposed overhaul of the nation's health care system because he was only a few votes short of the 50 he needed to assure passage. Most Republican senators are perfectly prepared to vote for this lousy and immoral bill. And how hard is it to scramble together the pressure and the incentives to pick up the few votes McConnell still needs? Will this episode prove what Pope Francis means when he says "reality is more important than ideas," or will ideology triumph in the face of facts?

On a press call with reporters yesterday, Daughter of Charity Sr. Carol Keehan, president of the Catholic Health Association, joined other hospital association representatives to explain just how bad the Senate plan is. "It fundamentally undermines health care for millions of people," she said, proceeding to tell a story about a woman in Nevada, Melinda, who couldn't afford her share of the insurance offered at her workplace. One day, she found a lump in her breast and, sadly, it was cancer. But she was able to qualify for Medicaid because her state participated in the extension of that program rolled out with the Affordable Care Act (ACA, also known as Obamacare). She got the treatment she needed and she survived her bout with breast cancer. Melinda, along with 22 million others, would lose their insurance under the Senate plan.

Sister Carol said that while Senate leaders had claimed their bill would cover pre-existing conditions, in fact, "It leaves the back door open for states to waive this requirement." And she bluntly said that this bill was not really about heath care. "In order to give tax cuts to the richest people in this country, we have this bill," she said.

Keehan also pointed out that some of those hardest hit by the proposed law would be the very same people who gave President Trump his margin of victory last November and account for much of the GOP tilt of the Senate: rural voters. "The first to be hit by this [proposal] are rural communities where hospitals and critical access hospitals are surviving on a shoestring already," she explained. She said the nursing homes are also worried about their ability to keep their doors open, and that in some rural areas, a hospital is the largest employer in the region.

Rick Pollack, president of the American Hospital Association, echoed Keehan's concerns. "Medicaid is already an underfunded program," he pointed out. Hospitals already make up for what Medicaid doesn't cover by spreading the costs around. "The Senate bill is going to make it more expensive for all of us." And Atul Grover of the Association of American Medical Colleges warned that the partnerships many university hospitals have with rural health care providers would be endangered by the Senate bill as well.

For all these reasons and more, those who actually provide health care in America are overwhelmingly opposed to this bill. Why, then, is it only a few votes away from passage? Because eight years of propaganda directed against the Affordable Care Act has convinced the Republican base that, no matter the facts, no matter the consequences, the ACA must go. They protest that the ACA is collapsing, but that is like the complaint of a wife who murdered her husband that she is not collecting his life insurance. The ACA needs some adjustments, to be sure, but the White House pulled the plug on the usual effort to get people to enroll earlier this year, and the prospect of the ACA ending has driven insurance companies out of the exchanges in advance. The uncertainty on Capitol Hill does not sit well in corporate boardrooms.

It is possible that McConnell will not be able to garner the votes. There are those on the right, such as the Club for Growth, who think the bill does not go far enough. "Only in Washington does repeal translate to restore," said David McIntosh, the group's president. "Because that's exactly what the Senate GOP healthcare bill does: it restores Obamacare. And while it's hard to imagine, in some ways the Senate's legislation would make our nation's failing healthcare system worse." On the other side, there are senators like West Virginia Sen. Shelley Moore Capito and Nevada Sen. Dean Heller, in states that expanded Medicaid, who want to pull the bill in a less conservative direction, keeping more of the subsidies the ACA provided.

When a similarly lousy bill came before the House earlier this year, Speaker Paul Ryan had to pull the bill because he did not have the votes, only to bring it back six weeks later and push it across the finish line. He, too, faced a caucus that was pulling in different directions. But, in a reversal of what the founding fathers intended, the Senate has become the chamber that is more sensitive to popular opinion than the House. The House is so heavily gerrymandered, Republican members can vote the party line without fear of losing the next election. You can't gerrymander a state boundary, so except in those few, mostly southern and plains states that are overwhelmingly Republican, it is the senators who now must be more responsive to public opinion than their colleagues in the lower chamber.

Senators are more insulated from President Trump because of their six-year terms. And, as each week goes by, the man in the White House gives further evidence that his unpredictability is so great, if they go to the mat for him on this vote, there is no guarantee he will not throw them under the bus the next day. And undoubtedly some of those with the president's ear are reminding him of his repeated campaign promises not to do what the Senate is close to doing: cutting entitlements. The president may not understand much about policy, but surely someone in the White House can see the damaging effects this bill would have on the rural voters who tipped the election to Trump.

This isn't over. McConnell's brutal leadership style will be on full display when the Senate returns from its recess in a couple of weeks. There really are changes needed in the ACA, and McConnell can wave the fear they will be blamed for inaction in the face of wavering senators. It is imperative that ordinary citizens let their senators know how they feel about this rollback of health care. The American people want Congress to fix the ACA, to make it better, not to eviscerate its accomplishments. They must now make sure their elected representatives know it.