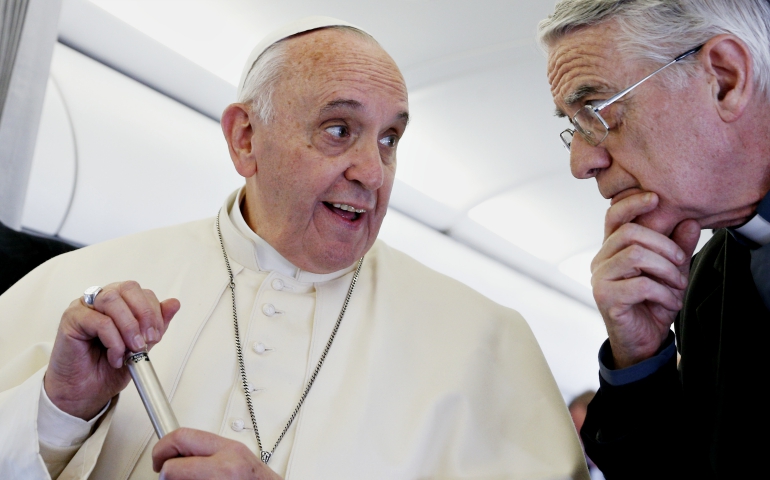 Pope Francis consults with Jesuit Fr. Federico Lombardi while answering a reporter's question on his flight back to Rome from Strasbourg, France, in November 2014. (CNS/Paul Haring)

I continue my week of getting caught up on church affairs after a week focusing only on President Donald Trump's first foreign trip. Last week, Salt & Light Media Foundation celebrated the opening of its new headquarters and studio in Toronto. Salt & Light is what Catholic television should be: interesting, nonpartisan, unequivocally loyal to both the teaching of the church and the demands of journalism. Put differently, it is what EWTN could be if the latter were run by Basilian Fr. Tom Rosica, a man filled with the joy of the Gospel long before we received an apostolic exhortation of that name.

It was quite the celebration, with Cardinals Thomas Collins of Toronto, Gérald Lacroix of Quebec and Donald Wuerl of Washington, D.C., joining in the festivities. I would like to call attention to the keynote address by Jesuit Fr. Federico Lombardi, who spoke about his service as spokesman for, and about his interactions with, three popes: St. John Paul II, Pope Emeritus Benedict XVI and Pope Francis.

Lombardi, who retired in 2016, recognized that John Paul II was the first pope to really grasp the power of modern communications and utilize that power effectively. Lombardi recalled that after every foreign trip, John Paul would host a working lunch with his communications team to conduct a postmortem: "what was understood and what message were transmitted to the people and which messages didn't get through, etc."

He said that John Paul II was "authentic" that he was "always himself," by which I think he means no slight against his predecessors so much as a recognition that diplomats tend to be more cautious in their words than pastors are, and John Paul II was a pastor. He also related that John Paul always looked on the positive side of communications while Lombardi himself often saw first the downside.

One moment especially showed how Lombardi did not at first grasp, as John Paul did, the power of an image to convey the church's teaching. Lombardi told the Salt & Light audience:

When he visited in prison [Mehmet] Ali Agca, who tried to kill him, to offer him forgiveness, he was not afraid to allow television cameras to capture that moment. I was perplexed, given the spiritual intimacy of that moment, but when I understood that the pope was offering us the strongest image of forgiveness that we had ever witnessed in our life — and perhaps even in our century! — I understood that he had good reason to allow us to witness this moment.

I think we all remember seeing those images of that visit and wondering to ourselves if we would be capable of extending such forgiveness. Or receiving it.

Benedict XVI was just as "authentic" as his predecessor, but he was constitutionally shy and he had worked at a desk job most of his life. Lombardi did not complain in his talk, but it was common knowledge in Rome that Lombardi often had to go out and explain things he had not been told until a journalist asked him about them. He offered no reproach.

Indeed, he commended Benedict for something I agree he does not get enough credit for: forcing the church to confront the scourge of clergy sex abuse. Lombardi said:

The deepest experience I had with Benedict was that of the commitment to grow in truth and transparency. And I understand that this has a price, which could be very painful. We all know that one of the great "crosses" of Benedict's pontificate — I think the greatest — was the story of sexual abuse in the church. He bore it with great humility, patience and perseverance, personally making all the necessary steps for a long journey, ranging from the recognition of the severity of the faults in the church, the personal hearing of the pain of the victims, the establishment of the norms and procedures to do justice, to punish the guilty ones, to purification and internal conversion, to provide the criteria for the good selection and training of seminarians, to the spread of a true culture of crime prevention and the protection of minors.

It was necessary to recognize the truth even when it is extremely painful, to go deep into the truth before God and men. To not be worried about the "image" first, or concerned about "saving face" (bella figura). Of course, we must wish that our image be good, but only if it corresponds to a good reality. If not, it is a deception. And we've seen what were the tragic consequences of a culture of "cover-up," founded precisely on the primacy of outward appearances.

As with many other things in Benedict's papacy, his efforts to confront clergy sex abuse were not entirely successful. Lombardi's use of the word "patience" also indicates the degree of resistance the pope encountered, just as Francis today encounters resistance within the Curia. But, first as prefect of the Congregation for the Doctrine of the Faith and later as pope, Benedict set the church on the right path after years of scandalous covering-up. He was the first pope to look at these cases and not think, "Poor Father," but instead, "How can we help the victims and how can we root out this cancer in the church?"

Then we come to Francis. Lombardi notes Francis' understanding of the power of gestures, which transcend languages and cultures. And he notes the joyful, positive way the pope presents the church, and his desire for closeness with people. But it is his explanation of Francis' spontaneity that is most striking, not least because as a press secretary, it is easy to see the risks of being spontaneous.

Then there is his spontaneous attitude of listening and dialogue. Even for conversations in general, Francis generally wants journalists to ask all the questions they wish; he does not ask to see the questions in advance in order to prepare a response. He wants his answers to be spontaneous, even at the cost of not being exhaustive or complete, for in authentic dialogue, we arrive at the truth together, step by step, listening to each other. Not every answer can be the last word, but in dialogue we can draw closer to a deeper and greater truth together. From this closeness and listening also flows concrete and understandable language, drawn from the experiences of people's lives.

I had never thought of it this way, that his spontaneity is more than a method, that it is rooted in his commitment to, and understanding of, dialogue.

Not many people have the opportunity of having a ringside seat during three pontificates, but Lombardi did. That he shared his thoughts not in a memoir but at the commencement of something new, a broadcast center, gives some indication of his still present zeal for evangelization, not self-promotion.