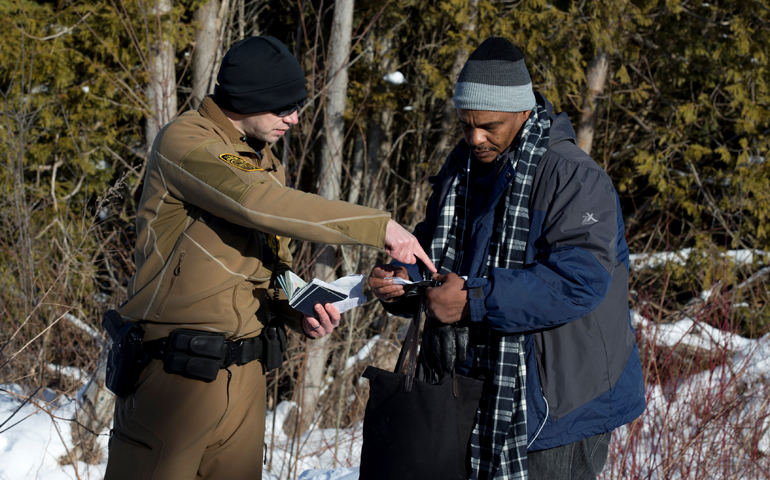 A man who claimed to be from Sudan has his and his family's passports checked by a U.S. border patrol officer Feb. 17 in Champlain, N.Y., at the U.S.-Canada border. (CNS/Christinne Muschi, Reuters)

How should Catholics, individually and as a church, resist the Trump administration's new orders on deportations? There are three things that must be done. Tell the truth. Resist the deportation police. And, fight the fear.

When the new guidelines for deportations were released, administration officials tried to claim it was no big deal. "Just enforcing the law" was the mantra on the cable talk shows, as if the law was not demonstrably broken. "We do not have the personnel, time or resources to go into communities and round up people and do all kinds of mass throwing folks on buses. That's entirely a figment of folks' imagination," said an official with the Department of Homeland Security on a call with reporters. "This is not intended to produce mass roundups, mass deportations."

It isn't? Then why is the administration calling for 10,000 more deportation agents? Net migration is about zero. Despite the president's repeated highlighting of the few horrific crimes committed by undocumented immigrants, there is no spike in crime perpetrated by migrants. Those convicted of terrible crimes were already being deported by the Obama administration.

"The implementation memos give ICE [Immigration and Customs Enforcement] and the Border Patrol carte blanche to use every tool possible to deport as many people as possible, regardless of their equities in the country, how long they have lived here, or whether they have committed any criminal offense," Kevin Appleby told me in an email sent from Rome where he is attending meetings on migration. Appleby was the longtime point person on immigration at the U.S. bishops' conference and now serves as senior director for migration policy at the Center for Migration Studies of New York.

"The rhetoric and policies of the new administration create an environment which will lead to abuse, as some immigration agents will feel empowered to ignore due process and deny persons their basic rights," he said. "Indeed, in the past there have been reports of immigration agents coercing immigrants to sign away their rights or even deny them access to asylum procedures. Catholics should also expect to see more ICE agents waiting outside of Mass, or perhaps going into churches or church programs in search of immigrants. It is a new, and very dark, day."

Second, there are practical steps that can be taken to frustrate the enforcement agents when they conduct a raid. In Chicago, Mayor Rahm Emanuel has started a task force called "Chicago Is With You." Fliers being distributed in English, Spanish, Polish, Hindi, Arabic, and other languages provide websites and phone numbers for immigrants to call and make sure they know their rights. The city is partnering with a host of civil society actors like the Resurrection Project and the Heartland Alliance to provide services. The flyer promises "the Police Department will not ask about the immigration status of crime victims, witnesses, or other people who ask for help."

Business owners should know that ICE agents need a warrant to enter their property just as any other investigating officer does. Workers need to be trained to refuse to cooperate with agents during a raid: No one shows documents, no one answers questions. Every workplace should have emergency numbers for legal aid.

The Catholic Legal Immigration Network (CLINIC) have launched a website called "Defending Vulnerable Populations Project." It focuses on making sure there are trained lawyers ready to jump into the fray at short notice.

I spoke with Fr. Clete Kiley, director of immigration policy for UNITEHere and a priest of the Chicago archdiocese. He told me that in his trips to the border, veteran border control agents reported that new recruits are often poorly trained for the tasks they are assigned. He recalled the case of a 3-year-old boy from Guatemala, who did not speak Spanish, only Qojobal, an indigenous language. "The ICE report stated that the boy had come to America seeking a better life. How did the ICE agent know this?" Kiley asked. "He didn't, but any effort to actually provide an interpreter, as the law requires, to ascertain if the boy was a refugee fleeing violence, would have slowed down the process of deporting that little boy. Both myself and the attorney with me were stunned at what we perceived as perjury by a federal agent. Don't tell me about 'enforcing the law' when we witness these kinds of abuses in the treatment of migrants and refugees."

Third, concerned citizens must devise ways to fight the fear. A huge caveat: Those of us with U.S. passports are not afraid about what is transpiring the way our neighbors without proper documents are afraid. It is insulting to suggest that "we" are afraid the way they are afraid. What can we do?

We can speak with our neighbors, and make sure they know that you are willing to help if they need it. We, too, should have emergency numbers for CLINIC and other legal aid groups. We should speak with our pastors to see what resources are being made available through our parish and diocesan structures. In my hometown in Connecticut, there is a house on the Main Street that was a regular stop on the Underground Railroad before the Civil War, and there is no reason we cannot turn our homes into places of shelter again.

The bishops of the United States must find their voice and let the White House know that if they are coming for immigrants, they have to come through the bishops. The Catholic Church's leaders should reach out to other denominations when possible, but they should not be afraid to take the lead here. These are our people.

These deportation orders are the result of a political process, and so it is incumbent upon us to also formulate a political response. I can't tell you how warmed my heart is by the pictures and videos of huge numbers of people turning out for town meetings with their congressional representatives. This should continue: The president has wide discretionary authority in this area, but at some point, there is a bill to be paid, and that requires congressional authorization. Do we really need to spend north of one billion dollars hiring more deportation agents to solve a problem that does not exist? Will conservative Republicans be eager to sign that check?

Resist, resist, resist. The administration is laying the groundwork for mass deportations even if they claim they have no such intention. History is littered with people who couldn't believe the worst was happening until it was too late. We should not let ourselves be added to that tragic list.

Flyer: Resources for Chicago immigrants and refugees by National Catholic Reporter on Scribd