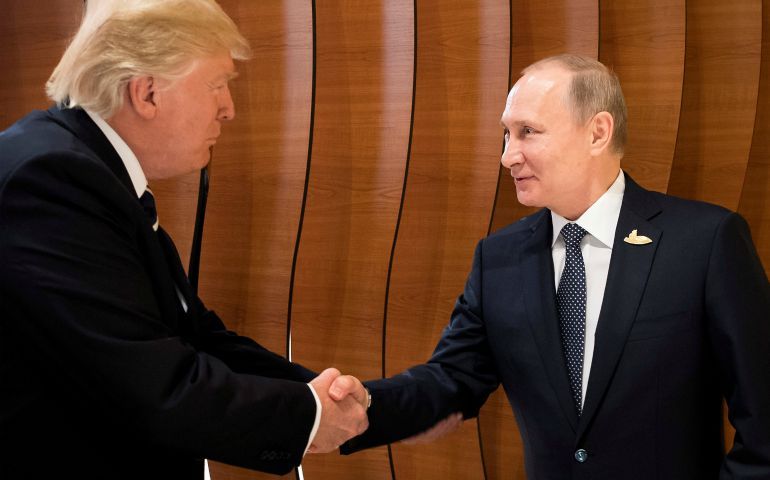 U.S. President Donald Trump met with Russian President Vladimir Putin for more than two hours during the G20 Summit in Hamburg, Germany, four times the originally scheduled 30 minutes. "There was such a level of exchange and engagement, neither of them wanted to stop," commented Secretary of State Rex Tillerson who also sat in on the meeting with his Soviet counterpart, Sergei Lavrov, foreign minister. "There was so much to talk about. … Just about everything got touched on." Trump later called the meeting "tremendous."

Why is none of this comforting? Because our president has told a lie virtually every day he has been in office and the only constant in this incredibly chaotic White House is that "the everything," including foreign policy, orbits around Trump's personality and his neediness. Does anyone think that Trump is more worried about efforts to interfere in our elections by the Russians than he is about his own approval rating? Does anyone think he would not find a kind of psychological comfort in Putin's denial of any such efforts, given his own unwillingness to state clearly and unambiguously that it was the Russians who conducted the interference? Are we expected to forget that, during the campaign, Trump always started his comments about Russia not with a list of their crimes, but with the fact that Putin said "nice things about me."

Ah, yes, but Secretary Tillerson was in the meeting, too, so there was an adult present. Tillerson is an adult, to be sure. He is also a man who, as head of Exxon Mobil Corp., never let moral decency get in the way of a good business deal, including good deals with Putin, and only the credulous would think his patriotism can't be similarly whittled away bit by bit. I suspect if Trump and Putin had actively connived to bury the truth about Soviet meddling, Tillerson would have caused a stir, but a lot of damage was done without anything being overt. Tillerson told the press that the president had pressed Putin on the election interference, but Putin said he had the impression that the president accepted his denial. The truth is somewhere in between.

The damage was obvious. Whenever the president of the United States meets with a foreign despot, we should get something big just for condescending to the meeting. Mr. Putin is someone who puts his political enemies in jail or worse, and he considers journalists among his enemies. Two journalists have been killed this year, both of whom were involved in uncovering corruption within the regime or Putin's political party. He has propped up the only person, Bashar al-Assad, to use battlefield chemical weapons since World War I. He has successfully invaded, and subsequently annexed, parts of Georgia and Ukraine. Putin is widely believed to have become the richest man in the world. Mr. Trump began his meeting with this man by saying what an honor it was to be with him. At the end of the meeting, Trump and Putin pledged cooperation on cyber security, a pledge that left everyone in Washington scratching their heads. It was like Little Red Riding Hood asking the wolf for directions.

To be fair, Mr. Trump is not the only new president to come into office seeking better relations with Mssr. Putin and seeking to curry favor. President George W. Bush famously allowed that he had "gotten a sense" of Putin's soul. President Barack Obama had a cringe-worthy open mic moment when he told then-president, and Putin puppet, Dmitry Medvedev he would have "more flexibility" after the election, to which Medvedev explained, immediately, he would convey this to Vladimir.

The United States and Russia are destined to have lousy relations. Just look at our history. In the last century, the United States participated, albeit fitfully, in a failed attempt to squash the Bolshevik revolution then ignored the Soviet Union's existence for its first decade or so. We were allies in the Second World War, but by the time the Big Three met at Yalta in February, 1945 it was clear the Russians were on a collision course with the Western Allies. At the conclusion of that war, the Cold War began, heating up at times and almost touching off a nuclear war, but eventually the Soviet empire collapsed.

For a decade, Russia struggled mightily to adjust to post-Soviet life, and on the first day of the new millennium, Putin took the reins of power and relations between the U.S. and Russia have gone downhill steadily as Putin's thuggery became more and more obvious. His meddling in the U.S. elections last year was only the latest in his poor man's war against the West, an effort to destabilize our economies and democracies through cyberwarfare, aiding the enemies of peace and stability in the Mideast, all the while brutally shutting down any internal dissent and turning the Russian government into a large, extended mob enterprise.

Beyond that spectacularly unhopeful history, there are basic strategic facts that likely will pit us against them for as long as anyone reading this will be alive. They remain the largest land power in the world, just as we maintain the largest army and navy in the world. Former Soviet republics, most with chummy relations with Moscow, share a border with countries that are either America's avowed enemies, like Iran, or countries where we have heavily invested in recent war efforts, like Afghanistan. China vacillates between Russia and the U.S. and has since World War II. Russia has wanted to exert great influence in both the Pacific and Mediterranean since the days of Peter the Great.

On top of all this, there is now something new and different and yet more ominous, a sitting president whose campaign is being investigated for possibly colluding with the Russian efforts to interfere with our elections. For all of his feigned ignorance about Russian involvement, Trump knows one thing for sure: that Putin wasn't helping Hillary Clinton, and to a narcissist, that may be enough. The danger here is not that the president would willfully do anything to harm the interests of the United States. The danger is that he identifies himself with those interests so thoroughly, and so uncritically, that he could easily be played by someone who, I don't know, rose through the ranks of the KGB and is known to be a master at manipulation. The danger is that in a room in Hamburg last week Donald Trump found a new fan, and so Vladimir Putin found a new toy, and the United States is going to be played for the next four years.

When will President Trump criticize Russia?