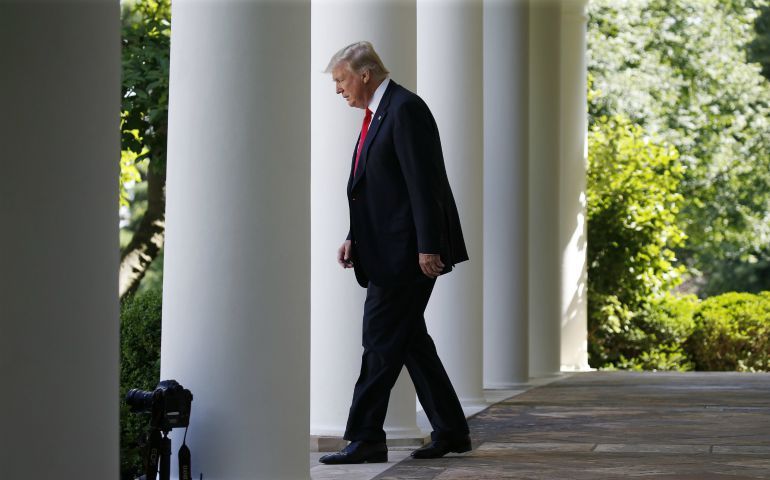 Were the stakes not so high for the planet and for the poor, we would normally think it a good thing for a politician to keep a campaign pledge. The disconnect between what some candidates do and say to win an election and what they do once in office is at the very root of the disgust with politics and politicians that led to Trump's victory last November. That disconnect is real in too many cases, and the disgust is warranted. But the stakes intervene into our moral calculus: The president really is giving aid and comfort to the enemies of the planet, and the adverb "normally" seems wildly inappropriate this year.

The prior question is why Trump made this campaign promise in the first place. I will stipulate that venturing into the terrain of the president's motives is like falling down the rabbit hole. We know that, as a private citizen, Trump has stated climate change is a hoax perpetrated by the Chinese to hurt America's economy. The charge is, of course, incredible, suggesting as it must that 96 percent of the world's scientists somehow came together to falsify their data, devise a fanciful theory to account for the falsified data, and perpetrate this fraud on world opinion, the analysis of global temperatures dovetailing perfectly with projections of the Chinese and U.S. labor markets.

But this is Donald Trump, the man who sustained the allegation that President Barack Obama was not born in the United States and that his birth certificate was a fake. This is the man who claimed "thousands and thousands" of Muslims in Jersey City, New Jersey, cheered the collapse of the World Trade Centers on September 11, 2001. Why should we be surprised that he thought climate change was a hoax?

To be fair, in early March, Trump alleged that Obama had wiretapped Trump Tower, an allegation for which he produced no evidence. Now, it is true that modern day intelligence does not use wiretaps anymore. It is also true that Obama certainly could not have ordered any such electronic surveillance specifically against candidate or President-elect Trump without a warrant. But it turns out that the FBI really was investigating Trump associates during the election, so while the particulars of Trump's charge were false, there was some truth there as well, albeit an enormously damning truth for Mr. Trump.

Trump's stance on climate change, like so much about him, could be attributed to eccentricity, specifically his penchant for conspiracy theories and his bizarre belief that whatever he hears from a pundit on Fox News is somehow verifiable truth, but that would be a mistake. In this instance, there has been a whole industry of fellow travelers, and it is they, as much as the president, who warrant our disdain and disgust.

Unsurprisingly, the Koch brothers are the source of much of the funding that has gone into the climate change denial industry. A report by Ecowatch illustrates just how long the monied tentacles of the Koch brothers are. There are groups like the libertarian Heartland Institute, which are dedicated mostly to climate change denial, although Heartland formerly was involved in denying that tobacco caused cancer: In advance of Pope Francis' visit to the U.S., they held a press conference at which an official with the group claimed "paganism" had entered the Catholic Church. Americans for Prosperity, a Koch-funded group that promotes free market solutions and fights government regulations on a host of topics, has long been involved in trying to debunk climate change science as well.

And, then there are the Catholic intellectuals who engaged in a bizarre set of "prebuttals" in advance of the release of Pope Francis' landmark encyclical Laudato Si' or sought to downplay its significance once it was released. Stephen Moore of the Heritage Foundation called Pope Francis a "complete disaster when it comes to public policy pronouncements." Samuel Gregg and Kishore Jayabalan of the Acton Institute spoke out against the encyclical, and Acton founder Fr. Robert Sirico went on WHYY radio to complain about the encyclical. And at First Things, no less a prominent figure than Professor Robert P. George tried ardently to place the pope's encyclical in a box marked "optional for Catholics." He cited a number of thoroughly discredited scientists to make his point that the scientific community was not in agreement about the issue.

We know quite clearly what Pope Francis has taught the universal church about those who question climate change:

"The external deserts in the world are growing, because the internal deserts have become so vast." For this reason, the ecological crisis is also a summons to profound interior conversion. It must be said that some committed and prayerful Christians, with the excuse of realism and pragmatism, tend to ridicule expressions of concern for the environment. Others are passive; they choose not to change their habits and thus become inconsistent. So what they all need is an "ecological conversion," whereby the effects of their encounter with Jesus Christ become evident in their relationship with the world around them. Living our vocation to be protectors of God's handiwork is essential to a life of virtue; it is not an optional or a secondary aspect of our Christian experience. (Laudato Si', 217)

Forevermore, when I think of Acton Institute, the phrase "internal deserts" will pop into my head.

We can hope that the president's decision is less consequential for the Earth's climate than it is already for the U.S diplomatic standing in the world. But Catholics are called to do more than that. If national policy is to be stalled for four years, Catholics can explore what can be done at the local and state level, to say nothing of what our parishes and dioceses can be doing. The bishops advocated for Trump to stay in the Paris accord, but the bishops are not simply advocates, they are property owners. If they have not contacted the Catholic Climate Covenant about retrofitting their faculties to make them more energy efficient, they should. If they have not explored the installation of sustainable energy systems, they should. We can fret, yes, but there is more we can do. The power of the presidency is awesome, but it is not total. And those Catholic Republicans who hold office in Washington need to be asked whether they stand with the pope and the world's scientific community or with the president and his conspiracy theories.

If we say we hear Jesus' voice, are we committed to the truth?

We all engage in collateral damage to the earth