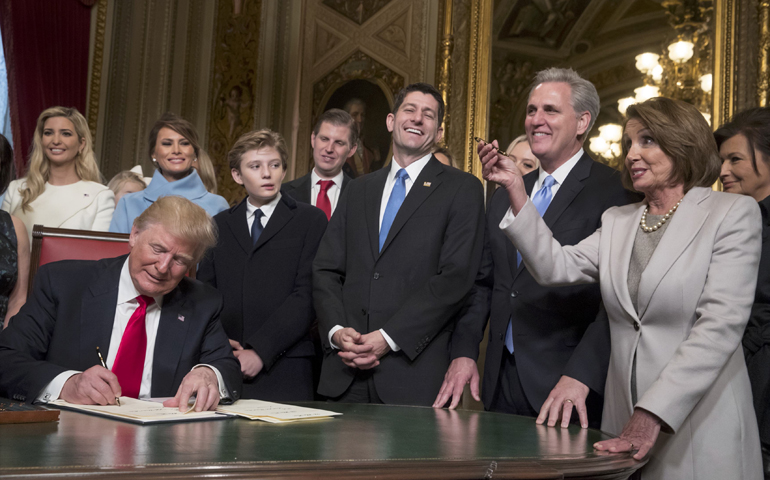 President Donald Trump, joined by congressional leadership and his family as he formally signs his Cabinet nominations into law Jan. 20 in Washington. (CNS/J. Scott Applewhite, pool via Reuters)

In his inaugural address, as on the campaign trail, President Donald Trump borrowed a phrase from Franklin Roosevelt when he promised that "the forgotten man will be forgotten no longer." Turns out, for Trump, the forgotten man's name is Goldman Sachs.

The president has staffed his Cabinet and his senior staff with no fewer than six alumni of the high-powered Wall Street investment firm, even though he charged during the campaign that it was his opponent, former Secretary of State Hillary Clinton, who was beholden to Goldman Sachs and other large Wall Street firms. While it was clear during the campaign and has been clear since his inauguration that Trump's populist proposals often broke from traditional Republican Party concerns and values, now that he is in office, some of the most outrageous things he is doing are those that we might expect from any Republican president.

On Friday, the president signed an executive order calling on his secretary of the treasury to lead an examination of all regulations of the financial sector.

"We expect to be cutting a lot out of Dodd-Frank," the president told reporters, referring to the landmark 2010 law that sought to prevent the kinds of financial-sector actions that had crashed the nation's economy in 2008 and regulate Wall Street going forward. Dodd-Frank included items like the so-called Volcker Rule, which introduced some degree of separation again between commercial banks of the kind all of us use to pay our bills and investment banks of the kind found on Wall Street.

The rule did not go as far as the original Glass-Steagall Act, passed during the Depression and revoked by President Bill Clinton and the Securities and Exchange Commission in the 1990s. That law has banned commercial banks from being linked with securities firms entirely, while the Volcker Rule limited the amount a commercial bank could invest in hedge funds and such. Other provisions required strong capitalization by banks, greater transparency by both banks and credit-rating agencies, consumer protections provisions, and the like. The idea was that Wall Street had just demonstrated for all to see that they were incapable of regulating themselves, so the government needed to undertake some of that task on behalf of consumers and also on behalf of the whole country, which has seen much wealth evaporate and the economy come to a screeching halt on account of the misdeeds by bad financial actors.

Now, with Republicans in control of both houses of Congress and the White House, you would think the most important thing that happened in 2008 was that Michael Phelps won eight gold medals at the Beijing Olympics. The populist anger directed at the reckless behavior and subsequent taxpayer bailout of Wall Street was part and parcel of the anger Trump tapped into during his campaign. How often did he cite Sen. Bernie Sanders' accusations that Clinton was too close to Wall Street for comfort!

Now, all that is forgotten. Trump's executive order is the first step toward dismantling the protections the country needs from the malfeasance of the high priests of the financial sector. He has betrayed the working-class people who put him in the White House.

Sen. Mitch McConnell and Speaker of the House Paul Ryan surely know they will have to break with the president at some point, but they are moving to dismantle regulations aimed at Wall Street and other exceedingly wealthy interests before the break takes hold. Last Friday, at around 6 a.m., the Senate voted to rescind Section 1504 of Dodd-Frank. The House had voted to repeal that rule two days earlier. Both votes were along party lines, even though Section 1504 was known as the Cardin-Lugar amendment when it passed in 2010, named for Democratic Sen. Ben Cardin of Maryland and Republican Sen. Dick Lugar of Indiana.

Section 1504 was an anti-corruption rule that required oil, gas and extraction industries to disclose payments to the governments of foreign countries. It did not bar such contributions, it only required reporting them. The idea was to prevent Western multinationals from writing checks to corrupt dictators in exchange for access to a country's natural resources. Those resources belong to the people of a country and are often found in some of the poorest countries in the world. Rachel Maddow had a great segment on Equatorial Guinea, which has one of the highest per-capita incomes in Africa, but where three-quarters of the population lives below the poverty line because the ruling family has garnered all of the money from harvesting its gas. ExxonMobil, until recently led by Rex Tillerson, our new secretary of state, was the company sending the money to the dictators.

The Catholic bishops supported the adoption of Section 1504, and last week, as the votes neared, Bishop Oscar Cantu, chair of the Committee on International Justice and Peace, issued a statement opposing efforts to rescind the rule.

After recounting the USCCB's history of support for measures aimed at helping the poor of the world through transparency and other measures, Cantu stated: "I renew our strong support for greater transparency and comprehensive reporting in revenue payments. As my predecessor as Chairman, Bishop Howard Hubbard wrote, 'Transparency in extractive industry payments to governments is important to us as leaders of the Catholic community of faith and institutions that are investors and consumers. We believe these principles, policies, and rules can help protect the lives, dignity and rights of some of the poorest and most vulnerable people on earth. The rules have moral and human consequences as well as economic and political impact.' Therefore, I urge all members of Congress to reject the  ( 9; HJR 41) and instead protect the life and human dignity of all people from suffering the 'resource curse.' "

Eric LeCompte, executive director of JubileeUSA, which monitors issues related to developing countries, poverty and the financial sector, lobbied Congress hard on this, especially those Republicans who backed the rule in the first place. After the vote, he told me, "This was a vote we should have won. Jubilee USA has held together a coalition of Republicans and Democrats to work on structural issues to end poverty for almost 20 years. For seven years, we've held together both progressives and conservatives to move forward anti-corruption efforts. This was the first time in those years that our Senate champions did not stick together."

"This deeply saddens me and our national religious partners," LeCompte continued. "Our interfaith religious community continues to influence a bipartisan agenda. Unfortunately, I fear‎ we are all facing more obstacles in the short term. The financial issues we work on impact our lives almost as much as the very oxygen we breathe. JubileeUSA's religious leaders have been successful in bridging all political divides we face. Ultimately, I know in the long-term, we will again be successful in overcoming the special-interest groups who are trying to divide us. But I am disappointed by this current setback because we failed by two votes to protect some of the most vulnerable people on our planet. I know we will win, but it will take several more years of focused and consistent work."

In the Washington of Donald Trump, nothing seems usual or expected, but that is not always the case. There is still a good reason to vote for Democrats, and it is because, when they lose, people like McConnell will coerce his colleagues, even the ones who know better and who once voted accordingly, to throw the poor under the bus and make life easier for the already-filthy-rich. The repeal of Section 1504 isn't on Trump. His executive order regarding Dodd-Frank is on him, and we don't need to be creative in thinking how that will end. President Trump and Speaker Ryan and Majority Leader McConnell are busy letting Wall Street off the hook. We know where this led before. And so much for draining the swamp.