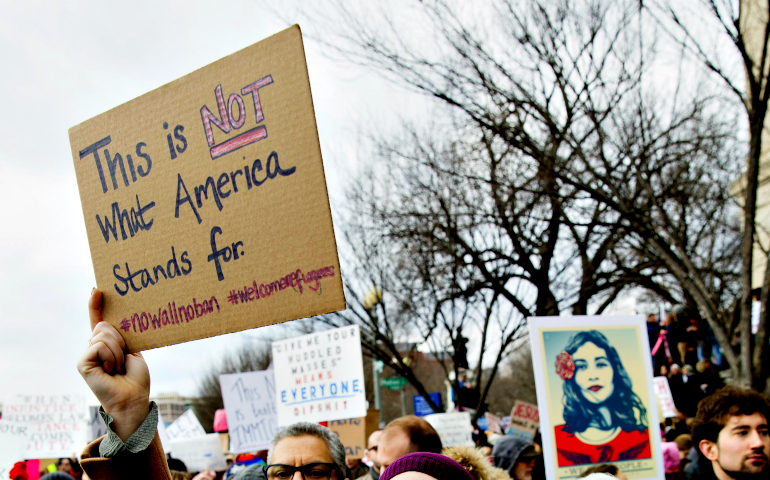 A sign at a Jan. 29 protest near the White House in Washington (CNS/Catholic Standard/Jaclyn Lippelmann)

Who are we? What does it mean to be an American? What kind of nation have we become?

These are the questions that reside beneath the surface of President Donald Trump's executive orders relating to immigrants and refugees. He has offered his answer. We Americans have been "losers" and he aims to make us "winners" again, and a key part of his plan to achieve that nebulous goal is to define others — Muslims, Mexicans, immigrants, the elite, the media — as the enemy.

It is a Manichaean vision that divides the world into us versus them, the good versus the bad. It is a vision that is coarse and unreflective and deranged. We are good people and therefore nothing we do can really be bad. If torture works to make us safe, then to hell with the legal conventions that have wisely proscribed it as a method of interrogation. If trade deals do not give us the lion's share of the benefits, then we should bully our trading partners into signing a new trade deal that is lopsidedly in our favor. If banning Muslims from countries that are majority Muslim, even though none of the terrorist attacks on U.S. soil have been perpetrated by people from these countries, nonetheless, the enemy is defined and the anger is stoked. The derangement is discerned in the claim that somehow the most powerful, most wealthy society in the history of the world is a victim on the world stage.

These are also the questions that prompted thousands of people to abandon their plans for a Saturday evening and head to their local airport to protest Trump's executive orders. They stood with signs of welcome to the arriving immigrants and refugees. Ellis Island is now a museum in New York harbor, but it came alive at JFK and Dulles and O'Hare and Dallas/Fort Worth.

The protesters, when interviewed, spoke of their immigrant friends or ancestors. They spoke the biblical language of welcoming the stranger. They spoke about the principles of law and justice, and they brought immigration lawyers to speak to the specifics.

My favorite story was of a friend in the labor movement who was scheduled to care for a man with multiple sclerosis in his synagogue Saturday night. He called the man's daughter to see if she could cover for him, as he wanted to join the protest at Dulles airport. She not only covered for him, she told him about her friends who have been active in Israeli-Palestinian peace-building efforts and who had learned Arabic. He told her to invite them and, within minutes, they, too, were in a cab headed for Dulles.

Last year, after several countries had closed their doors to Syrian refugees, I remember seeing television scenes of people in Munich welcoming a trainful of refugees at the Hauptbahnhof. As well as serving as the central train station in that beautiful city, the Hauptbahnhof sits abreast the many metro and tram lines the serve the city and its suburbs. One of the stops on a Green tramline is at Dachau. Schoolchildren are brought to the former concentration camp to learn of the ugly consequences of prejudice and bigotry. My eyes filled with tears as the Bavarian people greeted the Syrian refugees with foodstuffs and parkas and flowers. I felt the same way watching the crowds at America's airports this weekend.

It is as clear as day that Trump's vision not only seeks to address long-standing and understandable frustrations among large swaths of the American population, it seeks to stoke the worst instincts of the human heart in order to achieve more power for himself. He is the one who "alone can fix it." He is the one who knows better than the generals.

I do not fancy he will be able to deliver on his promises, but if he can distort enough information, create enough fake news, keep the media and his political opponents (and he does not distinguish between the two) on their heels amid the chaos he creates, juice the economy on the sugar high of tax cuts for the rich, grandstand at factories that had already decided not to export jobs and claim the credit for the decision, who is to say his vision will not succeed in the short-term political calculus?

We also heard a different vision of our national identity this weekend, one that spoke to the better angels of our nature. "For the Catholic community, the Gospel mandate to 'welcome the stranger' is a searing responsibility, not only in our personal lives, but also in guiding our efforts to create a just society in a world filled with suffering and turmoil," San Diego Bishop Robert McElroy wrote in a statement about the executive orders.

"For this reason, the historic identity of the United States as a safe haven for refugees fleeing war and persecution is for American Catholics both a source of justifiable pride and an unswerving religious commitment, even as we recognize that at shameful moments in our national history prejudice, fear and ignorance have led our country to abandon that identity."

We heard Chicago Cardinal Blase Cupich state: "It is time to put aside fear and join together to recover who we are and what we represent to a world badly in need of hope and solidarity. 'If we want security, let us give security; if we want life, let us give life; if we want opportunities, let us provide opportunities.' Pope Francis issued these challenging words to Congress in 2015, and followed with a warning that should haunt us as we come to terms with the events of the weekend: 'The yardstick we use for others will be the yardstick which time will use for us.' " The cardinal's statement got so many hits, the archdiocesan website crashed.

Who are we? Most of the political debates in recent years have focused on differences of policy, not differences of polity. As I indicated last week, the threat of authoritarianism is real. It will become more and more of a threat unless the political, and moral, opposition emerges with a coherent response and a different, more hopeful and inclusive answer to the question of national identity that Trump has placed at the center of our political and moral life. The contours of that opposition will be the subject of my post tomorrow.