Where can we find a healthy patriotism? 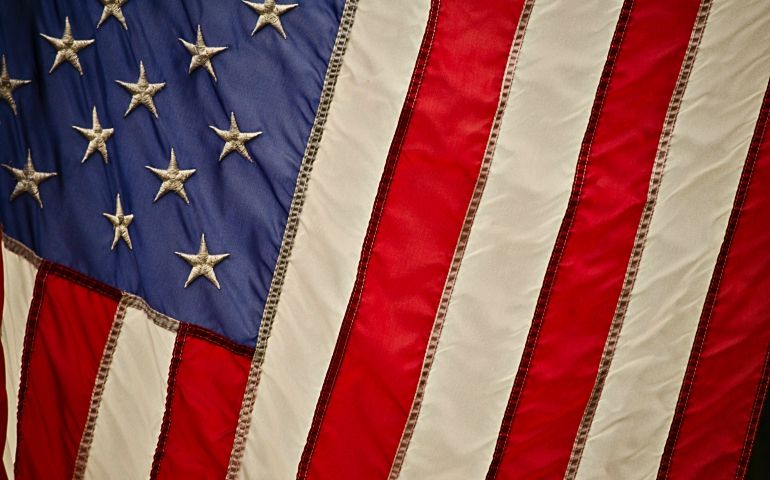 Tomorrow is July 4, a time for parades and fireworks and cookouts. At most parishes yesterday, the congregation sang "America the Beautiful" or "God of Our Fathers" to mark the secular holiday. It is also a time to reflect on the propriety of patriotism, distinguishing a healthy variety of love of one's own country from the unhealthy kinds. And, this year, it seems to me that there are two unhealthy kinds, one on the left and one on the right.

One unhealthy kind of patriotism is found among those whom Jeane Kirkpatrick famously called the "blame America first" crowd and it is associated with the political (and religious) left. Its formative experience was the Vietnam War: the lies told by political and military leaders, the final futility of the entire enterprise, the almost daily evidence of inhumane treatment of civilians through the use of napalm, the fracturing of American society and, specifically, of the foreign policy consensus that had shaped American politics for a generation.

Kirkpatrick was not entirely right and she was not entirely wrong. Her speech, delivered at the 1984 Republican National Convention, whitewashed the atrocities being perpetrated in Central America by right-wing governments and paramilitary organizations, even as she was correct that the emergence of communist regimes in Latin America was potentially even worse for the impoverished people of that region.

The disposition to blame America first was not restricted to concerns about Central America and today it tends to look as much at our own nation's past as to any misdeeds perpetrated abroad. The penchant for pulling down heroes of the past, from Thomas Jefferson to Woodrow Wilson, evaluates historical figures by modern-day standards, and ignores the good that was often done by these obviously flawed men, and they were mostly men. Jefferson was not great because he owned slaves, but he was still great despite his ownership of slaves. Wilson was a fierce anti-Catholic bigot, but his vision of a liberal internationalism is still important.

The late Cardinal Francis George once wrote about this tendency to turn American moralism on itself. "If the United States is not the beacon, the universally inclusive 'city on a hill,' then it must be the sinkhole, the evil source of global exploitation," George wrote in his book Inculturation and Ecclesial Communion. "Sometimes this judgment is religiously justified as a prophetic stance. Sometimes, in more sociological terms, disillusion calls itself countercultural. Criticism of institutions and social structures is not, however, countercultural in an anti-authoritarian society such as that of the United States, a country where the mass media lionize dissent. Nor is every social criticism prophetic. The Hebrew prophets, critical though they were, never told their people that they should renounce their past and cease to be Israelites. Rather, the prophets pointed to God and called their people back to their original covenant, to the best in themselves and their history. Modern alienation is not a biblical virtue."

I fear that the confusion of modern alienation with biblical virtue still haunts some on the religious and political left. I am disturbed by the bizarre denunciation of "cultural appropriation" now found among some leading black scholars, as if cultural appropriation were necessarily a bad thing, and as if it were the principal problem facing black America today.

I worry that a healthy suspicion of the militarization of society still leads too many on the left to disparage the men and women in the military. And, in foreign affairs, there are very few liberal politicians to whom I would feel entirely comfortable entrusting our nation's foreign policy: The sudden chic attached to anti-Israeli propaganda is only the most obvious evidence of the uncritical intellectual fads that pass muster in the academic left and beyond.

Yet, at this moment in our nation's history, it is the unhealthy faux patriotism of the right that is more concerning, not least because the levers of political power are in the hands of those whose political ideology inclines them to jingoism, xenophobia, nativism and a disparagement of international solidarity. The ideology combines with a psychological trait, the attributes of a bully, to produce a nationalism so insecure it must degrade and diminish others, a toxic mess that is not only concerning, it remains shocking.

Preserve the sense of shock. We can never let this sensation become normalized.

But Trump did not just happen. The way was paved by a society that has allowed its educational standards to disintegrate. The way was paved by the endless celebrations of our veterans, who deserve our respect to be sure, but no more so than doctors who tend the sick and the union organizers who defend the workers and the journalists who expose the crooks.

The way was paved by the confusion of bluster with strength that has become the received interpretation of the Reagan years, although the only country we invaded on his watch was Grenada, and when terrorists killed more than 200 American Marines in Beirut, President Ronald Reagan cut and ran.

The way was paved by the military-industrial complex's decision to place contractors in every congressional district and the cowardice of most in Congress who are unwilling to challenge military spending.

When Trump talks about "America First," he turns a healthy love of one's own into an unhealthy dismissal of the universal brotherhood of man, which is founded in the universal fatherhood of God. Of all the countries in the world, this makes even less sense in America, where you are always standing alongside someone whose ancestors came from a different place from your own.

That evangelical Christians remain Trump's most stalwart supporters illustrates the theological degradation that has taken place over many years in too many evangelical churches, which I wrote about in my book God's Right Hand.

I would add — actually, borrow from Leon Wieseltier — the observation that to love a thing because it is one's own is to know very little about it. There is a joy in sharing one's own that is more humanizing than the nativists can experience.

Regular readers of this blog will recall the speech delivered by Bishop Robert McElroy at January's "Erroneous Autonomy" symposium at the Catholic University of America, which was published here at Distinctly Catholic. The entire speech is well worth a reread, but I will conclude this commentary with these wise words from the bishop that seem worthy of reflection on our national holiday:

The question of American exceptionalism has long been a source of contention in historical and political debate. And this exceptionalism has been characterized in many different ways. In my view, the most important form of exceptionalism which we might claim flows from the reality that we as a nation of immigrants are not tied together by connections of blood, but rather by the set of aspirations which our Founders set forth in 1776 and which they both succeeded and failed to attain. Thus, patriotism for us as Americans is an aspiration renewed in every age by understanding the noble elements of our nation's birth and the defects of its original vision. And our patriotism is not a foundation for pride, but an ever-deepening challenge to ennoble our culture, society and government. Such is the nature of true greatness for America.

Politics | Where can we find a healthy patriotism?

US activists answer: What is patriotism?