The World Meeting of Popular Movements strikes a needed chord 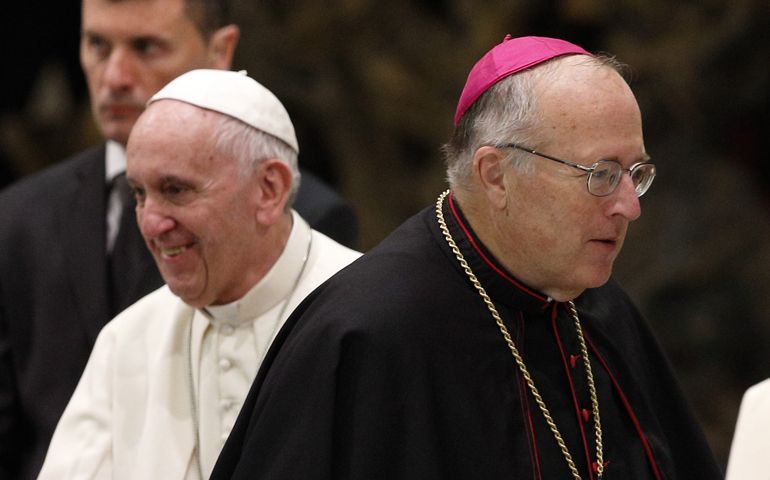 Bishop Robert McElroy of San Diego walks away after greeting Pope Francis during his general audience in Paul VI hall at the Vatican Nov. 23, 2016. (CNS/Paul Haring)

The World Meeting of Popular Movements (WMPM) in Modesto, Calif., was a huge success by all accounts, not merely because of what was said there, but simply because the event happened in the first place. My colleague Brian Roewe reported on the WMPM here and here.

Last week, I reviewed a book that focused on the work of Bishop Bernard Sheil, auxiliary of Chicago, as he sought to advance the clear social doctrine of the church on a range of issues including interracial relations. We have all seen the pictures of Washington's Archbishop Patrick O'Boyle standing on the steps of the Lincoln Memorial at the rally when Dr. Martin Luther King Jr. delivered his "I have a dream" speech. And, we can remember the prophetic pastoral letters the U.S. bishops issued on peace and the economy in the 1980s.

Those memories have, in recent years, faded. Many U.S. bishops rightly come to Washington each January for the "March for Life," but the sense that the church is engaged in foundational issues of social justice, and across a broad spectrum of issues, that sense has been confined mostly to our memories, and dusty memories at that.

The WMPM dusted off those memories and showed a Catholic church ready to engage the cause of social justice anew. From heaven, I could imagine Bishop Sheil smiling on Archbishop Jose Gomez as he spoke about the fear in the immigrant community. "I do not like the harsh tone, the sense of indifference and cruelty that seems to be coming out of this new administration in Washington. They are playing with our emotions, with people's emotions, toying with their lives and futures, and that's not right," Gomez said. "A person is still a person even though he is without papers." For those who know just how mild-mannered the archbishop is, those are fighting words.

But, the star of the show was Bishop Robert McElroy of San Diego, who is also a mild-mannered man, more given to deeply researched academic talks than to rabble rousing prophecy. This past weekend, McElroy took on the role of prophet and his words should be heard by Catholics throughout this country.

But, important for understanding the role of the church in social life, we can't stop with disruption. "We cannot merely be disruptors, we also have to be rebuilders," McElroy said. "We have to rebuild this nation so that we place at its heart the service to the dignity of the human person and assert what that flag behind us asserts is our heritage: Every man, woman and child is equal in this nation and called to be equal." Unlike the nihilism we see on the alt-right, we Catholics disrupt to protect the vulnerable and we always seek to rebuild social ties on the basis of solidarity.

I was even more struck, however, by a different part of McElroy's talk. "The fundamental political question of our age is whether our economic structures and systems in the United States will enjoy ever greater freedom or whether they will be located effectively within a juridical structure which seeks to safeguard the dignity of the human person and the common good of our nation," McElroy said. "In that battle, the tradition of Catholic social teaching is unequivocally on the side of strong governmental and societal protections for the powerless, the worker, the homeless, the hungry, those without decent medical care, the unemployed. This stance of the church's teaching flows from the teaching of the Book of Genesis: The creation is the gift of God to all of humanity. Thus in the most fundamental way, there is a universal destination for all of the material goods that exist in this world. Wealth is a common heritage, not at its core a right of lineage or acquisition. For this reason, free markets do not constitute a first principle of economic justice. Their moral worth is instrumental in nature and must be structured by government to accomplish the common good." (Emphasis mine.)

If you attend "Acton University," a week long series of talks sponsored by the nefarious Acton Institute, or sign up for one of the Napa Institute’s conferences, you will encounter people who do think that free markets are a first principle of economic justice. You will also find people who argue against strong governmental and societal protections being placed on market mechanisms. It is welcome to hear a bishop so unequivocally speak up for the traditional teaching of the Church on these matters.

I do register a slight, but important, difference of opinion from Bishop McElroy. When he speaks of the "moral worth" of free markets as "instrumental," I am in agreement, but I think I am more suspicious of markets than the bishop. Increasingly, it seems clear to me that markets are not morally neutral. They bring a set of values within them that, in many ways, frustrate solidarity and certainly place claims of freedom above claims of truth. I remember this passage in David Schindler's Heart of the World, Center of the Church, when he spoke about the moral neutrality ascribed to the market by Michael Novak: "Novak's position rigs the game: all the while it claims to be creating space or a market for competing moral visions, it is in fact, simultaneously, pouring the Scottish Enlightenment in this putatively 'empty' space or 'free' market." N.B. Novak died this past week and I cannot mention him here without noting that, however deep our disagreements, he was a genuinely lovely human being.

Nonetheless, how wonderful it was to hear a bishop unafraid to echo Pope Francis' clear and prophetic concerns about modern economic life! How wonderful to have two bishops, Gomez and McElroy, confront the new administration for its harshness and cruelty! Cherish the memories of Sheil and O’Boyle, to be sure, but it is a different kind of joy that fills the heart when we see a new chapter being written in the story of the Catholic Church’s fight for social justice in our land.

The World Meeting of Popular Movements strikes a needed chord

Wishing I Were a Fly on the Wall

Happy Feast To Us!