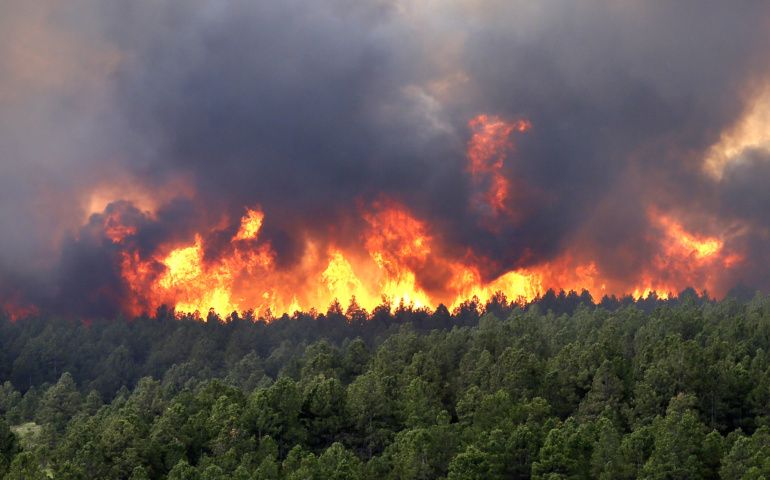 Denver hit the 100-degree mark Monday, which became the earliest date for the mile-high city to reach triple-digit temperatures. The heat wave, in addition to high winds and low humidity, has ignited multiple wildfires along Colorado's heavily populated Front Range.

The Black Forest Fire broke out midday Tuesday in Colorado Springs. By Wednesday morning, it had burned about 8,000 acres, damaging at least 100 homes and forcing 2,500 more homes and businesses to be evacuated.

The Black Forest Fire "has become the most destructive in Colorado history," The Associated Press reported Thursday.

Last summer, similar reports called the Waldo Canyon Fire the worst in the state's history after it consumed 346 homes (including a Benedictine sisters' mother house) and caused $353 million in damage.

Colorado is seeing a rise in disastrous fires, and according to the United States Department of Agriculture, it isn't alone.

In 2012, wildfires burned a record 9.2 million acres in the U.S., and as a recent report released by the USDA indicates, that number is on the rise because of climate change. The report estimates that within the next 40 years, the acreage burned by wildfires will be at least twice as destructive, burning about 20 million acres nationwide each year.

Rising temperatures across the Front Range have contributed to the dry climate succumbing to intense fires. Seventy percent of Colorado is experiencing "severe" or "exceptional" drought, and along with nearly half of the western United States, the state remains locked in the worst drought in 60 years.

The drought has caused warmer winters and longer summers. Higher temperatures have allowed the pine beetle and spruce bark beetle to survive through the year, resulting in the biggest outbreak in the last 125 years.

The pine beetle attacked more than 750,000 acres in 2011, and it is widely theorized this increasing beetle population killed the trees fueling the recent fires.

A study published by the Canadian Journal of Forest Research in 2010 reviews historic survey records to ascertain whether recent beetle outbreaks are an example of how climate change impacts North American forests.

Three million acres of Colorado's pine forests have been infested by the mountain pine beetle since 1996, according to the study. In addition, "bark beetles killed 10.5 million lodgepole pine trees in Colorado between 2002 and 2007, a 10-fold increase in mortality over the previous 5-year period," the study said.

Colorado forests have been harvested in "epidemic levels" by pine beetles, the study said. Pine beetles have killed 70,000 square miles of trees -- an area the size of Washington state.

Pine beetles are just one outcome of rising climate temperatures and only one contributor to the state-wide fires. The USDA is responding to these accelerating climate changes.

In February, the USDA released two reports summarizing the scientific literature on climate change and how to adopt strategies to fight fires affecting forests across the United States.

"These reports present the challenges that U.S. agriculture and forests will face in this century from global climate change," said William Hohenstein, director of the Climate Change Program office in USDA's Office of the Chief Economist, said in a press release. "They give us a framework for understanding the implications of climate change, in order to meet our future demand."

The USDA Office of Communications said that while U.S. agriculture and resource management have been successful at combating climate variability in the past, "the accelerating pace and intensity of climate change presents new challenges to be addressed."