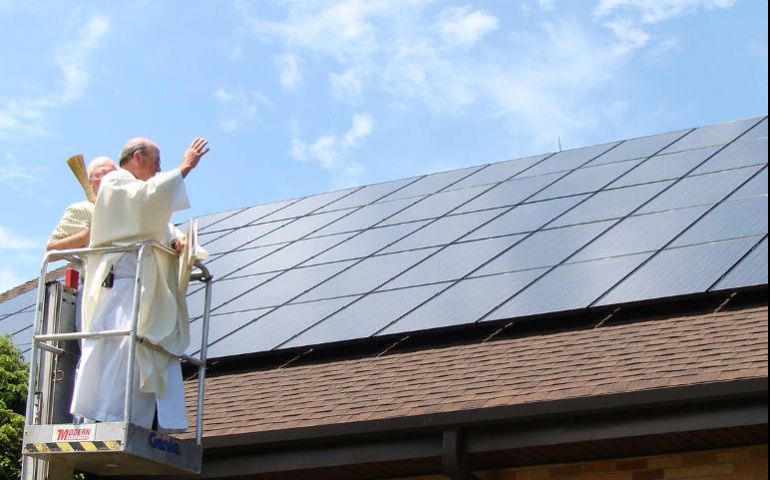 As you pass by the Church of the Presentation, in Upper Saddle River, N.J., you’ll notice a not-so-ordinary feature glimmering in the sunlight on top of its roof.

While an outward sign of the parish’s commitment to energy conservation and fiscal responsibility, it serves as just one piece of an integrative and intentional effort to promote environmental stewardship across its countless ministries and 4,000 families.

The collaborative energy has transformed Presentation into a GreenFaith sanctuary.

GreenFaith is an interfaith coalition that offers resources and assistance to religious communities seeking to become better environmental stewards. The organization offers a two-year certification program to achieve GreenFaith sanctuary status, distinguishing a religious group as a leader in environmental sustainability. The requirements and fees (Presentation paid $1,300 to enroll) vary depending on an institution’s size, denomination and location, but fall into three categories: spirit, stewardship and environmental justice.

To date 15 religious communities have passed the certification process, predominantly Protestant and Jewish congregations. When Presentation made the decision to pursue certification, it began a path to becoming the first Catholic Greenfaith community, an honor it received during a celebration Mass Oct. 20.

“I think it’s an important symbol and an important mark of the community that it means a lot for us to kind of budget in a lot of good ecological stewardship initiatives. It speaks to our values as a faith community,” Stagg told NCR.

“We were able to affirm our beliefs in a Creator God who has called us to be responsible stewards for our planet’s health and life,” said Fr. Ed Ciuba during a homily the day before the official presentation. “Being named a ‘Sanctuary’ is not a conclusion, but a continuation of those efforts.”

The initiative began in 2011 through the parish’s peace and justice ministry -- with parishioner Denny Foley playing a leading role -- who learned of GreenFaith through a speaker it had brought to the group.

“It seemed a systemized way for us to really make a commitment to do something, and it would get everybody speaking publicly that this is what we wanted to do,” said Beth Begley, a member of the peace and justice ministry.

A first step had the parish reviewing GreenFaith requirements in light of already ongoing efforts. As early as 2009, it had begun the process of placing solar panels on the church. It had also updated its bathrooms to use less water and replaced paper towels with hand dryers.

But those initiatives only scratched the surface of what GreenFaith necessitated. The stewardship category alone required 25 initiatives in seven separate areas. In addition, the parish would need to hold six eco-themed worship services and a half dozen annual educational classes to satisfy the bulk of the Spirit conditions.

To lead the numerous projects, the parish assembled a Green Team, led by Stagg and made up of members of the parish staff and parish council, as well as representatives from the St. Francis Ministry, peace and justice ministry, and liturgy and youth committees. That broad parish coalition formed a solid base toward achieving the goal of certification.

“With the pastor embracing it, I think that’s always an important point,” said Connie LaMotta, chair of the St. Francis ministry. “But with the community of leaders in this area really embracing it, that made it move.”

One by one, the parish crossed the numerous tasks off the list.

They installed more efficient light bulbs and upped their recycling efforts. They switched to greener cleaning products and hired an environmentally conscious lawn care crew. They worked with other parish committees and groups to abandon bottled water at meetings for pitchers and coolers, and replace Styrofoam products with recycled paper products, even if it meant a higher cost. On top of that, they built birdhouses, installed beehives, planted an organic garden, and invested $70,000 in establishing a Chartres-style labyrinth on the property.

In terms of worship, they added seasonal, environmentally themed services, including a rebirth-focused liturgy in the spring, followed by a “first fruits” service in the summer. An outdoor bonfire and creation story would accompany the Easter Vigil liturgy, while Stagg and other priests would deliver sermons throughout the year emphasizing the environment.

Outside the Mass, Presentation implemented an annual Green Fair to connect faith with actions to protect and promote creation. Movie nights reinforced those themes, as did a pamphlet written by Ciuba, titled Why Should We Care About Planet Earth, Our Home?, which was distributed to all parish families. They brainstormed on ways to integrate environmental care into the summer Bible camps for kids, and planned eco-themed field trips to nearby wetlands and organic farms.

The steps not only fulfilled GreenFaith requirements, but instilled a concern for the earth into the parish’s DNA.

“What’s fundamental in our parish is being lovers of God looking to grow spiritually, and being a green parish is just another dimension of doing that,” LaMotta said.

Added Begley, “Just like I think justice and concern for the poor are part of our baptismal calling, I think care of the earth is also.”

But seeing how environmental decisions impacted the poor proved more difficult than their ties to worship and stewardship.

“It was a new connection for many, many people who already were environmentally committed,” Begley said. “… They didn’t realize the disproportionate influence that anything from putting an incinerator or toxic waste site, any of that had on poor people.”

“We don’t see fracking, we don’t see lots of toxic conditions in our area, so I think that’s probably the hardest to teach people,” Stagg said.

To begin making that connection, the parish reached out to the Ironbound community in nearby Newark. The neighborhood, home to 50,000 people where one in four lives in poverty, is filled with abandoned and shuttered factories and industrial sites, with high rates of asthma among both children and adults.

Looking for ways to help, Presentation parishioners partnered with community groups to plant gardens and clear debris, and have offered legal services and further support of their efforts to limit pollution. In addition, they joined a petition to block storage of toxic fracking waste in the state, with some itching to contribute more, Begley said.

Looking back, Presentation can see the signs of its labor. People inside and outside the parish pray and contemplate as they walk the labyrinth. The solar panels have slashed energy costs in half, while Stagg has seen a contagious energy grow in his parishioners, not ready to rest on their accomplishment but to continue moving forward.

“It’s just a sign that the community wants to leave the earth a better place than when we got here,” he said. “And that’s what we want to do with faith -- we want to pass on our faith to the next generation … and I think good ecological stewardship of the earth is a good chunk of that.”