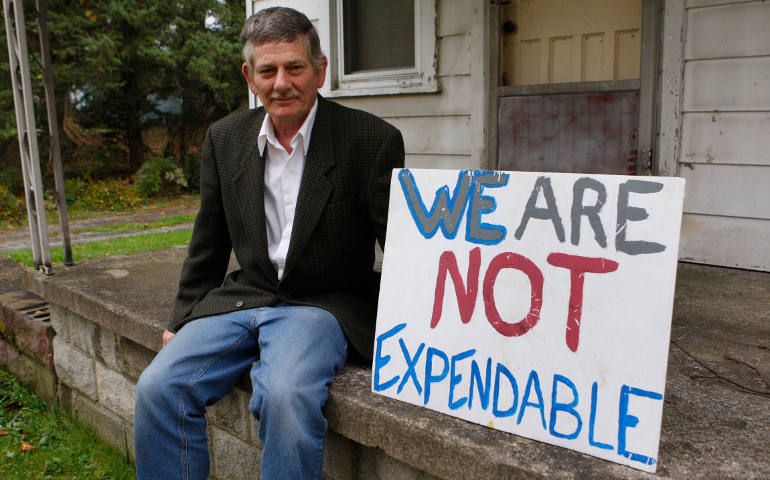 John Williams, a member of St. Stephen Parish in Niles, Ohio, is shown Oct. 16 with a sign he often carries to protest fracking throughout eastern Ohio. (CNS photo /Dennis Sadowski)

CHERRY VALLEY, Pa. — The golden sunrise on crisp fall mornings reveals a shimmering silver-gray fog that enshrouds the farms in Cherry Valley below the homestead on Eakin Knob that Michael and Karen Bagdes-Canning have nurtured for the past 30 years.

The Bagdes-Cannings rise early most mornings to care for the chickens and turkeys they raise and the vegetables that will find their way to their dinner table. Colorful flowers, the last vestiges of summer, fill the gardens along the walkway to their front door. One day a week they take care of their 2-year-old granddaughter, Lochlin, while their son and daughter-in-law are at work.

On a mild fall day Michael toured sites of natural gas wells and pump stations in Butler County, checking out new structures going up and existing ones that play an integral role vital to America's energy needs. He said wells seem to pop up almost overnight in some locales as energy companies seek to tap the Marcellus Shale formation thousands of feet below the Pennsylvania landscape.

It's the placement of the wells and an industrial process known as slick water hydraulic fracturing, or fracking, that the Bagdes-Cannings fear.

They said they are afraid of the potential for groundwater and surface water contamination and polluted air caused by the release or escape of chemicals from the wells. And they are concerned about the hundreds of trucks that pass on narrow roads carting water from public reservoirs, rivers and streams to well sites to be used in the process.

As leaders in the environmental group Marcellus Outreach Butler, the couple has joined with dozens of Butler County residents to call attention to the dangers they believe fracking poses to people's lives. They said their work is largely motivated by their Catholic faith and the legacy they leave their grandchildren.

"I think we're called to be stewards of the planet," Michael, 60, a longtime member of the Cherry Valley Borough Council, told Catholic News Service.

Karen, 58, who taught autistic children before retiring, said she was just as concerned about the future facing the couple's grandchildren.

"The plan," she explained, "was to be involved with the grandkids, organic farming, the animals, feeding ourselves, living a healthy lifestyle. Then we heard about this [fracking] and we thought that's going to be all shot to hell."

The industry maintains that their worries are overblown, that fracking is safe and has a 66-year-long track record to prove it. Until the 1990s, fracking was limited in scope, but advances in horizontal drilling technology led to the burgeoning development of natural gas fields nationwide. It came to Pennsylvania in 2006.

He has seen normally healthy people become ill with nausea, severe nose bleeds, unexplained skin rashes, breathing difficulties, hair loss and even leukemia where the symptoms developed only after a well has been constructed and the fracking process was executed. He has seen playful pets die after their owners unknowingly provided them contaminated water.

The Bagdes-Cannings keep a one-gallon container of orange-tinged water collected in August from a home in a rural community known as the Woodlands near Butler, Pa., to show what came out of one homeowner's tap after a well was put into operation nearby.

Michael acknowledged that it is difficult to legally prove the ill health of residents to natural gas drilling. But he said he would rather be safe than sorry and wants to see stronger regulations of the natural gas industry, not just in Pennsylvania, but across the country.

The couple maintained they are speaking out for future generations.

"What kind of thing are we leaving our grandchildren?" Michael said of fracking. "How am I going to look at [my grandson] and see the planet is irretrievably harmed? What am I going to say when he asks 'What did you do?' I gotta say 'I did something, at least I tried.'"

The Bagdes-Canings are not lone Catholics concerned about fracking.

About 55 miles to the west of Cherry Valley, near Niles, Ohio, John Williams has made the Westwood Lake Park, a mobile home community, a second home of sorts.

The member of St. Stephen Parish in Niles regularly visits residents to keep an eye on a recently drilled well in a farm field just outside of the park. The nearest homes are about 500 feet from the well. A few of the park's 800 residents have complained about respiratory illnesses, but more were concerned with the loud noise from periodic flaring of the well throughout the fall as operators tested the purity of the natural gas being produced.

Williams, 57, credits the Sisters of the Humility of Mary who taught at the parish school he attended, for his awareness of the environment. "We had good nuns," he said.

For the past two years, Williams has devoted his life to raising awareness of the fracking process. He converted a 1992 Mercedes 300 to run on vegetable oil, and he has sold many of his possessions, deciding it was time to live as simply as possible so he could continue his mission.

Williams is a regular at meetings of the Niles City Council and the Trumbull County commissioners, carrying folders with information about the natural gas industry and Ohio's licensing process gleaned from public records. At times he goes door-to-door in the community, looking to talk with anyone who will listen.

His efforts have met limited success. He and others succeeded in August in getting the City Council to adopt a community bill of rights that essentially banned shale gas and oil drilling. However, it was rescinded within weeks when industry supporters and construction union members lobbied council members, citing the need for jobs in the once heavily industrialized region.

"I feel a responsibility to the planet and to my local city here," Williams said. "I love Niles."

Editor's Note: This is the fourth in a six-part Catholic News Service series examining the practice of hydraulic fracturing for natural gas development and Catholic teaching on the environment. The stories will appear at Eco Catholic semiweekly through Jan. 2. Read the earlier stories: Part 1, Part 2, Part 3. For recent NCR coverage on fracking, see "Sisters of Loretto resist proposed pipeline through Kentucky land;" "Students scrutinize fracking lease at Franciscan University" and "In global fight against fracking, faith community should lead."