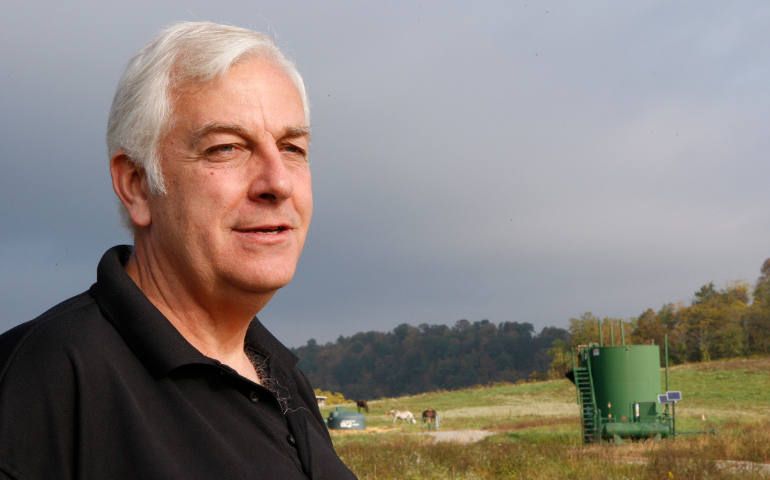 David Headley stands on his property Oct. 4 near a natural gas well in rural Fayette County, Pa. He and his wife, Linda, are among several plaintiffs in a lawsuit seeking to have several wells and pipelines declared a nuisance and removed. (CNS photo/Dennis Sadowski)

POINT MARION, Pa. — When David and Linda Headley bought their 116-acre farm in rural Fayette County near the West Virginia border in 2005, they thought they were buying their dream property, a place to build a home, raise a family and enjoy the outdoors.

What they ended up with, they told Catholic News Service, was a nightmare.

These days when David and Linda and sons Adam, 5, and Grant, 17, look out from their front porch they see the telltale signs of a natural gas well less than 600 feet away: condensate tanks, vent pipes, pipelines and control valves.

The well was built in 2009, a few years after the Headleys moved to their new home. They find it unsightly and contend the invasive noises and toxic odors associated with it are a nuisance.

Most worrisome is the periodic unexplained illness afflicting Adam when well operators arrive to vent the tanks. The process discharges volatile organic compounds and other byproducts into the air and onto the land. When the Headleys see the workers coming, they head indoors and turn on a specially installed ventilation system.

The situation led the Headleys to join a civil lawsuit with five other nearby property owners. It charges several natural gas companies and pipeline operators with operating a nuisance, negligence and recklessness.

Filed June 13 in Allegheny County Common Pleas Court in Pittsburgh, the lawsuit is the last hope the plaintiffs have to resolve their grievances, David said.

"My hope is that they pull this pollutin' mess out of my ground and reclaim my ground to its former state and have us a nice safe place to live with our kids and our animals," he said.

"I want them out of my life. I want 'em gone. I don't care if they make a billion dollars off the gas. I didn't lease the ground to them. I didn't want them here. If they want to take the gas, they can go over to the neighbor's over here, where the neighbors have leased, and run a line under and take my gas from there."

The Headleys and their neighbors say several wells, related pipelines and a nearby compressor station adversely affect their lives and disrupt the enjoyment of their properties.

The lawsuit is not so much about property damage as it is about quality of life issues, said Charles Speer of Kansas City, Mo., who filed the case on behalf of the families.

"Everybody wants to be safe and secure in their homes," Speer said.

The Headleys' concerns focus on the fact that the well on their land is drilled deep into the natural gas-rich Marcellus Shale formation. Such wells have become common across Pennsylvania since 2006 as energy companies seek to tap vast deposits of natural gas a mile beneath the surface.

Freeing the natural gas involves a process known as slick water hydraulic fracturing, or fracking. It uses millions of gallons of water mixed with sand and a chemical cocktail, all pumped under high pressure a mile or more underground and then horizontally up to two miles to fracture the shale. The sand particles hold the fractures open so the gas -- and in some cases complex hydrocarbons such as benzene, ethane, propane and toluene -- can flow up the well.

The plaintiffs said in the suit that their water sources have been tainted with natural gas (methane) and other naturally occurring toxic compounds released by the fracking process. David said he was able to set fire to a small spring on his property and showed visitors a video of water igniting when exposed to a small flame.

A second video showed energy company workers venting the condensate tanks. A white cloud rose above the tanks and accumulated in a low spot on the property.

Linda said Adam experiences intense stomach pain when the venting occurs. At times she and David have rushed him to the nearest hospital, 15 miles away in Morgantown, W.Va. But doctors have had no specific diagnosis, she said.

Brian Begley of Atlas Energy Resources, the well operator, and Tom Droege, a spokesman for Williams Co., the pipeline operator, declined to comment.

A similar lawsuit has been filed on behalf of Fred and Janet McIntyre and their daughter, Savannah, 11, of Connoquenessing Township, Pa. The Allegheny County Common Pleas Court suit charges that the family's water supply was contaminated by fracking fluids that seeped out of wells operated by Rex Energy Corp. of State College, Pa.

The McIntyres live in the Woodlands, an old hunting camp that has been converted to permanent residences. About 200 people live in the community of modest houses, cabins and mobile homes. The roads are rocky and unpaved. Residents get their water from wells.

The McIntyres and their attorney, David A. McGowan, said they could not comment while the lawsuit is pending.

However, Fred and Janet were among several Woodlands residents featured in a YouTube video on the situation. In it, Fred talks about contracting a serious skin rash and nose bleeds while Janet attributes her leukemia to the fouled water.

The video also shows residents drawing black, orange and foaming water from faucets. Residents said until the wells went in, their water quality was good.

The lawsuit charges that 31 wells around the Woodlands perimeter are a nuisance. The wells nearest the McIntyres' small home are blamed for polluting their well and causing Fred and Janet to experience symptoms that are consistent with exposure to toxic chemicals. The suit seeks reimbursement for expenses the McIntyres have incurred, including buying clean water, and an injunction to end the "nuisances, wrongful acts and damages" by closing down Rex Energy's wells.

Rex Energy did not respond to calls for comment.

John Stolz, professor of environmental microbiology at Spiritan-run Duquesne University in Pittsburgh, undertook a study of Woodlands water sources in 2011. He said he found more than 50 families that had water quality problems.

The tests found manganese as the primary contaminant. Other pollutants included iron, sulfates, salts and some complex hydrocarbons. Stolz said all are associated with natural gas extraction but also with coal mining, which occurred in the region in the past.

Stolz and his team also looked at state DEP records that showed a correlation when the wells were drilled and then fracked and the dates residents began experiencing problems with their water.

Even so, there is no "smoking gun," Stolz said, because many other factors related to geography and well construction must be studied before a definitive conclusion can be reached.

Until February 2012, Rex Energy paid for fresh water to be trucked in to the affected families. The practice was discontinued after the state DEP determined that water sources had returned to safe levels as measured by pre-drilling tests.

Since then, local churches have taken up weekly water collections for the families.

Editor's Note: This is the fifth in a six-part Catholic News Service series examining the practice of hydraulic fracturing for natural gas development and Catholic teaching on the environment. The stories will appear at Eco Catholic semiweekly through Jan. 2. Read the earlier stories: Part 1, Part 2, Part 3, Part 4. For recent NCR coverage on fracking, see "Sisters of Loretto resist proposed pipeline through Kentucky land;" "Students scrutinize fracking lease at Franciscan University" and "In global fight against fracking, faith community should lead."