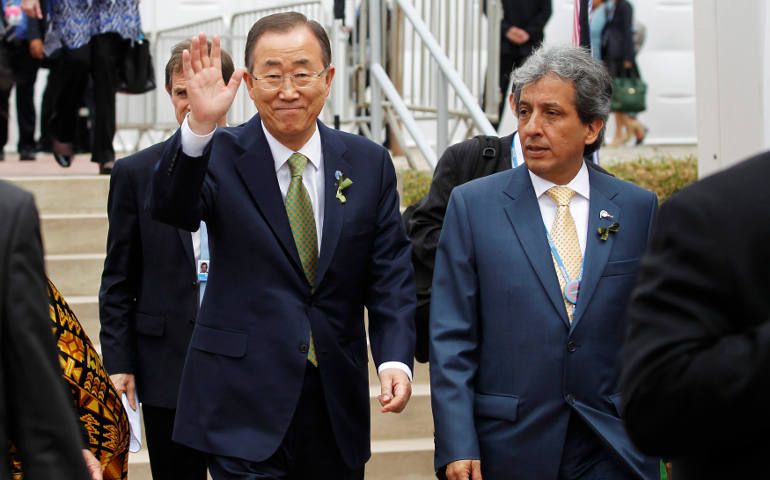 Peruvian Environment Minister Manuel Pulgar-Vidal, right, walks next to U.N. Secretary-General Ban Ki-moon. as they arrive for the opening of the U.N. Climate Change Conference in Lima, Peru, Dec. 9. In a message to Pulgar-Vidal, Pope Francis said the time to so lve the problem of climate change "is running out." He also insisted climate change is a serious moral problem. (CNS photo/Enrique Castro-Mendivil, Reuters)

Acting now on climate change “is a grave and moral responsibility,” Pope Francis said to international negotiators at the United Nations climate conference in Lima, Peru.

In the message, addressed to Manuel Pulgar-Vidal, Peru’s environmental minister and president of the 20th Conference of the Parties (the U.N. climate summit’s official name), Francis said the current debate about climate change affects all humanity, particularly the poor and future generations.

“It is a grave ethical and moral responsibility,” he said.

The pope asked that the current conference and future climate meetings are “a dialogue imbued with … the values of justice, respect and equality,” and produce solutions and initiatives that serve all people.

The message comes on the second-to-last day of the Lima climate conference, which began Dec. 1. High-level negotiations kicked into gear Monday. Delegates representing 196 countries are working to draft an outline text of a binding international agreement -- one that includes commitments from each country to reduce greenhouse gas emissions, and also financial pledges from developed countries -- that could then be signed at next year’s meeting in Paris. The Lima talks are set to conclude Friday, though previous climate negotiations have spilled into additional days.

The pope is expected to publish an encyclical in the first part of 2015 on the environment and human ecology, and presumably, discuss climate change. In his message Thursday he offered a blessing for all those in Lima and the countries represented. In particular, he expressed his closeness to the work toward a global climate treaty, that it “be carried out during these days with an open and generous spirit.”

At the same time, he acknowledged what scientists and environmentalists have repeatedly stated: a global response to climate change must come sooner rather than later.

“The consequences of environmental change, which are already dramatically felt in many states, especially the islands of the Pacific, remind us of the grave consequences of mismanagement and inaction.

“The time for seeking global solutions is running out. We can find suitable solutions only if we act together and in agreement. There exists, however, a clear, definitive and unpostponable ethical imperative to act,” he said.

According to Vatican Radio, the pope also referenced the conference’s proximity to the maritime current of Humboldt, which he said not only unites the peoples of the Americas, Oceania, and Asia in a symbolic embrace but also plays an important role in the planet’s climate.

Optimism toward a deal has built, in part due to commitments from the United States, China and the European Union -- together accounting for more than half of global greenhouse gas emissions, according to Climate Action Tracker. U.S. Secretary of John Kerry was expected to arrive in Lima Thursday to take part in the final days of negotiations.

Francis said that an “effective battle against global warming will be possible only through a responsible collective response that sets aside particular interests and behaviours and develops free from political and economic pressures. A collective response that is also capable of overcoming distrust and promoting a culture of solidarity, encounter and dialogue; capable of demonstrating our responsibility for protecting the planet and the human family.”

Editor's note: Want more stories from Eco Catholic? We can send you an email alert once a week with the latest. Just go to this page and follow directions: Email alert sign-up. And check back at Eco Catholic for continuing coverage of the Lima climate talks.