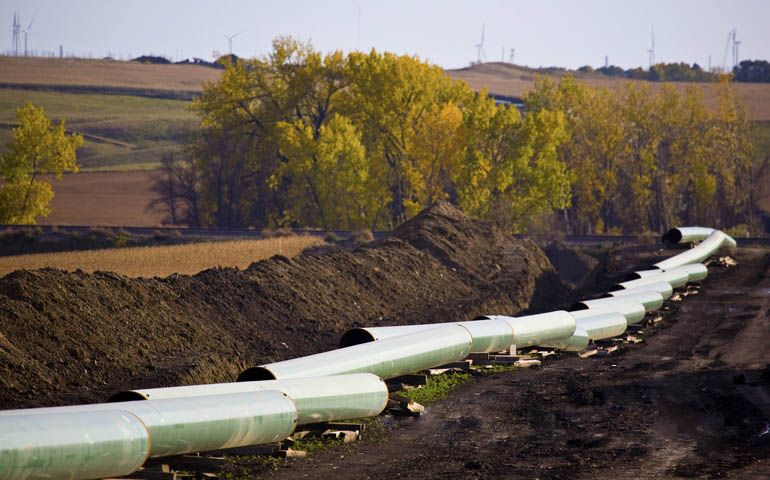 In his second inaugural address, President Barack Obama restated his dedication to climate change as a central priority of his second term.

“We, the people, still believe that our obligations as Americans are not just to ourselves, but to all posterity. We will respond to the threat of climate change, knowing that the failure to do so would betray our children and future generations. Some may still deny the overwhelming judgment of science, but none can avoid the devastating impact of raging fires, and crippling drought, and more powerful storms.”

The words, similar to those he used in his November victory speech, were well received among environmental activists (an online form letter from the Environmental Defense Fund allows individuals to personally thanking the president for his reaffirmation), but at this point, remain just words.

Obama’s first test of his renewed climate change conviction is expected to come in an old battleground, the Keystone XL pipeline.

In January of last year, Obama rejected a plan for the 1,700-mile transnational pipeline that would have brought crude oil from the Athabasca Oil Sands in Alberta, Canada, across the Montana border, through Nebraska, and to refineries located in the southeastern Gulf ports of Texas.

At the time, Obama said his rejection of the permit application was based not on the pipeline’s merits but on “arbitrary nature of a deadline” House Republicans had placed on a decision the president believed prevented the State Department from gathering all necessary information.

But the denial didn’t mean the end of Keystone. The president left open a window for TransCanada, the firm seeking to build the pipeline, to reapply for a permit by including alternate routes, which they did in May.

Keystone opponents insist the pipeline poses not only a danger to the environment through which it would travel, where potential spills could contaminate water sources critical for agriculture and drinking water, but would also compound the climate change issue. They point to reports listing tar sands oil among the dirtiest fossil fuels, and its emissions among the most harmful.

The State Department’s commissioned study on the environmental impact of Keystone found Canadian tar sands crude oil more greenhouse-gas intensive than U.S. sources, and projected Keystone would contribute annually an additional three to 21 million metric tons to the U.S.’s carbon footprint, the equivalent of anywhere between 588,000 to four-million-plus passenger vehicles.

Pipeline supporters say it will pay huge dividends for the economy, the job market, and America’s energy independence.

In recent weeks, the pipeline has regained momentum. Nebraska governor Dave Heineman endorsed Jan. 22 Keystone and its new route proposal, which avoids porous soils of the state’s Sand Hills (a previous sticking point) but still runs above the Ogallala Aquifer, an important water source spanning 174,000 square miles and eight states, including most of Nebraska. [Some estimates suggest the aquifer supports one-fifth of America’s farmlands.] In its report evaluating the Nebraska portion of the pipeline, the state Department of Environmental Quality concluded the impacts of a spill would likely remain at the local level.

Even climate allies in Congress have either reexamined or restrained comment on the pipeline.

During his Secretary of State confirmation hearing, Sen. John Kerry described climate change as “a life-threatening issue” but stopped short of mentioning Keystone. When asked about the controversial pipeline, Kerry, who in 2010 co-sponsored climate-related legislation, said a review process is ongoing at the State Department, who has jurisdiction since the project would cross international borders, and that “it will not be long before that comes across my desk.”

At a press conference Jan. 24 unveiling a bicameral climate task force, Rep. Henry Waxman, D-Calif., turned heads when he labeled the pipeline a small issue in the president’s overall climate plans. Waxman clarified his comments the next day: “What I was trying to say is that our climate policy must be much bigger and more ambitious than just rejecting the Keystone pipeline,” listing reducing carbon from power plants, strengthening energy efficiency and phasing out hydroflourocarbons.

In the Senate, a letter signed by more than half its membership (44 Republicans, nine Democrats) is urging Obama to approve the pipeline:

“Some constituencies have called on you to deny the pipeline and the jobs and energy security associated with it. Because the pipeline has gone through the most exhaustive environmental scrutiny of any pipeline in the history of this country, and you already determined that oil from Canada is in the national interest, there is no reason to deny or further delay this long-studied project,” the letter read.

“We ask you not to move the goalposts as opponents of this project have pressed you to do. We urge you to choose jobs, economic development and American energy security.”

A similar letter gathered 145 signatures in the House. The Senate letter was organized by senators Max Baucus, D-Mont., and John Hoeven, R-N.D.; last February Hoeven sought to bypass a presidential permit by proposing an amendment to a transportation bill authorizing construction, which was eventually defeated.

On the other side, activists against Keystone are mobilizing as well.

The climate grassroots group 350.org, who has led past petitions and rallies against the pipeline, will once again take to the streets of Washington the Sunday before Presidents Day. The group and its supporters will partner with the Sierra Club and the Hip Hop Caucus on Feb. 17 for Forward on Climate — what it hopes becomes “the largest climate rally in U.S. history” — to push Obama to reject Keystone.

A State Department decision on Keystone is not expected until March at the earliest.