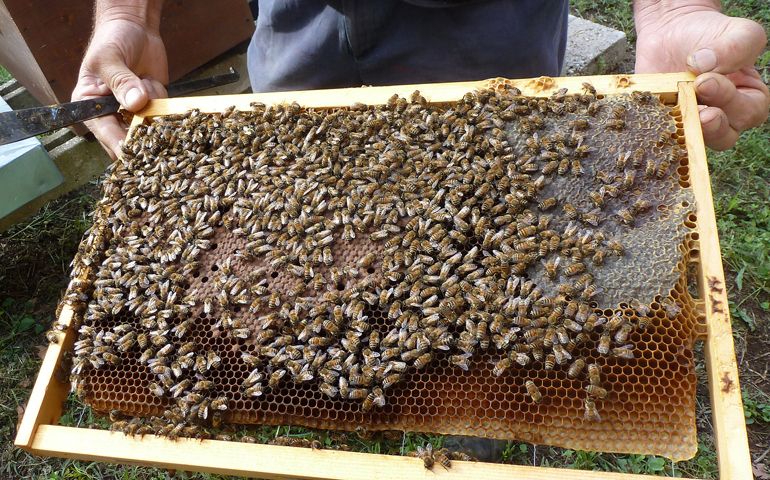 Papal beekeeper Marco Tullio Cicero shows off the honeycomb covered with worker bees making honey for the winter and Pope Francis Sept. 12 at the papal villa at Castel Gandolfo, outside Rome. (CNS/Carol Glatz)

The pontifical honey harvest has commenced, with Pope Francis soon to receive a jar of the honeybees' hard work. While these bees' productivity will determine how long the amber liquid remains on the papal breakfast menu, others could have even farther-reaching effects, such as determining the course of the U.S. food supply.

The papal villa farm in the town of Castel Gandolfo is a 50-acre home to dairy cows, chickens, olive groves, a vegetable garden, an orchard and beehives. Created in the 1930s by Pope Pius XI, the rural farm provides enough food for daily deliveries to the papal household as well as leftovers for the Vatican supermarket, according to Gourmet magazine.

The new director of agricultural operations at the farm, Vincenzo Scaccioni, has chosen to make beekeeping a priority. In 2011, Benedict XVI was given a gift of 500,000 bees, but they did not survive well because of extreme weather.

"Bees are a symbol of industriousness, unity and a community that gives fruit," Scaccioni recently told Catholic News Service. "It is an example that the church, deep down, is a hive, though not one that stings, but gives honey."

The Vatican farm is "precisely a sign of the pope's attention to creation, to nature, to the rural world. As it was in the beginning," Scaccioni said in a CNS video report.

In the beginning, God placed Adam in the garden to work it and care for it (Genesis 2:15). Yet the garden provided everything Adam needed, so what kind of work did he do exactly?

The Hebrew word, avodah, which has been translated as "to work" in the English-language Bible, actually has two other meanings: "to worship" and "to serve." The first time Adam worked the land was after he was expelled from Eden, so many Jewish scholars teach that God originally placed Adam in the garden so he could minister to it.

Today, the humble honeybee desperately needs ministering. Since 2006, the world has witnessed a disturbing phenomenon referred to as colony collapse disorder (CCD), where all the worker bees disappear from a hive, leaving their queen behind to starve.

Seven years ago, U.S. beekeepers began reporting average losses as much as a third of hives, and as large as 90 percent, according to a May National Geographic story.

The report stated that bees continue their struggle for survival, with colonies now weaker than ever. National Geographic cited data from the 2012-2013 winter, showing U.S. beekeepers lost, on average, 45.1 percent of hives in that time period, a continuation of an unprecedented pollinator crisis extending to Europe and parts of Asia.

What do vanishing bees have to do with avodah? Researchers and scientists from the University of Maryland and the U.S. Department of Agriculture recently claimed that CCD is due in part to farming practices. Their study found nine different pesticides and fungicides in pollen from seven major crop types that researchers fed to healthy bees in parts of the East Coast hit particularly hard hit by colony collapses.

Bees ingesting the chemically laced pollen were three times more likely to receive a parasite connected to colony collapse disorder, the researchers reported, and that most bees they sampled foraged not in crops but among weeds and wildflowers, leading them to believe the insects are far more exposed to pesticides.

Another study, out of Penn State, found that even the inactive ingredients of pesticides posed harm to bees, impairing their ability to learn, navigate and smell, "and thereby may contribute to disappearing honey bees that characterizes CCD and other bee decline syndromes."

While the European Union has proactively banned specific pesticides that are thought to cause CCD, the U.S. has not. If all the bees in the U.S. succumb to CCD, however, a third of the U.S. food supply could vanish.

About 100 different crops in the U.S. need bees for their survival, "including apples, nuts, all the favorite summer fruits (like blueberries and strawberries), alfalfa (which cows eat), and guar bean (used in all kinds of products)," National Geographic reported, adding that bees contribute as much as $15 billion to U.S. crop production.

Oftentimes, bees are seen as a nuisance, especially since their sting can severely injure or even kill, so it is hard to imagine such a small pest contributing so greatly to our society. Perhaps we can learn from the example of St. Francis (who is said to have fed half-frozen bees in the wintertime), and even from Scaccioni's tender care of the Vatican's smallest workers.

"We always need to have great respect for [bees'] work," Scaccioni told CNS. "Today we are reviving a vision that's more organic and in tune with nature. We are coming out of an era in which, sadly, many people believe in an approach using biocides.

"But today we know we must preserve this great cultural and zoological heritage of keeping bees, in a way that benefits plant life, and that benefits the surrounding environment."

The papal beekeeper, Marco Tullio Cicero, expressed great admiration for bees, telling CNS, "We need to value this lesson they teach us: always to press onward."

Hopefully, Francis' sweet gift from the papal bees will inspire memories of Eden and the avodah to which God is still calling us.