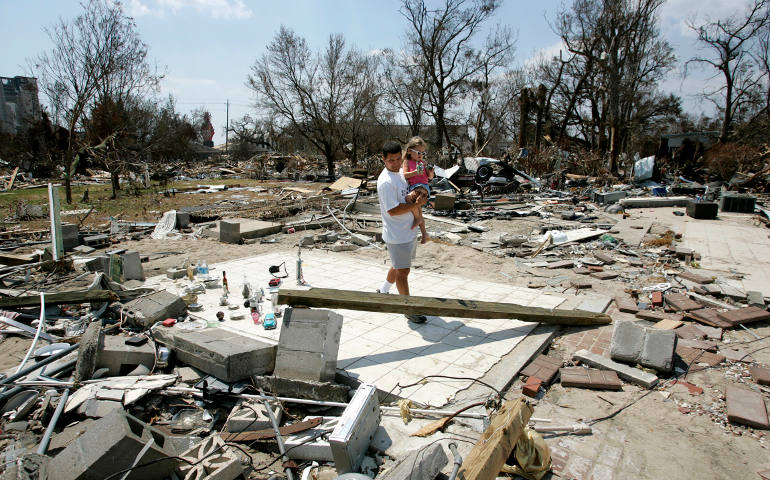 A father and daughter walk through rubble in September 2005 in Biloxi, Miss., after Hurricane Katrina devastated the Gulf Coast community. The hurricane and the failure of the New Orleans levees Aug. 29, 2005, caused more than 1,800 deaths across the coast and damaged or destroyed more than a million houses and businesses. (CNS photo/Bob Roller)

After evacuating for Hurricane Katrina, Malcolm Ware couldn't wait to get back to his apartment at the Santa Maria del Mar Retirement Community and the shrimp awaiting him in his deep freeze.

"Somebody had given me five pounds of shrimp, which I had put in the deep freeze the night before we left," he said. "I thought, 'Boy, I hope the power doesn't go off because, when I get back, I can eat my shrimp.'"

Unfortunately, the power went off, never to come on again and he never got the chance to enjoy his shrimp feast. But Ware, who is 82, survived Katrina and after nearly a decade away from his beloved Mississippi Gulf Coast, was able to return Biloxi and a new and, much improved Santa Maria, one of seven retirement communities sponsored by the Biloxi diocese.

He said two days before Hurricane Katrina made landfall, Franciscan Sr. Rebecca Rutkowski, director of Catholic Social and Community Services, came to the retirement home to warn residents that they needed to evacuate.

"But then she came back later in the day and told us to disregard everything she had said earlier because the hurricane was going over toward New Orleans," he said.

"Well, by late that evening, she came back again and called another meeting and told us to disregard everything that she'd said earlier because the hurricane was coming this way and we were going to have to leave. If we didn't leave, she said, we would be arrested and taken to a shelter."

Ware, a retired senior librarian at the Gulf Coast Research Laboratory in Ocean Springs, Miss., and another resident, Willis Cosby, a retired school teacher from Chicago, heeded Rutkowski's warning and headed to Hattiesburg where they joined about 500 other evacuees at a shelter. After a few days there they were told they couldn't return to assess damages so they again hit the road, this time toward Memphis where the two stayed with Ware's sister.

Every day, Ware, a widowed father of six, called the Santa Maria to get an idea of when they could return to their apartments. "The phone would ring and ring and nobody would answer," he said. "This went on for about two weeks."

Finally, he learned that the community had been condemned by the city of Biloxi and would not reopen in the same location. Ware and Cosby rented an apartment in Memphis briefly but they both wanted to return to the Gulf Coast, which they did in November.

Cosby died a month later, leading Ware to say he lost his good friend but he also was glad Cosby got to return to his home before dying.

After making several visits to the old Santa Maria to retrieve personal possessions, Ware returned to Memphis where he remained for the next nine years.

And then he heard that a new Santa Maria was being built.

In 2013, the new $26 million Santa Maria del Mar Retirement Community opened. The twin six-story towers house a total of 208 units, including 134 studio apartments and 74 one-bedroom apartments. At the time of the dedication, 29 residents of the old Santa Maria had passed away, including one who died while evacuating.

Ware said he's delighted to be back at his new home, where he is known for his kindness to fellow residents. Ware still drives and he often chauffeurs his neighbors to appointments or to pick up groceries. He's also known as "The Bird Man of Santa Maria del Mar" because he cares for the birds that live on the property.

His new apartment, just like his one at the old Santa Maria, is on the third floor. "Unless we have a super hurricane, I don't think the water will come up to the third floor," he said.

In fact, the new Santa Maria is a designated storm shelter. The buildings are reinforced with poured-in-place concrete designed to withstand winds of 150 mph, and the finished floor elevation is 27 feet above sea level.

If another hurricane threatens Biloxi, Ware can stay put.