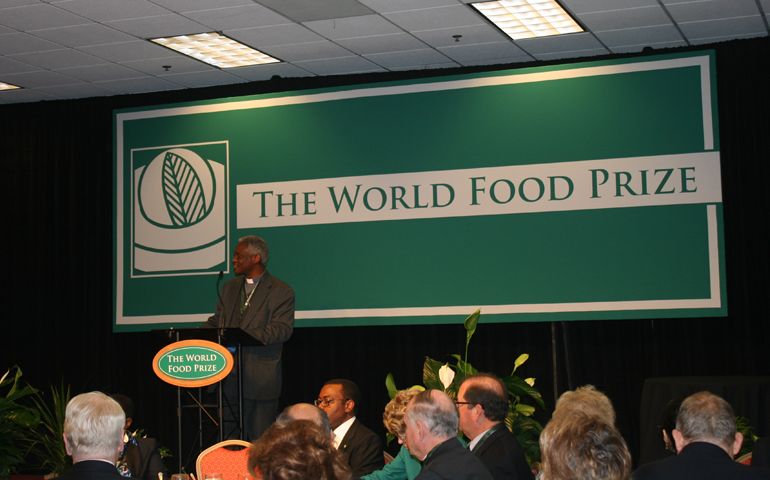 Des Moines, Iowa — Lunch at the World Food Prize conference featured salad with soybean-oil dressing, soy-fed chicken and soymilk parfait -- all the product of genetically modified seeds and sponsored by several soy industry groups. As Cardinal Peter Turkson took the stage to deliver his keynote speech, he warned his audience that his words might cause indigestion.

"It is hazardous -- and ultimately absurd, indeed sinful -- to employ biotechnology without the guidance of a deeply responsible ethic," Turkson told the group of international scientists, politicians, and religious and business leaders, including the three agribusiness pioneers who were being honored for winning the 2013 World Food Prize.

Turkson, undaunted by the mindset of his audience, used his 45-minute speech Oct. 17 to promote caution when it comes to using genetically modified organisms (GMOs). He backed the labeling of foods that have been produced with such methods, and he questioned the economic value of pushing GMO technology for small farmers, especially those from developing nations.

"It is not [farmers] who are missing the point. Whoever refuses to look at the whole food insecurity picture -- people and their dignity and their lives as well as food production and distribution -- will miss the point," he said.

Finally, he urged both sides of the issue -- of whether to use biotechnology to solve the world's hunger crisis -- to sit down and try to find a solution that works for all.

A record 1,500 people from more than 70 countries attended this year's World Food Prize conference in Des Moines Oct. 16-18. The event's mantra, via speeches, panels and press conferences, was the ability of biotechnology to "feed the 9 billion people expected to populate the world by 2050," particularly in underdeveloped regions of China, India and Africa. Turkson, the former archbishop of Cape Coast, Ghana, was invited to deliver a keynote address at the conference about the need for agricultural development in Africa.

As president of the Pontifical Council for Justice and Peace, Turkson has expressed concerns about the economic, environmental and social consequences of GMOs. In addition to his speech at the conference, the cardinal spoke at another Des Moines event, this one sponsored by a group of activists calling themselves Occupy the World Food Prize. That meeting, Oct. 16, drew a standing-room-only crowd to the First United Methodist Church of Des Moines.

"In the spirit of Pope Francis, Cardinal Turkson wants to create dialogue," Des Moines Bishop Richard Pates told NCR. "He's not interested in people lobbing insults back and forth."

While there, Turkson also agreed to meet with a small group of GMO opponents, many of whom were Iowa farmers inspired by the late Des Moines Bishop Maurice Dingman, a vocal advocate for family farms. When they challenged Turkson to denounce biotechnology during his address the next afternoon, the cardinal said that instead he would "liaison with the U.S. Conference of Catholic Bishops, the Vatican and the U.N." so that "big farmers can hear your anxieties, hear you speak from your hearts. We need to promote something like that."

"Think of tomorrow as a single day in this," Turkson told them. "Probably nothing radical will happen [at the keynote address]. But for me, it's the beginning of a process that will ultimately lead us to what we desire and expressed tonight."

The next day, about 10 minutes into his speech before the biotechnology crowd, Turkson brought up the debate between the two sides.

"When you juxtapose the World Food Prize and the Occupy World Food Prize, at first glance the divergence can appear and sound like polar opposition. The urgency of world hunger and food insecurity certainly cries out for 'rightful betterment,' and therefore calls for dialogue," he said.

"For the dialogue to progress in good faith, all the stakeholders must genuinely be represented and meaningfully take part," Turkson said.

He invoked the founder of the World Food Prize, Norman Borlaug, who won the Nobel Peace Prize in 1970 for creating wheat strains that kicked off the "green revolution" in developing countries. Borlaug wanted the food prize to honor people whose work "advanced human development by improving the quality, quantity or availability of food in the world," according to the World Food Prize Foundation.

Turkson congratulated this year's laureates "for carrying on the legacy of Dr. Borlaug, putting biotechnology and research towards improving food production."

But he went on to ask, "Why then is there so much displeasure and distrust today, so much skepticism and strong opposition [to GMOs]?"

"Never before, having accepted an invitation, have I received so much mail," the cardinal said, "some of it urging me to withdraw ... much of it recounting destruction and suffering in relationship with globalized industrial agriculture promoting GMO crops."

Citing a U.N. statement that nearly one-third of all the world's food is wasted every year, Turkson said, "In large part, hunger is a problem of distribution of food or access to it."

He added, as servers carried away the leftovers from lunch, "To others, however, food comes in abundance, even from afar -- abundant enough that they can waste it."

At this point, people in the audience had begun to shift in their seats, mumbling and glancing at one another or at the floor.

"New technologies are promoted with the claim of making more food available for everyone. But that is not the whole picture," Turkson said. "In reality, the innovations are so designed or implemented as to benefit relatively few interests that are already well-off."

At a press conference Oct. 16, the three laureates defended their work on GMOs, saying biotechnology was necessary to end world hunger.

"This is the safest food ever produced by man," Fraley said. "We need to push hard and communicate and make sure people understand these technologies have been thoroughly tested and their safety has never, ever been compromised."

"The reason this technologically has been adopted by farmers is because it works," he said. "The idea that someone is going to buy products that don't work is sheer nuts."

"In many countries, especially in Europe, the reaction against GMOs is so strong that people don't get grants anymore to do even fundamental science," Van Montagu said.

The European Union recently adopted mandatory GMO labeling for food security. The United States labels organic food products, and there is a debate about whether to label GMO products.

"I think it would be the death of [bio]technology if there was an obligatory label," Dell-Chilton said at the press conference.

Turkson called for universal labeling of food products, saying the effects biotechnology has on human and environmental health "may only emerge with time." He recommended "taking every reasonable measure of caution" with GMOs, even if that meant government intervention.

He also pushed for GMO patent regulation, even though he said he sympathizes with the cost of research. However, seed patents allow companies such as Monsanto and Syngenta to sue farmers who save and reuse their seeds, and Turkson said that without regulation "whole populations can be discriminated against, exploited and deprived of what they rightly should have a share in."

He spoke of African palaver, a method of decision-making through consensus. In order for palaver to work, however, "all the stakeholders must be represented around the palaver circle," he said.

"The world needs everyone, the heirs of Bishop Maurice Dingman and the heirs of Dr. Norman Borlaug, to stay at the table and solve these issues, rather than abandon the dialogue and leave the world's poor at an empty table."