Skip to main content
EarthBeat
This story appears in the Francis in the United States feature series. View the full series. 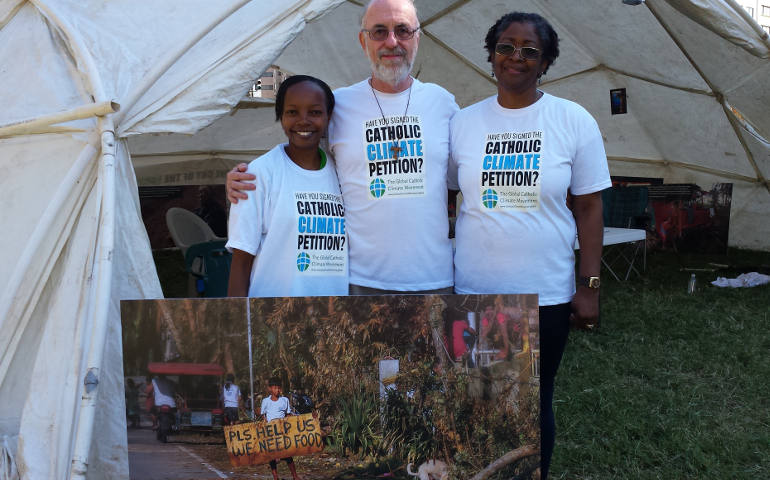 Just blocks here from the U.S. Capitol and the White House, the Global Catholic Climate Movement, Franciscan Action Network and others are on day four of a 10-day fast for action to keep global warming below 1.5 degree Celsius. The fast will end with the beginning of a Day of Atonement celebration and overnight vigil that will culminate with Pope Francis’ address to Congress on Sept. 24.

On Monday morning, white-shell tents made out of PVC pipes and plastic sheets were constructed at the corner of K & 15th Street, in McPherson Square. Shortly after, Patrick Carolan, executive director of Franciscan Action Network, and I began our water-only fast.

Later that evening, Scott Wright, director of the U.S.-based Columban Justice and Peace Office and Sylvia Washington of the Illinois Environmental Protection Agency joined us. So did 18 members of Beyond Extreme Energy holding a larger water-only fast farther down K Street in front of the Federal Energy Regulatory Commission.

The Sisters of Charity and Sisters of Mercy then led us all in a moving joint ecumenical service. Our combined group started with singing a version of St. Francis of Assisi’s “Canticle of the Sun.”

Marianne Comfort of the Mercy sisters’ Institute Justice team quoted Francis’ encyclical “Laudato Si’, on Care for Our Common Home,” in saying that Christians are called to “an ‘ecological conversion,’ whereby the effects of their encounter with Jesus Christ become evident in their relationship with the world around them. Living our vocation to be protectors of God’s handiwork is essential to a life of virtue; it is not an optional or a secondary aspect of our Christian experience.”

The service proceeded with additional reflections from Laudato Si’, and people shared why each joined the fast or supported its efforts. A Catholic Worker representative noted the relationship between war, poverty and climate change. Many spoke of their children or grandchildren, and younger participants spoke of nieces, nephews and unborn generations “who will come into this world and have to live with the way we have left it."

I shared that I was participating for the many unable to be here: my kids in school, my husband caring for them, other moms, those working, those with small businesses or working long hours and multiple jobs, those caring for others and unable to get away, as well as those already facing the impacts of climate change.

Hindus who had seen the impacts of climate change in India and Puerto Rico joined the group fasting in solidarity with those already suffering, whether from droughts, floods or fires in the U.S. Priya Parrotta described the importance of the ocean to her and all people living along coasts or on islands. The water is coming farther up the beaches, she said, threatening what is home.

Only if we realize the home of others is our home will we begin to have enough compassion to change our ways and to follow the pope’s charge to get off fossil fuels “without delay.” Like cleaning up after yourself, someone chimed in.

Steve Norris, a FERC faster from North Carolina, shared that the group had tried to get the commission’s attention in every way they could before turning to their 18-day fast. Their fast began Sept. 8 and continues until Sept. 25.

“We can’t continue talking about the climate and melting ice caps in the morning, and pushing fossil fuel leases in the afternoon,” said Maryland resident Steve Glick, one of the Beyond Extreme Energy organizers.

On Tuesday morning, I participated in a demonstration in front of the White House to keep fossil fuels in the ground, and later joined the final leg of the National Association for the Advancement of Colored People’s march from Selma to Washington D.C., crossing the bridge connecting Virginia to Maryland as we made our way to the Lincoln Memorial.

Wednesday brought morning Mass at the Franciscan Monastery of the Holy Land. Afterward, Patrick and Sylvia headed to Capitol Hill to distribute copies of Laudato Si’ to Catholic members of Congress, while the rest of us returned to the tent. Stephane Ruoult, a Parisian who recently relocated to Maryland, joined me in hanging the stained glass artwork he and his wife Heidi created. The stained glass windows, along with colorful photos from Greenpeace featuring quotes from the encyclical, now hang around the rough tent.

Occasionally, people -- whether homeless or professionals -- drop by and ask what we are up to. Anne Kirori, a leader of the Catholic Youth Network for Environmental Sustainability in Africa has also joined us. On Friday, I planned to join the Beyond Extreme Energy fasters at FERC headquarters to participate in their action at the commission’s quarterly meetings. Though they are not all Catholic, their action is structured around the Pope’s visit and Laudato Si’.

What brought Stephane to the fast, he said, was an energy project her his home close to the Chesapeake.

“The developers were emphasizing the economic benefits, jobs, and all, while the cons were low benefits to the local people and high ecological impacts of the natural gas plants. The choice was economic growth or the environment,” he said.

“Even in Laudato Si’,” Ruoult said, “the pope shows all the aspects of degradation of the environment, but it is hard to see what to do about it. But it is obvious that we as a Christian community are required to do what we can, where we are, often locally. … We can’t act as if we are isolated in our own little bubble. In France they say all the time, one cannot be a Christian on your own.”

[Marie Venner is chair of the National Academies’ Transportation Research Board subcommittee on Climate Change, Energy, and Sustainability and former co-chair of the Risk and Resilience Planning and Analysis subcommittee. She is also a member of the Global Catholic Climate Movement.]