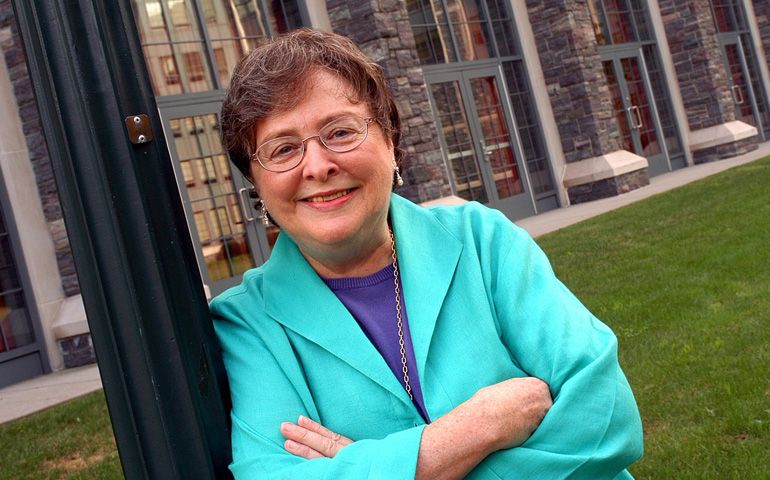 While it may come as a shock, humans are neither central nor supreme in the grand scheme of creation. Humans have a place among other beloved creatures of the same living God, and it’s more humble kinship than dominion.

On Friday evening, St. Joseph Sr. Elizabeth Johnson, distinguished professor of theology at Fordham University, shared thoughts on the idea of such kinship with nature and described new ways to understand how humans fit into God’s work of creation during a well-attended talk at Mary House, a Catholic Worker house in New York’s East Village.

The talk, titled “Creation: Where Do People Fit?”, was part of a regular Friday evening meeting series held at Mary House.

The natural world and its creatures are in crisis as a result of consumerism and greed, as well as their diminished place in contemporary religious imagination, Johnson said. The remedy is a 180-degree conversion to the earth by focusing on God who loves the earth.

Johnson said that Pope Francis’ encyclical “Laudato Si’, on Care for Our Common Home” offers a religious vision of environmental coexistence that is different from the traditional picture. It calls for a new way of being human that will enhance and not diminish those with whom the planet is shared.

As a theological extension of the option for the poor, Johnson said nature becomes the new poor and “our love of a neighbor needs to extend to include the poor natural world diminished by an elite group of humans.”

Johnson said the longtime Catholic understanding of creation was of a pyramid with humans at the pinnacle and all other creatures as a neutral backdrop. “There’s a hierarchy and we’re on top and others are meant for our use,” she explained.

“I find it daunting to realize how deeply this sense of human beings as the rulers of nature has shaped Christian belief and practice and has largely erased creation from the faith experience,” she said.

Johnson said the theory developed from ancient Greek philosophy that valued spirit over matter, leaving rocks and plants farthest from the divine and angels the closest.

In Laudato Si’, Francis points out that Jesus Christ rejected such a notion of hierarchy:

Yet it would also be mistaken to view other living beings as mere objects subjected to arbitrary human domination. When nature is viewed sole­ly as a source of profit and gain, this has serious consequences for society. This vision of “might is right” has engendered immense inequality, injus­tice and acts of violence against the majority of humanity, since resources end up in the hands of the first comer or the most powerful: the winner takes all. Completely at odds with this model are the ideals of harmony, justice, fraternity and peace as proposed by Jesus. As he said of the powers of his own age: “You know that the rulers of the Gentiles lord it over them, and their great men exercise authority over them. It shall not be so among you; but whoever would be great among you must be your servant” (Mt 20:25-26). [Laudato Si’, Paragraph 82]

An alternative to the pyramid of privilege metaphor is the circle of life that embraces evolution and a biological history shared among all creatures on the planet, Johnson said.

Francis is contributing something new to the long-running discussion by emphasizing the community of creation. There is no justification for domination over other creatures, because they also have intrinsic value and share in the love of God.

Moreover, mistreatment of nature and creation is profoundly sinful, and contradicts the will of the creator that the world should flourish, Johnson said.

The conversion to the earth includes intellectual, emotional, ethical and spiritual components. Intellectually, the shift away from a human-centered view of life will honor the presence of God “in, with and under the ecological community of all species,” Johnson said.

Emotionally, there is a need to turn away from the delusion of the separate human self and isolated human species to a felt kinship and affiliation with all creatures. If the effort is successful, Johnson said images such as “Brother Son, Sister Moon” -- central characters in St. Francis of Assisi’s “Canticle of the Creatures” -- become felt truths and not poetry.

Ethically, conversion requires society to “relate to the earth with respect, not rapaciousness,” she said. “A moral universe limited to the human person is no longer adequate. Attention must re-center on the whole communion of life.”

“Being converted leads us to weave the natural world back into our religious imagination with prayer, art, music, justice and charity. Our challenge is to develop a spirituality that makes loving the earth and its creatures an intrinsic part of faith in God, rather than an add-on,” Johnson said.

She continued: “Ecological conversion is falling in love with the earth as an inherently valuable living community in which we participate, and bending every effort to be faithful to its creative well-being because we love God who loves the earth unconditionally.”

“We’re not talking simply about a moral mandate. This is a call to a deeper relationship with God that transforms us to a greater-heartedness in resonance with the love who made and empowers us all,” Johnson said.

“How could God create the whole world and let only one species make it through death?” she concluded.

[Beth Griffin is a freelance journalist based in New York.]