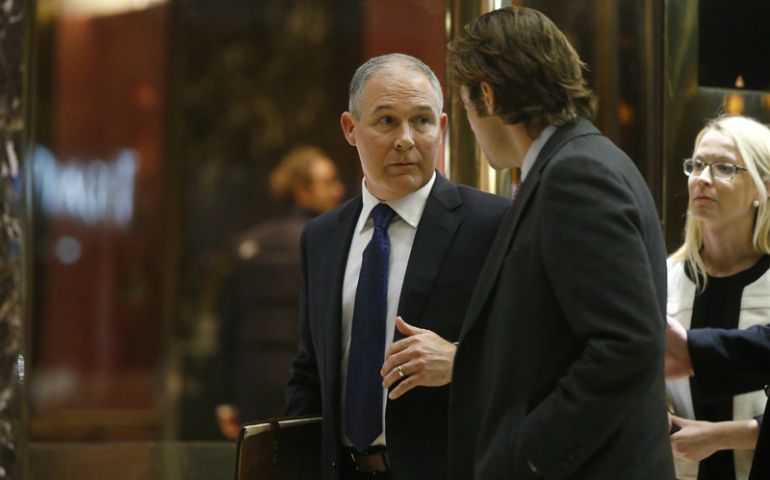 Pruitt, who is Oklahoma's attorney general, is a climate-change denier. In the National Review last May, he and co-author Luther Strange wrote, "Scientists continue to disagree about the degree and extent of global warming and its connection to the actions of mankind."

The vast majority of scientists do not disagree that global warming is linked to mankind's use of fossil fuels. Pruitt heads a coalition of Republican state attorneys general who are suing the EPA and the Obama administration over its climate change initiatives.

The appointment, announced Dec. 7, has environmentalists in full alarm mode.

"Mr. Pruitt has been a consistent critic of regulations that require industries to account for the costs they impose on the environment, often justifying his position based on flawed science," David Levine, head of the American Sustainable Business Council, said in a statement. "Climate scientists nearly unanimously find the opposite is true. Mr. Pruitt’s selection signals a roll back of policies that have stimulated innovation and progress.”

Michael Brune, executive director of the Sierra Club, was more blunt. “Having Scott Pruitt in charge of the U.S. Environmental Protection Agency is like putting an arsonist in charge of fighting fires," he said in a statement. "He is a climate science denier who, as Attorney General for the state of Oklahoma, regularly conspired with the fossil fuel industry to attack EPA protections."

Pruitt's pick intensifies concern among science and education professionals about the impact Trump's Cabinet picks — many of them evangelical Christians — could have on the environment, the advancement of science and teaching standards.

Vice President-elect Mike Pence and Dr. Ben Carson, Trump's pick to head the Department of Housing and Urban Development, are both evangelical Christians and known creationists who adhere to the biblically supported belief that the Earth is only 6,000 years old.

Pruitt is also an evangelical Christian — he serves as a deacon at First Baptist Church in Broken Arrow, Okla., and graduated from Georgetown College, an evangelical school. He has a record of opposing marriage equality, transgender bathroom access and abortion, and opposed a church-state separation ballot initiative on the Oklahoma ballot earlier this year.

Pruitt was also the subject of a 2014 New York Times investigation of a "secretive alliance" between Republican attorneys general and the oil industry.

Writing in Scientific American, Devin Powell quotes science education advocates warning that "the legitimization of such nonscientific views at the highest levels of government could trickle down to local policies."

He writes that battles over how evolution and climate change should be taught are already being fought in states such as Louisiana and Texas, where there are bills in the state legislatures that would let teachers treat the subjects as controversial.

"Nearly all of this legislation has emerged in states that were won by Trump," he wrote.

Also of concern is the appointment of Betsy DeVos, another evangelical, to head the Department of Education. DeVos is a champion of school vouchers, a program to send public money to religious or private schools. She and her husband, Dick DeVos, have framed their support for vouchers in terms of "advance(ing) God's kingdom."

As a candidate for governor of Indiana, Dick DeVos supported the teaching of "intelligent design," a religion-based theory that the universe is so complex it must have had an intelligent creator. Intelligent design and creationism garner almost no support from mainstream scientists.

“These kinds of initiatives motivate the educational community,” Brown told Scientific American. “If messages like that are not coming from the top, I wonder whether there will be a shift in priorities.”

Candidate Trump indicated he would like to see that shift. He repeatedly pledged to end the Common Core State Standards, a set of learning goals for students from kindergarten through 12th grade. Though the Obama administration has supported Common Core, it is states, not the federal government, that decide to adopt them.