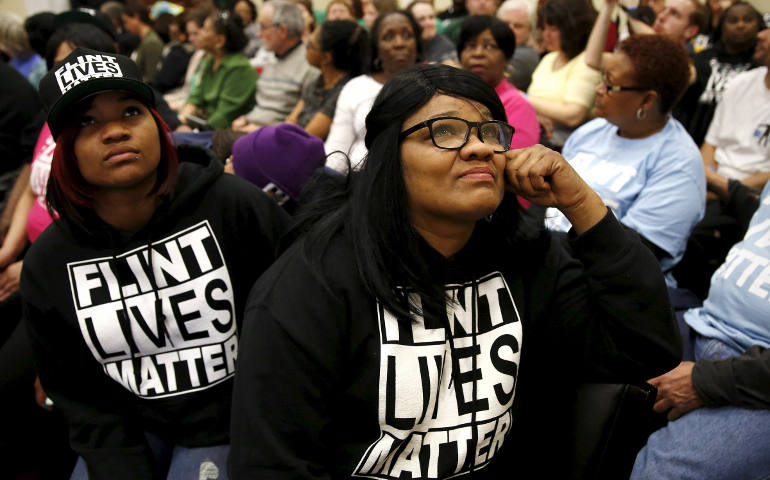 Imagine turning on the tap in the morning and seeing something that's "looked like toilet water coming out of your faucet," in the words of one Catholic leader. That's been the reality facing tens of thousands of residents of Flint, Mich., every day for more than a year.

Now, imagine looking for safe, potable water and getting arrested for your trouble. That, too, is the reality -- and the fear -- for immigrants living in Flint without legal permission.

Deacon Omar Odette, pastoral administrator of Our Lady of Guadalupe Parish in Flint, said he knows members of his parish who have been arrested for not having immigration documents.

"They're picked up, hauled away, given a court date. That's really a big issue. It's not a minor issue, it's a major issue," he said. "The Border Patrol is only an hour and 10 minutes away from Flint" in Port Huron, which is separated from Canada by the St. Clair River, "and they come through quite a lot looking for people."

Odette was part of a delegation from the PICO Neighborhood Network and Michigan Faith in Action that flew Wednesday from Flint to Washington by way of Chicago to attend the House hearing on Thursday on the ongoing Flint water crisis with Michigan Gov. Rick Snyder and Environmental Protection Agency Administrator Gina McCarthy.

While in Washington, Odette and Faith in Action delegates also met with representatives of the Catholic Campaign for Human Development, the U.S. bishops' domestic anti-poverty arm, to update the situation in Flint, "how distribution is going and what they need still," Odette said. "Looking long-term down the road. It's not going to be the rest of this year (to rid the water system of lead), it's going to be two, three years. ... adapting to whatever people need. They're really dying to get that across to the people," he explained.

Our Lady of Guadalupe became a water distribution center out of necessity. "Because a lot of our people aren't documented, it was the straw that broke the camel's back. They weren't giving people water because they didn't have driver's licenses," Odette told CNS. "That's how we got into distributing water -- our people were getting denied. I don't know how many Hispanic communities came by to give us water, but there were semi-loads."

He recounted the story of a 6-year-old Chicago boy who wanted to help and his pastor told him, "Think about it." The lad thought, and he brought 88 cases of water from the Windy City. "It's amazing to think a 6-year-old boy could think like that," Odette said.

Majority-black parishes in southwestern Michigan brought both U-Hauls full of bottled water "and the people to unload it. Working with our people, it looked like they were here their whole lives," he remarked.

"We still distribute five days a week. We go from 9 to 6," Odette said. "Every day we're learning something new in how to do this. They didn't teach this in the seminary."

Odette, who is retired, took on the Our Lady of Guadalupe assignment because the diocese of Lansing, Mich., is short on Spanish-speaking priests. While the deacon is not a native Spanish speaker, his wife is. "She takes very seriously what they say about wives being the biggest helpers of deacons," he said.

Our Lady of Guadalupe got involved in PICO "when the water crisis started," Odette said. "One of the organizers contacted my parish and wanted to explain what PICO was about. I liked the idea. We needed help. I really knew we needed help citywide, and especially the Catholic community. They've been a tremendous help. They've put in a lot of effort."

Two years ago, city managers decided to switch the city of Flint's water source from Detroit's supply to the Flint River to save money. The city has been since reconnected to the Detroit water supply but during the time residents were using river water, the corrosive water ate away at old lead-lined service pipes that connect to residents' homes, ruining pipes and giving them lead-contaminated water.

When the crisis started making headlines, "people in Flint weren't just going to lay down and be nonresponsive," Odette noted. "There really hasn't been a good plan yet. They're started replacing some of the piping, but they do one a day. They call it 'fast-laning,' but when you have 30,000-some houses, it's going to take a long while if you do it one a day."

It may require replacing "things in the house that are bad" because of lead contamination, Odette said. One reason for the trip to Washington, he added, was to "let all facets of the government know that Flint's going to need money -- lots and lots of money -- unless you want to keep on poisoning 100,000 people."