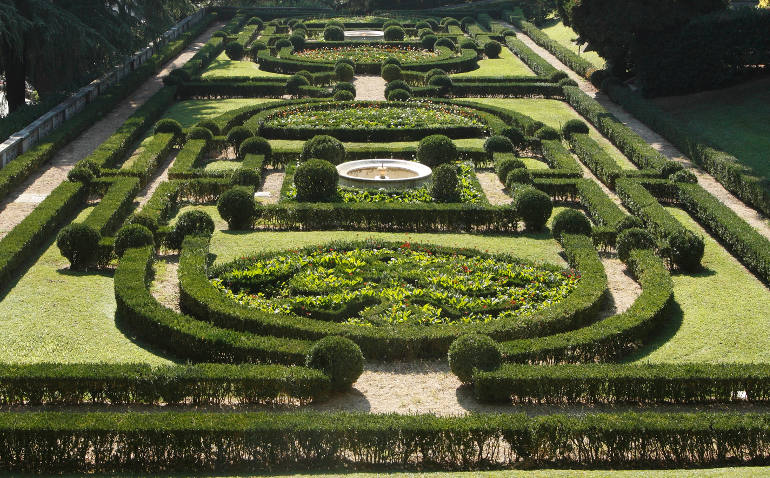 A section of the Vatican Gardens is pictured in this Sept. 15, 2011, file photo. The Vatican Gardens have evolved over the centuries from wild fields and vineyards to formal manicured plots. (CNS photo/Paul Haring)

The wild, unpopulated landscape on the fringes of early Rome slowly shifted as it changed to accommodate historical events over the course of 2,000 years: the martyrdom and burial of St. Peter; the blossoming of Christianity; the growth of papal power; and the eventual establishment of the world's smallest sovereign nation.

The gardens make up almost half of Vatican City State's 109 acres and their colorful evolution is documented in a newly updated volume: A Guide to the Vatican Gardens: History, Art, Nature, curated by historians and experts from the Vatican Library and Vatican Museums. Illustrated with full-color photographs and historic black and white engravings, the book has been translated into English.

In the first century AD, the Roman Emperor Caligula set up a circus for chariot racing near a villa his mother, Agrippina, had built in the area, which was still far on the outskirts of ancient Rome. Shipping over a red granite obelisk from Egypt, he decorated the circus with the monument, which now stands in the center of St. Peter's Square.

Emperor Nero expanded the circus, using it to showcase his cruelty against Christians like burning them alive to light his evening parties on the hill's gardens and crucifying others, like St. Peter, who was then buried in a roadside cemetery nearby.

As the apostle's tomb became a place of worship, the "circus fell into disrepair, Agrippina's villa decayed and the uninhabited hill returned to wild scrub," wrote the book's co-author, Ambrogio Piazzoni, vice prefect of the Vatican Library.

After Emperor Constantine converted and granted Christians the freedom to practice their faith, he ordered the construction of the first basilica dedicated to St. Peter, which meant razing part of the hill and covering over part of the cemetery.

A few small buildings were constructed nearby over the next four centuries including a monastery, but the popes -- the successors of Peter -- didn't start living in this "rustic and unprotected location" by the basilica until the fifth century, Piazzoni wrote.

With the Saracen Raid in 846, Pope Leo IV constructed a fortressed wall to defend the Vatican area from marauders. Inside the walls, there were meadows, vegetable gardens, orchards and vineyards while outside -- which is part of today's gardens -- were more pastures and woods.

Once popes started residing permanently at the Vatican, they added their own personal touches to the vast expanse of greenery surrounding them.

Pope Nicholas IV had his doctor, Simon of Genoa, cultivate medicinal plants and aromatic herbs in the tradition of the Benedictine monks, who were known for creating treatments for illnesses and distilled liqueurs and tinctures.

This 13th-century papal initiative was to become the oldest botanical garden in Italy and marked the beginning of the formal scientific study of botany as a branch of medicine, "predating by centuries the teaching of botany" in academies and universities, Piazzoni wrote.

Pope Pius V made sure the medicinal plant studies continued in the 16th-century by hiring a Tuscan botanist and geologist to take care of the gardens. The pope gave him the title of "medicinal plant expert of Our Lord" and furnished him with a "safe conduct pass" allowing him to travel anywhere in search of rare plants.

The Vatican medicinal garden gradually lost importance -- becoming a humble lawn -- after Pope Alexander VII built a newer and larger botanical garden, which is still one of the largest in Italy, along the Janiculum hill in 1660. The Vatican lost that and many other properties after the loss of the Papal States in 1870.

Given the variety of habitat and papal proclivities at the time, the Vatican Gardens were also home to a menagerie of wild animals including the brief upkeep of a leopard during the pontificate of Boniface VIII in the 13th century and Hanno, the elephant, which was a gift to Pope Leo X from Portugal's king in 1514.

Pope Pius XII found an injured finch in the Vatican Gardens and nursed her back to health. "Gretchen," the finch, would keep the pope company and sit on his shoulder at mealtime while hopping down to peck at crumbs.

Today, green parrots nesting in palm trees and a small sampling of cats are the only free-range fauna easily sighted in the Vatican Gardens.

The gardens went largely unchanged from its Renaissance heyday at the end of the 1500s to the end of the 1900s, primarily, Piazzoni wrote, because the popes had moved their main residence to the Quirinale Palace -- judging it to be "more comfortable, functional and situated in a sunny and healthy place."

Despite the disuse, the gardens were still cared for and embellished with additional fountains, shrines, statues and exotic or rare plant life.

With the end of the Papal States, the pope moved back to the papal residence at the Vatican.

Being largely confined to the small property, Pope Leo XIII spent a lot of time caring for the gardens and pursuing his love for hunting and viniculture. He reportedly tended his small vineyard himself, hoeing out the weeds, and visiting often for moments of prayer and writing poetry. He had a papal guard on duty with orders to shoot to scare off birds threatening his grape harvest.

Modern-day popes still use the gardens for exercise, restful relaxation and meditation. Retired Pope Benedict XVI takes his daily walk there, praying the rosary along the wooded paths.

Not just for popes anymore, the gardens were opened to the public several years ago as part of an organized tour either on foot or on an environmentally friendly open bus.

The tours highlight the gardens' blend of art, nature and faith, but also help visitors sense what the book describes as the harmonious co-existence of so many species of flora and fauna, which "reinforce the ideals that constitute the universal mission of this extraordinary place" -- the love and care for God's creation.