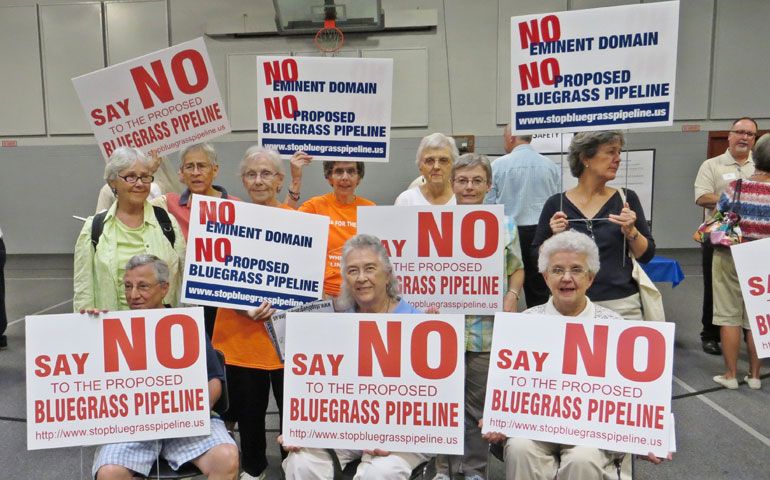 Rooted in the mission of the Sisters of Loretto of Marion County, Ky., is a commitment to care for the environment. Through conservation projects such as the Loretto Earth Network and the Loretto Land Ethic, members of this community teach and lead others to take action to protect natural resources.

This commitment is shaping a response to their latest challenge, a proposed pipeline through the land on which the community has lived and worked for 200 years.

The Williams Corp. of Tulsa, Okla., in partnership with the Boardwalk Pipeline Partners of Houston, has proposed construction of an interstate pipeline from two separate natural gas shales in western Pennsylvania and southeast Ohio through Kentucky. If built, the pipeline would transport natural gas liquids such as ethane, butane and propane from a developing natural gas exploration market in the northeast United States to an export complex on the Gulf Coast. From there, the natural gas liquids, often called NGL, would be shipped overseas for use in the construction of plastics, synthetics and rubber.

The Loretto sisters are joining with other groups and landowners in a grassroots movement to stop construction of the proposed line through what they call the "Holy Land" of Kentucky. When Williams approached them about access to their land, the sisters said no.

"We have all talked about how within this community we have a perspective that views all land as part of a sacred trust that is given to us by God," said Sr. Kathy Wright, treasurer of the community. "We are asked to care for it as stewards, to pass it on to the next generation of people in as good of shape or better shape knowing it is a resource that God intended for use over a long period of time."

Opponents of the pipeline in Kentucky are focusing their battle on the question of regulation. State Sen. Jimmy Higdon of Lebanon has introduced a resolution asking that the state's Public Service Commission examine this issue and "determine what agencies have oversight responsibility, and, if there are gaps, take immediate action to fill those gaps."

But the commission says such action would not be legal.

"There is nothing in Kentucky statute that would grant the commission or the state siting board any authority over this project," Andrew Melnykovych, a spokesman for the commission, told NCR.

According to the Kentucky Resources Council -- an environmental advocacy group -- there are few clear regulations covering pipelines carrying natural gas liquids even though those used to transport natural gas are subject to layers of government oversight.

"A very legitimate concern is that no one is really minding the store when it comes to the routing and the siting of these pipelines," said Tom FitzGerald, environmental lawyer and director of the council. "There is no agency that has that gatekeeper function that says this is needed, this is no more than is needed and that it is being routed in a way that is minimizing the impacts on land, air and water resources and our people."

He said the routing of this pipeline would go through some of the most hydrological sensitive areas of Kentucky, including regions with karst terrains, in which some bedrock has dissolved, leaving sinkholes and other features that allow water to flow underground.

"Because of the potential for those catastrophic and non-catastrophic failures of this transportation system, I really don't think the pipeline is in the state's best interest," FitzGerald told NCR.

"The construction and operation of pipelines is extensively regulated by the U.S. Department of Transportation's Office of Pipeline Safety, which imposes a broad range of pipeline design, construction, operation and maintenance standards," said Tom Droege, a spokesman for the Williams Corp. "These standards address factors such as the quality of the steel used in the pipe, pipeline coating and cathodic protection, pipeline placement, welding, pressure testing and safety monitoring."

Williams and Boardwalk are in the planning phase of the project, "including permitting, public consultation and right-of-way acquisition," he said. Williams has identified preliminary routes for the new pipeline and is working on buying easements from landowners. The firm plans to have the pipeline in service by late 2015.

When asked about the concern from residents in Kentucky that Williams might pursue eminent domain in gaining access to land, Droege said that was "an absolute last option that we have rarely used."

It's concern for environmental safety that led the Loretto sisters to join with grassroots groups and local landowners, including the Trappist monks* at the Abbey of Gethsemani in Trappist, Ky., to try to stop construction of the pipeline. Both religious groups as well as other landowners have denied surveyors access to their land.

"This is a landowners issue and we are a landowner in this county along with lots of other folks," said Susan Classen, a co-member of the Loretto community. "It's been a wonderful opportunity for us to work together to care for the area."

More broadly, she said, work on this project is in line with the Loretto community's mission to protect the environment.

"It is our ever-growing love, concern and reverence for Earth that compels us to take action to reverse the destruction humans have wrought on the planet through ignorance, greed and wastefulness," Classen said.

FitzGerald welcomes the efforts of the sisters on this project.

"There is something very special about the Sisters of Loretto," he said. "I think the proponents of this project really underestimated the intelligence and the drive of people here if they thought they were just going to come and bulldoze their way through. These folks are very motivated and are really remarkable people."

*An earlier version of this story gave an incorrect order.