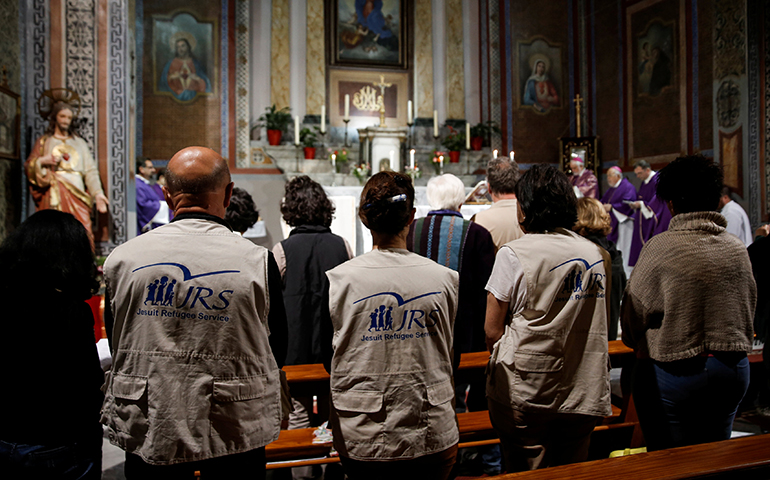 As representatives from the Society of Jesus gather in Rome from all over the world for their General Congregation, there is a relatively new ministry that they can be very proud of -- the Jesuit Refugee Service.

This program was initiated by Fr. Pedro Arrupe, the Jesuit superior general, who had seen the devastating impact of war on people in Japan where he cared for the victims of the atomic bomb in Hiroshima. The initiative was even more remarkable because it occurred at a time when the Jesuits were being forced to cut back because of declining numbers.

It was 1980 and the victims of war this time were refugees fleeing Vietnam.

"He didn't have any great ideas beyond walking with them to see what would happen," explains Jesuit Fr. Thomas Smolich, international director of Jesuit Refugee Service. "Being Jesuits, we can't just stop with walking with people, so we began very quickly to train people, to prepare people for their relocation, often times in English-speaking countries like the States, Canada or Australia."

Today Jesuit Refugee Service works in 45 countries serving 724,000 people, 55 percent of whom are Muslim. It has a staff of 1,800 people and a budget of about $50 million. It is quite small in comparison with Catholic Relief Services, Caritas International, Doctors without Borders, and the United Nations High Commissioner for Refugees, which also work with refugees.

Jesuit Refugee Service's motto is to accompany, serve, and advocate for and with refugees.

Jesuit Refugee Service is not usually involved in conflict situations, although it is present in Homs, Syria, where it runs a number of what the UNHCR calls Child Protection Programs. Functionally, they are schools for children who are not in school or in school only a couple of days a week.

Those working in the program are all Syrians, many of whom had actually left Homs and came back. "We want to protect our children," they explained to Smolich when he visited them in July. "We want to give these children a chance at whatever their future might be."

"We’re rarely the first group in some place," reports Smolich. Typically they are asked to help by the UNHCR, a local bishop, or some agency. Generally that is psychosocial work and education.

"Psychosocial care is basically accompanying people," he said. "It’s going to people's homes, learning what their stories are, listening to them, and at times bringing people together to share those stories. If it's a Catholic group, we might have an explicitly religious dimension to that coming together."

This helps the refugees deal with the trauma they have experienced so that they are better able to make the transition to the next stage of their lives. "We all do better if we’re able to talk to somebody about what has happened to us," he explains. "One never forgets these things, but the more you deal with it, the more chance of success there is to be wherever the next step is found."

This "accompanying" is a signature feature of Jesuit Refugee Service. "Even if we're giving away food, there's always an accompaniment piece of walking with people and learning about their lives," reports Smolich. Francis appears to like "accompaniment" and has chosen accompanying young people as the theme for the next Synod of Bishops in 2018.

Education is another major focus of JRS, which is involved with everything from preschool to university education.

"Sometimes we run the programs; sometimes we help governments run the programs," explains Smolich. "We train teachers, we provide scholarships to refugee students, and we help out in various ways." This includes schools, online university courses, and even vocational training for hair dressers, manicurists, carpenters, and other "basic things that can generate income."

Typically, Jesuit Refugee Service takes on what others are not doing. "In one large camp in northwest Kenya, there's another agency that has been doing the primary and secondary education for years and years, so we don’t do that," explains Smolich. Instead JRS got involved in special education.

"Nobody else was doing that so people said, 'We need somebody to care for these kids,'" explains Smolich. "So that’s what we do. In any one place we're probably not doing everything, but if you add it all together, somewhere we are doing all sorts of educational interventions."

As a Jesuit operation, it is not surprising that JRS emphasizes education. "We are doubling down on education because it's the thing we can contribute," explains Smolich. "We've got this tradition; it's got roots all over the world, frankly."

"We've been doing teacher training all over the place," because "the best way to impact an educational system is to train the teachers." Through the generosity of a large foundation, JRS is developing a global teacher-training program. It wants to train teachers not only with skills but values. "It's not just classroom management and knowledge," he said. It's about "accompanying" children. It about how you treat them.

Besides accompaniment and service, JRS is also involved in advocacy for refugees at the local, national and international level.

"Locally, we would be specifically working on particular cases," Smolich explains. "Here is somebody who has arrived, she's still being chased by people, there's a real lack of safety in this place. What can we do? Who can we connect her with? How can we get UNHCR to give her the protection that she needs?"

On the regional level, it is a question of how governments are handling refugees, for example Kenya with Somali refugees. "We’ve been working very closely with the bishops' conference of Kenya," explains Smolich. "What do we do as Catholics, as Christians, as people who take the lives of refugees seriously? What do we need to be saying at this point?"

Then there is global advocacy. "We do a lot with other groups," reports Smolich. "But I have to tell you, this is the mystery area right now: What does global advocacy look like in the digital age? I don’t think anybody has figured it out yet."

"It sure isn't tweeting," he says. "Tweeting is important, but that doesn't change hearts and minds; nor do 30-page position papers that you put on the Internet."

For example, what does global advocacy for Syria look like right now? "Nobody has an easy answer to that because there are no easy answers in Syria," he admits. "But what's the right thing to do and how do you get people to look at it?" Giving leaders position papers or doing petitions doesn't work. "Those are old. We're all wrestling with how does the voice of refugees, the voice of people suffering get heard in these bigger contexts? That’s the challenge right now."

Of the some 1,800 JRS employees, only about 65 are Jesuits. This requires a robust orientation program to keep the Jesuit character of the organization, especially since local employees reflect the religious character of the refugees.

"We serve everybody and we're not sectarian," explains Smolich. But "there are dimensions of Ignatian spirituality that makes sense to anybody who has some sort of value structure, has some sort of belief structure." Part of that is having a sense of discernment and accompaniment.

"This is all about what's your starting place," he explains. "Is it the rules or is it listening to somebody's story?" Is it some grand global socioeconomic theory? "No," responds Smolich, "JRS says you start with the 10-year-old who showed up on your doorstep and you listen to her and you talk to her mother and father and you just sort of build it up from that."

"It's also entering into dialogue with people of faith to see where that takes us," thinks Smolich. "Where does that take us in terms of being able to respect and incorporate that experience into where this refugee community goes and to how we serve them?"

During his first year as international director, Smolich met some of the extraordinary people helped by JRS. In Delhi, he met a refugee from Afghanistan who is now working on a master's degree in education. "She's from the Hazara tribe, which is looked down on by the ruling class," he said. "She's a remarkably intelligent young woman, wanting to make a difference in her home country and is on fire to do that."

Another refugee from the Congo is living in Nairobi in a two-room place with 13 children along with her sister. They are her family, her sister's family, and the family of another sister who had been killed. "She told me a little bit about her story, what had happened to her personally -- the violation, seeing family members killed in front of her eyes, her nephew being tortured. Somehow when she got to Nairobi, eventually she found JRS."

"We were able to connect her with somebody who gives scholarships to kids to go to school," said Smolich. “Even though the education is free, there are uniforms, books and fees, so there’s always something to pay.”

"This woman has been through more than any of us could ever imagine; a difficult life, more difficult than anything we could possibly imagine here in the States, and yet she has holiness and hope for these kids," he said. "There's not a whole bunch we can do, but by being present to her we do something." She asked him to pray for her. He responded, "Only if you pray for me too because you are far holier than I will ever be."

As the Jesuits in Rome reflect on the state of the Society of Jesus, a very bright spot will be the work of JRS in helping refugees all over the world. Sadly, it is a work that will not become irrelevant.