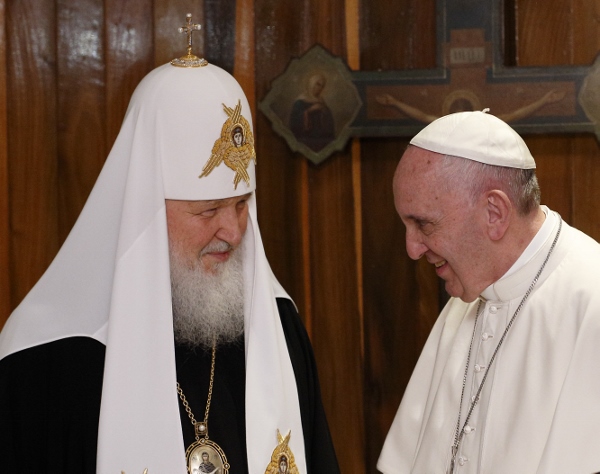 The meeting in Cuba between Pope Francis and Patriarch Kirill was supposed to be an ecumenical milestone, but it ended up causing anxiety among some Ukrainian and Polish observers.

The complaints were especially directed at the joint declaration between the patriarch and the pope. Most of the objections were to what the declaration did not say rather than to what it actually said.

For example, some said the Feb. 12 declaration should have included a condemnation of the Russian invasion of Ukraine, the Russian bombings in Syria, and the persecution of Ukrainian Catholics during the Soviet era.

I totally agree that all of these things are worthy of condemnation, but to think that the Vatican could get the patriarch to agree to them is totally naïve. Should any of these have been nonnegotiable demands from the Vatican? Absolutely not. If they had been, the meeting would never have taken place.

In ecumenical dialogues and in international negotiations, the Vatican is realistic not ideological. Vatican officials are willing to talk with anyone. Joint declarations are seen as ways of promoting agreements, not emphasizing differences. Meetings are seen as steps in a process, not as one-time solutions to every problem.

The declaration has also been condemned for describing the conflict in Ukraine as a civil war.

False. It does not describe the conflict as a civil war. What it actually says in paragraph 26 is:

We deplore the hostility in Ukraine that has already caused many victims, inflicted innumerable wounds on peaceful inhabitants and thrown society into a deep economic and humanitarian crisis. We invite all the parts involved in the conflict to prudence, to social solidarity and to action aimed at constructing peace. We invite our Churches in Ukraine to work towards social harmony, to refrain from taking part in the confrontation, and to not support any further development of the conflict.

Nothing in that paragraph shouts "civil war." The absence of the word "invasion" does not mean that the Vatican accepts Russia's description of the conflict as a civil war.

Many complainants have characterized the patriarch as a puppet of Vladimir Putin. There is no question that Kirill has strongly supported the Putin government. But when it comes to the war in Ukraine, the patriarch has been notably silent. In Putin's Russia, that amounts to bravery.

Kirill sees the war as pitting Orthodox faithful against each other, and therefore wants to stay above the fray. He also knows that to back Putin's invasion would alienate a large part of his flock that lives in Ukraine. While he has not condemned the war, he is no supporter of it either.

The patriarch has also been condemned as a supporter of Russia's intervention in Syria. Clearly, the patriarch is concerned about the situation of Orthodox Christians in Syria, who he fears will suffer if the Assad regime falls.

The Vatican also is concerned about Christians in Syria and is pragmatic enough to understand that a peaceful resolution of the conflict will have to involve the support of Russia. For both Syria and Iraq, the pope and the patriarch jointly "urge the international community to seek an end to the violence and terrorism and, at the same time, to contribute through dialogue to a swift return to civil peace."

There is no question that Putin supported the meeting of the patriarch and the pope, otherwise it would never have happened. Putin probably hopes it will distract people from his actions in Ukraine and promote Russia's role in Syria, but that was no reason for the Vatican to avoid the meeting. The Vatican has its own goals.

What did Pope Francis get out of the meeting?

First, it raised dialogue between the Catholic church and the largest Orthodox church to a new level. Every pope since Vatican II has desired such a meeting, but it has been the Russian patriarchs who have objected for one reason or other in the past. In the joint declaration, both parties say, "We are pained by the loss of unity," and speak of their "determination to undertake all that is necessary to overcome the historical divergences we have inherited."

After this meeting, it will be much easier to arrange future meetings. For the future of ecumenical relations between Catholics and Orthodox, this is very important.

Second, the situation of the Eastern or Greek Catholic churches was clarified.

These churches are in union with Rome but have married clergy and liturgies and traditions similar to the Orthodox. Prior to Vatican II, Rome saw these churches as a way of gradually winning over Orthodox believers to Rome. They are pejoratively referred to as "uniates" by the Orthodox.

In 1946 the Ukrainian Greek Catholic church was suppressed by the Soviet authorities and these Eastern Catholics were forced to join the Orthodox church. After Ukrainian independence, these churches again became free.

After Vatican II, the Catholic church recognized that unity with the Orthodox would come through dialogue, not through the conversion of individuals or communities of believers from the Orthodox to the Eastern Catholic churches. That is clearly affirmed in the joint declaration, which pleases the Orthodox. "It is today clear that the past method of 'uniatism,' understood as the union of one community to the other, separating it from its Church, is not the way to re-establish unity."

But equally important to the Vatican and to Greek Catholics is the acknowledgement by the patriarch of the right of these churches "to exist and to undertake all that is necessary to meet the spiritual needs of their faithful."

This statement is taken almost word for word from the 1993 Balamand Statement of the international dialogue, so it seems to represent a Russian Orthodox acceptance of the thrust of that text.

The two leaders expressed the "hope that our meeting may also contribute to reconciliation wherever tensions exist between Greek Catholics and Orthodox."

Finally, the joint statement laid out numerous ways that Orthodox and Catholics can work together for the good of humanity. This is good not just for these churches but for the world.

Three weeks after the meeting with Patriarch Kirill, Pope Francis met with members of the Ukrainian Catholic church's permanent synod. He listened to their complaints and acknowledged their history of suffering.

"We bow our heads in profound gratitude before those who, even at the price of tribulation and martyrdom, over the course of time testified to their faith, which was lived with dedication to their church and in unfailing union with the successor of Peter," the pope said in a message to Archbishop Sviatoslav Shevchuk, major archbishop of Kiev-Halych, head of the Ukrainian Catholic church.

Ukrainian Bishop Borys Gudziak of Paris told Catholic News Service that he and the bishops on the permanent synod also outlined for the pope the huge impact the Russian annexation of Crimea and the continued fighting in Eastern Ukraine have had on the country and its people.

In response, Pope Francis said, "I renew my solidarity with the pastors and the faithful for all they are doing in this difficult time, marked by the tribulation of war, to alleviate the suffering of the population and to seek paths of peace for the beloved land of Ukraine."

The Greek Catholics, because of their painful experience of persecution, are reluctant to trust Orthodox leaders who collaborated with Soviet authorities. Since the time of Paul VI, they have also feared that the Vatican would throw them under the bus in its eagerness to have better relations with the Orthodox.

Pope Francis made clear, according to one participant at the meeting, "that one cannot solve ecumenical problems at the expense of an entire Eastern Catholic Church." But neither is he going to focus on the past when there are opportunities to work for a better future.