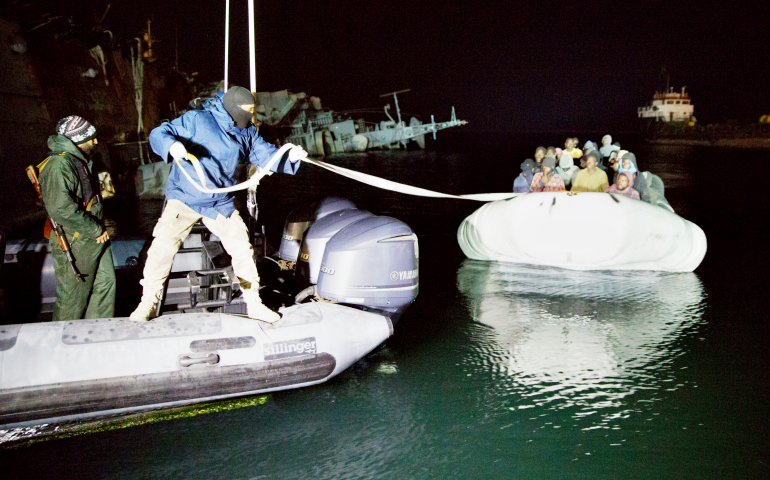 Jesuit Fr. Michael Czerny is undersecretary of the Section for Migrants and Refugees in the Vatican Dicastery for Promoting Integral Human Development. In other words, he is the pope's man on migrants and refugees. He was in Washington meeting with people at the U.S. Conference of Catholic Bishops when I interviewed him.

The dicastery, headed by Cardinal Peter Turkson, came into existence Jan. 1 and included the merger of four pontifical councils: for Justice and Peace, for Pastoral Care of Migrants and Itinerant People, for Pastoral Health Care Workers, and "Cor Unum."

The new dicastery (a Vatican word for department or office) has a large portfolio, including making the social teaching of the church more widely known; doing research on issues of justice, peace and the environment; and ensuring that local churches provide appropriate assistance to the sick, refugees, exiles, migrants, nomads and other itinerant populations.

The Section for Migrants and Refugees has an unusual structure, in that it has two undersecretaries and temporarily reports directly to the pope. Czerny's co-undersecretary is Scalabrini Fr. Fabio Baggio. Under them will be four regional coordinators for different parts of the world.

Sixty-eight years ago, Czerny was a refugee with his family from communist Czechoslovakia until they were welcomed by Canada, where he is now a citizen. Prior to becoming undersecretary, he was counselor to Turkson at the Council for Justice and Peace, where he worked on human rights and the 2015 encyclical "Laudato Si', on Care for Our Common Home."

The interview has been edited for clarity and length.

NCR: How do you at the Vatican deal with the huge migration and refugee crisis in the world today? What does your section do in response to that?

Czerny: The first thing we do is we say that it's not a crisis. Migration and even taking refuge have been part of human life since the beginning. We've always been moving. If we hadn't moved, we wouldn't be the human family that we are today. Moving is built into our genes; it's part of us.

Secondly, calling it a crisis puts it in the category of emergencies, which need a quick and not necessarily high-quality response. Whereas human mobility, and the fact that many people in the world today are forced to flee, needs a high-quality, steady response, not a sort of "anything will do" because it's an emergency.

Thirdly, and maybe most importantly, the decision to migrate is a very, very significant decision, a very difficult decision, and one that deserves the sympathy of everyone. It is a decision that "where I am, or where we as a family are right now, is nonviable. We can't stay here; we've got to go."

It's a choice that people make, I would say, very rationally. They make the right decision. If you put yourself in the shoes of a person who has been forced to flee, you will probably say, "I would have made the same decision, except I would have made it quicker. I would have fled sooner. I wouldn't have even waited that long or been that patient."

You don't like the word crisis, but still, how does your section respond to what's happening in terms of people moving around the world?

Since in the Catholic church there are about 3,000 dioceses, you could ask your question 3,000 times and piece together an answer, because each bishop, each diocese has a sometimes slightly different and sometimes a very different reality within its borders. What we hope for is that the church within those diocesan areas will find the means, the inspiration and the resources to meet what's happening in their borders.

The Roman Curia is there to help the Holy Father to exercise his mission. It's not a center of programs and activities.

What's the difference between what your section is doing today and what the Pontifical Council for the Pastoral Care of Migrants and Itinerant People did?

They had the word pastoral in their mission, in their title. Pastoral concern is a very real concern for us, but we are looking at migrants and refugees in a more complex way than only concern for, let's say, the chaplaincy.

Clearly, the pope is very concerned about migrants and refugees and, according to the statute that set up the dicastery, your section reports directly to the pope. Could you explain how that works?

Our section on migrants and refugees is hosted within the larger Dicastery for Promoting Integral Human Development. One day, we'll, hopefully smoothly, be fully integrated into it. We currently share the same facilities; we're part of the same budget — all of that. So, in one sense we are in the dicastery.

It's just that we don't report directly to Cardinal Turkson, who's the prefect, as all the other parts of the new department will. We report directly to the Holy Father. He is the person to whom we report; he's the one who guides our work. We seek to carry out his concern, his solidarity, you might say, his outreach in this huge area.

What direction has he given you? What has he told you that he wants your section to do?

I hope that what we're doing is my answer to your question. In other words, we're doing what he wants us to do. The single most important thing is what I've already told you, which is to work with the bishops. That motivated the decision to organize our work regionally and to understand that we are to help on a diocese-by-diocese and conference-by-conference basis. That is the essential implementation of his wish.

Migrants and refugees are clearly a major concern for him.

That's right. This issue was the first towards which he made a very public and indeed dramatic gesture by going to Lampedusa [an Italian island that is a point of arrival for many migrants]. Maybe our section is the answer to the question: Besides the symbolic gestures, the visits, the adopting a few families and bringing them back to the Vatican, what more could he actually do?

He remains the Roman pontiff, he remains the bishop of Rome; he can't actually do that many things himself, practically, but he can see to it that this mission of his is carried out, is implemented. That's why I think he has chosen to direct the section himself.

His stress is on the work of the dioceses and getting them involved.

When we say "getting the dioceses involved," it might suggest that they aren't involved. That's not at all the case. By being in touch with all the dioceses, we will get a much clearer and much richer picture of actually what's going on. As you know, the church is much better at doing things than at letting people know about them.

For example, earlier we used the word crisis. If under the word crisis you had two columns — one was "unmet needs" and the other was "initiatives and good practices" — by the time you finished filling out the page, you would say, "Yeah, in a way it's a crisis, but in a way, it's not a crisis." We're dealing with it, and we have been dealing with it for centuries.

In fact, the Scalabrinian Missionaries, the religious order of my co-undersecretary, Fr. Baggio, was founded in 1887 to care for migrants. Here is a religious order (and there are branches for both men and women) whose whole vocation is to minister to these people.

How do you get the story out about the needs of migrants and refugees and what the church is doing?

Right from the start, we've opted to begin with social media. So, whether it's using Twitter [@M_RSection] or Facebook or LinkedIn, every day we publish in four or five languages, a different story in each language.

Occasionally, they're something we've put together ourselves, but often it's something that we find. We're sending these out and people who are on our lists are receiving answers to your question every day from different parts of the world in the various languages. It is in itself already a good service. It's what I think we can do well — receive from everywhere and then share and put things into context and perspective.

You're not the first or only organization in the church to work on this, so what about the others?

Even as we speak, there is a forum on migration, which the Scalabrinis sponsor. This is the third or fourth such forum. On the day before the forum opened, there was a meeting of Catholic organizations involved in refugee and migrant work.

At this meeting, our new section introduced itself. Our hope is that we will be the base or the hub for a network among Catholic organizations. We will help to facilitate communication, but then also collaboration, division of labor, avoidance of overlap or competition, and more concerted efforts.

Caritas is a federation, so we're not federating and we're not the hub of a federation. We're just basically the home of a network. But given our location and our mission, I think it's cool that we can do this. I think it's logical that we should do it. It's gratifying that everybody, as far as I know, is very, very happy that there is someone on the block now who has the mandate to do that and to be a point of not so much of reference, but a good exchange point, a good crossroads for everyone.

Your section really is different from the Council for Pastoral Care of Migrants and Itinerant People because you're doing a comprehensive look at the situation.

That's right. You could say that our mission or our ambition is as vast as the phenomenon. If it's happening, then it's of concern to us; which is to say, if it's happening, it's of concern to the church. This is exactly what the church said of herself in the first sentence of Gaudium et Spes. If this is a human reality, then it's our reality. If people are suffering, it's our suffering. If people are getting on with it and rejoicing, it's our rejoicing.

We would like to help that mission of Gaudium et Spes be realized in every diocese and in every bishops' conference, because there is no local church that does not have people leaving, people passing through, people arriving or people returning to its territory.

What is your reaction to the immigration debate in the United States?

Archbishop Jose Gómez of Los Angeles and others have spoken about the importance of immigration reform in the United States. This is a long-term solution to many of today's problems.