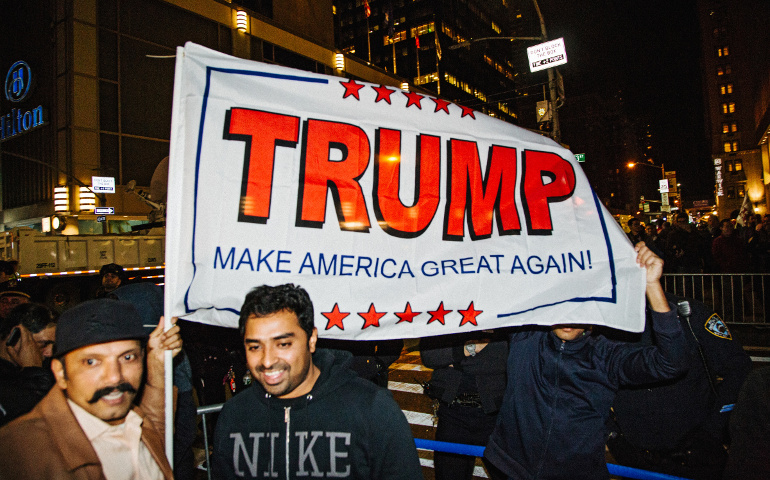 When talking to reporters writing on the Catholic Church, I normally avoid words like “extraordinary, unique, unprecedented, etc.” Pope Francis has sometimes forced me to use such words, and the latest editorial in La Civiltà Cattolica certainly deserves such a characterization.

“Evangelical fundamentalism and Catholic intregralism in the USA: A surprising ecumenism,” by Jesuit Fr. Antonio Spadaro and Presbyterian pastor Marcelo Figueroa is extraordinary.

The authors are known to be very close to Francis. Spadaro is the Jesuit editor of La Civiltà Cattolica who was granted the first blockbuster interview by the pope, and Figueroa is an Argentine Presbyterian pastor appointed by the pope to head the Argentine version of L’Osservatore Romano.

It is impossible to exaggerate the extraordinary character of this editorial. It is a full-throated attack on the political alliance between evangelical fundamentalists and Catholic neocons, which would not be surprising in NCR, but boggles the mind coming from a journal whose articles must be approved by the Vatican Secretariat of State before publication. True, La Civiltà Cattolica is not a Vatican publication, but is published by Jesuits. But the relationship between the publication and the Vatican is so close that Pope Pius XII used to make changes on the galleys.

The editorial does not mince words in condemning the “Manichaean language that divides reality between absolute Good and absolute Evil” and the “stigmatization of enemies who are often ‘demonized.’ ” It accuses fundamentalists of using scriptural texts out of context to give theological justification to belligerence as they prepare for “Armageddon, a final showdown between Good and Evil, between God and Satan.” These fundamentalists, say the authors, also falsely portray ecologists as people who are against the Christian faith.

Spadaro and Figueroa assert that the fundamentalists’ theocratic desire to submit the state to the Bible is impelled by “a logic that is no different from the one that inspires Islamic fundamentalism” and the “theopolitics spread by ISIS is based on the same cult of an apocalypse that needs to be brought about as soon as possible.”

The editorial also condemns the proponents of a “prosperity gospel,” that promises good things will come to God’s followers. The authors even take a brief swipe at an overemphasis on “religious freedom.” While acknowledging the erosion of religious liberty as a grave threat, they do not support “religion in total freedom,” perceived as a direct challenge to the secularity of the state.

But the main thrust of the article is an attack on the use of religion to sanctify the paradigm of war in American politics and in America’s role in the world.

“Both Evangelical and Catholic Integralists condemn traditional ecumenism and yet promote an ecumenism of conflict that unites them in the nostalgic dream of a theocratic type of state,” report the authors. “Xenophobic and Islamophobic visions that want walls and purifying deportations,” they say, exemplifies an “ecumenism of hate.”

“Religions cannot consider some people as sworn enemies nor others as eternal friends,” the authors explain. Nor should religion be used to protect the status of the dominant classes.

The language is so strong in places that you might have expected it from strict separationists. “Power needs to be removed from its faded confessional dress.”

Nor is nationalism or tribalism free of criticism. “The Christian roots of a people are never to be understood in an ethnic way,” write the authors. “… Triumphalist, arrogant and vindictive ethnicism is actually the opposite of Christianity.”

Besides the strong rhetoric of the editorial, it also is unusual in how it names names. The proponents and practitioners of this false Christian vision are singled out: Norman Vincent Peale, the writers at Church Militant, Steve Bannon, Ronald Reagan, George W. Bush, and Donald Trump.  Such specificity in a Roman document is unusual. Normally it requires reading between the lines to see who is being condemned.

The editorial has come under some criticism by those who feel the authors do not understand the complexities of American religious traditions. Nitpickers should remember that this is an editorial, not a scholarly article. Its fundamental point is certainly valid: There has been an unholy alliance between Catholic and evangelical conservatives who have attempted to make their churches the Republican Party at prayer.

This alliance has given theological justifications to stupid wars and given spiritual cover to those who want to ignore the needs of the poor by arguing that abortion trumps all other issues. Such an alliance is corrupting to both churches and politics. It is an abomination to everything that Francis holds sacred.

I do have some minor quibbles with the editorial.

First, the attempt to bring Catholics into this unholy alliance began with Richard Nixon, not Ronald Reagan. Nixon used the race card to woo Southern evangelicals and ethnic Catholics into the Republican fold. No explanation of American politics can ignore race.

Second, I believe that the authors, like many academics, take theology and religious leaders much too seriously. True, they do have some impact, but it should not be exaggerated.

In the last two elections, evangelical leaders did not get the Republican nominees they wanted. Mitt Romney was not their candidate until he clinched the Republican nomination. And when it came to Trump, the evangelical leaders followed their people; they did not lead them. Their fawning over Trump after his nomination and election was disgraceful.

Which brings me to my final point. What motivates American voters is not theology, despite the fact that we are a very religious people.

Fear and anger are the great motivators. Fear of the other, the outsider, the competitor, the foreigner. Fear of unemployment, of losing one’s house, of losing status, of your kids ending up worse than you. Fear of crime and terrorism. Anger at the other who got the job you believe you or your kid should have gotten. Anger at a government that is distant, uncaring, and ineffective.

Theology and religious leaders can stoke the anger and fear, but it is already there. They pour gasoline on a fire that is smoldering.

So, my recommendation to my friends at La Civiltà Cattolica is that their next editorial balance the prophetic voice of this one with a pastoral compassion for those who were seduced by the ecumenism of hate. Just as Francis went into the slums of Buenos Aries to learn how to be a pastor, so, too, progressives have to go to the small towns of the Midwest, the rust belt of middle America, and the coal country of Appalachia to understand Trump supporters and their anger and fear.