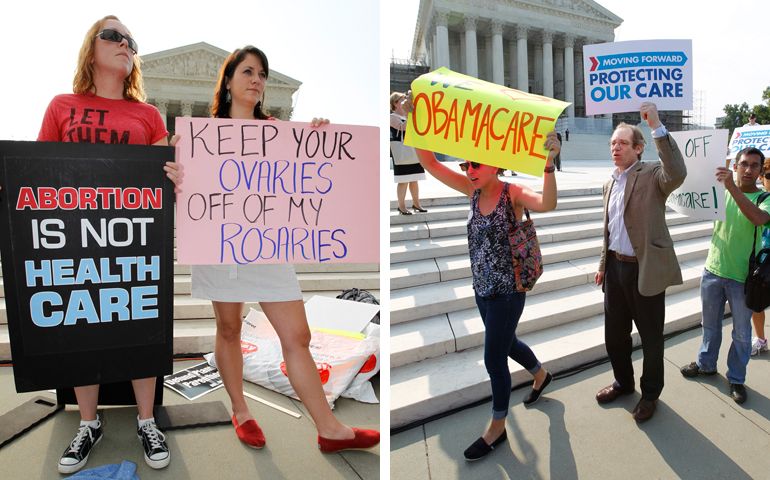 People on both sides of the debate on the Obama administration's health care reform law demonstrate June 28, 2012, in front of the U.S. Supreme Court building in Washington. (Photos by CNS/Bob Roller)

Attacking public policy because it is not perfect is one of the most common practices in American politics. It is easy because no public policy is perfect. There is always something wrong with it. We live in an imperfect world.

There is a positive side to such criticism when it is focused on improving the imperfect, but it takes on a negative spin when it is used to simply shoot down any idea without presenting a practical alternative.

Likewise, it is easy to criticize the re-establishment of diplomatic relations with Cuba. The Castro government is not democratic; it does not respect human rights when they are seen as a threat to the regime. But isolating Cuba for 50 years has accomplished little for the Cuban people. In fact, our embargo has provided the Castro regime with the excuse it needed to stay in power despite its economic failures. All of Cuba's problems, they said, can be blamed on the embargo. Meanwhile, American companies are not allowed to do business with Cuba.

Does Cuba have a worse human rights record than Vietnam, than China, than Saudi Arabia? We have diplomatic relations with these countries and American corporations do business with them.

The Catholic church has never required perfection in politics or diplomacy. Unlike the United States, the Vatican never broke diplomatic relations with Cuba, and today, the Cuban bishops say the embargo is a bigger problem for them than government restrictions on religious freedom.

The nuclear agreement with Iran is another imperfect deal. It would be wonderful if Iran stopped supporting Syrian President Bashar Assad and Hezbollah and began accepting Israel's right to exist. But rejecting the nuclear agreement will not bring about those ideal results. It will just mean that the supporters of Assad and Hezbollah and the enemies of Israel will have an easier path to nuclear weapons.

People seem to forget that President Ronald Reagan was willing to negotiate imperfect nuclear arms deals with the "evil empire" when communism was still in control of the Soviet Union and Eastern Europe. Nixon established diplomatic relations with China when Mao Zedong was still in charge. He also ended the war in Vietnam.

Actually, it is the left that has the most to complain about from international agreements. The left believes free-trade agreements have devastated manufacturing and wiped out middle-class jobs in the United States. They especially object to North American Free Trade Agreement as a job-killer. They unsuccessfully opposed passage this year of the trade promotion authority that allowed the president to negotiate the Trans-Pacific Partnership and to present it to Congress for an up or down vote without amendments.

It is cliche but true to say that the desire for the perfect can be the enemy of the good. Perfection is rarely the result of politics. Conflicting views lead to compromises based on prudential judgments about what is possible. Often, the best we can hope for is incremental improvements or even lesser evils than the alternatives.