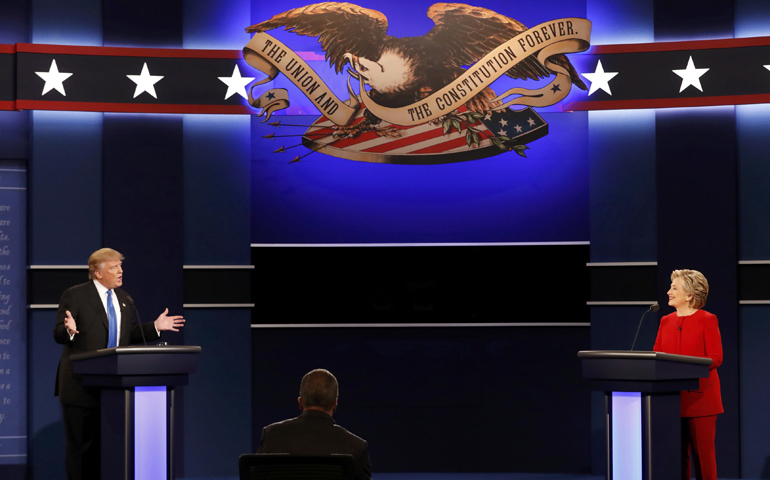 This is a column I do not want to write. I am so sick of this election and the entire political process. Partisanship has become so bad that it blinds members of one party from any facts or views that are contrary to the party's. Politics just is not fun anymore. It is depressing.

When I was in my 20s, I chose political science over math because I believed that politics (in the Aristotelian sense of the word) was the way that the people joined together for the common good. Issues of war and peace, of justice and prosperity were what politics was supposed to be about. As a high school student, when all my classmates fell in love with John F. Kennedy, I was inspired by Barry Goldwater, a man of principle with a clear vision.

It took a two-semester course on the U.S. Supreme Court and the Constitution to show me that Goldwater's view of the Constitution was simplistic -- much like a fundamentalist's view of the Bible. Martin Luther King Jr. and the civil rights movement taught me that I had no idea what my country was really like. And the Vietnam War, which I initially supported, undermined my belief that America could succeed at anything to which it put its mind. And then there was Watergate.

Politics is messy, I learned. As a graduate student at the University of California, Berkeley, I did my dissertation on the politics of taxation. I saw lobbying by interest groups and learned about the role of campaign contributions and back-room deals. As a lobbyist for tax reform in the late 1970s, I attempted to move the process in the right direction but lost almost every battle.

I gave up lobbying for journalism and ended up covering politics in the church as much as politics in the United States. I had pretty much despaired of both until the Holy Spirit surprised us with Pope Francis.

When I was a student of U.S. politics, many of my classmates complained that the parties did not stand for anything. It was Tweedledee and Tweedledum. They wanted parties that really stood for something, like the European political parties.

Beware of what you wish for.

At that time, the Democratic Party was composed of the urban working class in the North plus the solid South. This party only existed at the national level for presidential elections and in Congress, where the two factions controlled congressional assignments. But while the Northern and Southern Democrats voted together on the selection of committee chairs and congressional leaders, they quickly split on important legislation. What really controlled the legislative process was what political scientists called the "conservative coalition," Southern Democrats plus Republicans.

The only time progressive Democrats really controlled Congress in my lifetime was after the 1964 election that gave Lyndon B. Johnson the supermajority he needed to pass civil rights legislation. This legislation killed the Democratic Party among white Southerners, as Johnson himself predicted. Today, the conservative coalition has been replaced by the Republican Party.

We now have political parties that stand for something, and it is creating gridlock in Washington. While in the past, compromises and deals could be made, today, everything is a matter of principle. After the 2008 election, Republicans decided that total opposition to President Barack Obama was the best strategy for regaining the White House, which leads us to this week's debate.

People are mad at the Democrats because they promised a lot and delivered little. The Democrats have been unsuccessful in convincing the nation that it was the Republicans who kept them from doing anything.

Meanwhile, Republicans are criticized for caring only for fat cats and not the little guys who abandoned the Democrats because of social and racial policies.

Voters are disillusioned by professional politicians and so-called experts. The establishment has not delivered, so people are looking for a strongman who will blow up the system and make things work.

It is not only Americans who are tempted to elect a strongman. The Philippines elected and continue to support an authoritarian strongman who has no problem with the extrajudicial killing of drug dealers. In election after election in Europe, we have seen voters turn against the establishment experts.

This is also not the first time America has been tempted by a strongman. Franklin D. Roosevelt feared that if he failed, the country would turn to either Huey Long, the Southern populist, or Gen. Douglas MacArthur.

The frightening refrain from Donald Trump supporters is that they want someone who will blow up the system and get things done. Trump himself appears to think that being president is like being the CEO of a large corporation where he can simply order people around and fire anyone who disagrees with him.

That is not how the founding fathers wrote the Constitution. Rather than having an elected king, they created a system of checks and balances that makes it difficult to get things done unless people are willing to cooperate and compromise.

The problem today is that the United States has ideologically driven parties like Europe but not the European parliamentary system. European parliaments elect prime ministers, who represent a political party or a coalition of parties. Responsibility for failure in Europe clearly resides in the party of the prime minister. Under the U.S. Constitution, responsibility for failure is not so clear. Is it the president? Is it the House or Senate? Is it the president's party or the opposition?

Both the left and the right are frustrated by the constitutional system that makes it difficult to get things done. Progressives put their hope in Obama and were disappointed. Then they hoped for Bernie Sanders, but the party went for the establishment Hillary Clinton. Meanwhile, conservatives hoped for someone like Ted Cruz and got a populist egomaniac, Trump.

Americans are on the edge of rejecting its constitutional system because their political parties and political professionals have failed them. One of the great human experiments is at risk. This election will solve little, but it could make matters even worse.

Despite all this, I will keep trying, and I will vote. Citizenship is not just a privilege, it is a duty. Part of our problem as citizens is that we give up too easily when things get tough. The trouble with democracy is that it takes too many evenings. Politics is hard work. Cynicism is too easy.

So we must continue to work for a better America. But I now wonder if I should have gone into math.