Saudi Arabia, from the past into the future 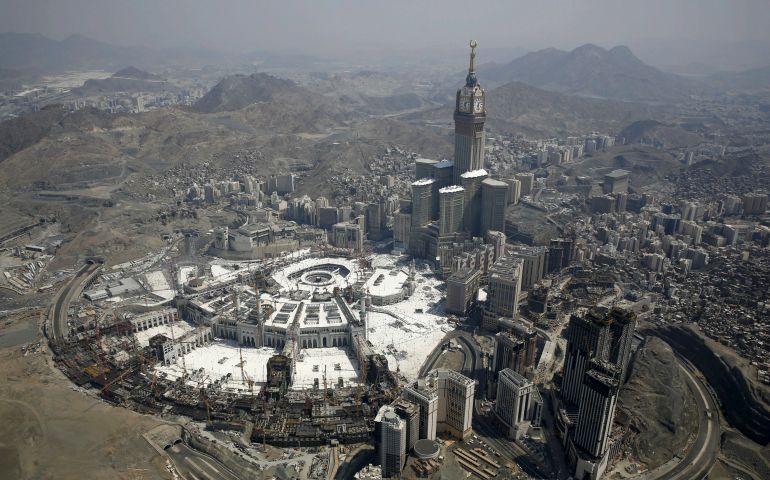 An aerial view of the Grand Mosque is seen on the second day of Eid al-Adha, during the annual haj pilgrimage in the holy city of Mecca, Saudi Arabia, in 2015. (CNS photo/Ahmad Masood, Reuters)

To Westerners, Saudi Arabia is a strange mix of archaic traditions and futuristic ambitions. Its leadership wants to adapt to modern technology and economics but at the same time preserve much of its religious and cultural heritage. Those who have visited the kingdom over the past few decades have reported remarkable changes.

Saudi Arabia is ruled by a royal family, and the state religion is Wahhabism, a strict version of Sunni Islam. No churches or synagogues are allowed in the kingdom, nor is any missionary activity permitted. A Saudi who converts from Islam to another religion commits a crime. Atheism and denigrating Islam are listed as crimes under their counter-terrorism statute. Religious books or materials cannot be brought into the country.

For these and other reasons, U.S. Commission on International Religious Freedom and the U.S State Department have for years listed Saudi Arabia as a "country of particular concern" or CPC, a designation attached to the worst offenders against religious freedom.

Freedom of religion is especially a concern for the 10 to 12 million foreign workers who reside in the country. Western professionals living in foreign compounds are rarely harassed, but laborers from Asia and Africa have experienced difficulties.

While Saudi law forbids public worship by non-Muslims, it does allow private worship. A family praying together in their home is safe, but what happens when they invite neighbors and friends to join them? How many can gather in a home on a Sunday evening for a service? There is no written rule telling people what is permitted, which causes anxiety among worshipers. Saudi authorities seem to be evolving to a "don't ask, don't tell" approach to small gatherings, but enforcement can also vary depending on the whim of local officials.

The uncertainty makes Christians nervous when they gather because they risk the possibility of arrest and expulsion from the kingdom. They are cautious even when they attend services in embassies and consulates where a couple of hundred might attend. When Saudis ask why they are gathering, they say to talk about sports and entertainment. Saudi officials know what is going on; they just don't want it publicly acknowledged.

Catholics have established their own guidelines for services, keeping gatherings around 30 people. If a community grows to 50 congregants, they split the community. No Saudis are permitted at services. Although they have experienced raids in the past, they have been left alone for the past couple of years. On the other hand, a Protestant group got into trouble last year when it drew attention to itself with its loud music. A neighbor complained.

What has significantly improved the situation of Christians in Saudi Arabia is the reining in of the mutaween or religious police, whom even Saudis found intrusive. In the past, these officials and their vigilante allies had the authority to invade homes and arrest people for violating religious practices and customs. They were famous for chasing women, Saudi and foreign, who were not properly dressed. They also hunted down Christian gatherings.

Because of complaints from educated Saudis, the king stripped the religious police of the power to arrest or enter people's homes without permission. They must now wear photo IDs, which disempowered vigilantes, and must get regular police to make arrests.  While this reform was primarily in response to demands from Saudi citizens, it has also eased the burden on foreign workers who were harassed by the religious police.

Also delighted by the reigning in of the religious police are educated Saudi women who would be stopped if they were unaccompanied by a male relative or not properly dressed. Women still wear long dresses and  some sort of veil in public, and they still cannot drive a car. But everyone says that the situation for women in Saudi Arabia is getting better.

Younger women also say that things have improved but would like to see more progress. They especially point to the guardianship law, which does not allow a woman to make many decisions without the approval of her guardian.  A guardian can keep a woman from traveling, getting an education, or getting married. Women who live in cities and whose parents are educated tend to suffer less from the guardianship system, but in rural areas, the system can be oppressive.

Education, especially education abroad, is liberating Saudi women, and the state is responding slowly. Just last year, for the first time the Department of Justice certified women lawyers. One such lawyer created an app, "Know your rights," to inform women of their rights under Saudi law.

Other women take to Twitter with their problems. For example, when a car dealership would not sell a woman a car without her guardian's signature, other women on Twitter guided her through the law so that at the next dealership she had no trouble. Later, she did need her guardian when registering her new car at the DMV.

Sometimes the rules are incongruous. For example, Saudi Arabia has had women doctors for years and they are allowed to have male patients. But the same woman doctor might need her guardian's permission to have an operation.

While the Western media gives a lot of attention to women not being able to drive in Saudi Arabia, Saudi women looking for change are focused on reforming the guardianship system especially where it comes to their education, travel and healthcare.

Defenders of the guardianship system emphasize the duties of the male guardian. For example, every woman (single, married, divorced or widowed) has a guardian who is responsible for her financial wellbeing. She can sue him if he does not provide for her. They also claim she can sue if her guardian abuses his power and will not allow her to marry a good man or get an education. But successful suits require good lawyers and the luck of the draw with judges who have great discretion in interpreting the law.

Saudi Arabia is looking to the future when its growing population will not be supportable by its dwindling oil reserves. The government provides free healthcare and education, including paying for education abroad. It subsidizes many services and is expected to provide jobs for men. All of this is expensive.

Educational reform is key to preparing the Saudi population for a different work environment with greater stress on private sector employment. The latest in educational technology and methods are being adapted to Saudi culture in the hopes of creating a technologically savvy and entrepreneurial workforce.

Women will play a key role in that workforce. They are already outperforming men academically, and both foreign and Saudi companies prefer to hire Saudi women rather than Saudi men. Women work hard to prove themselves, while many Saudi men have a sense of entitlement after decades of benefiting from the riches that came from oil.

There is no question that the Saudi government is making reforms because it wants to improve its image in the international community. It is also doing it because it knows that it must change to survive economically in the future. But as a religious people, they must find theological explanations for their reforms.

The Catholic church explained the changes of Vatican II using the French "ressourcement" school of theological thought, which looked to early church thought and practices. Cultural accretions could be dropped without compromising the faith because it was seen as a return to a purer past.

Muslims are following a similar approach. For example, they look into their early history to discover that women and non-Muslims were treated much better in the time of Mohammad than today. Women did not wear veils. Mohammad's wife was a businesswoman. Christians and Jews were allowed freedom of worship.

Scholarly debate over texts also prepares the way for reform. For example, most Saudi scholars argue that the Koran teaches jihad only as a defensive war, never offensive. And the Koran, they argue, teaches obedience to the authorities of the country in which a Muslim resides. These and other theological opinions ground their condemnation of the so-called Islamic State (ISIL), terrorism and Iran.

As in the Catholic church, there is great resistance to change in Islam. Although the king is close to being an absolute monarch, he has to balance competing views within his own family, the religious establishment, and Saudi society. Change comes slowly after much debate and discussion in the Saudi media.

For example, right now there is a robust debate about establishing an entertainment industry in Saudi Arabia. Elderly Saudis remember a time when there were movie theaters in the kingdom, but the religious establishment was successful in banning cinema and concerts. Conservative religious leaders worry about mixing genders at public events. Even today, only men are allowed into soccer stadiums.

As a result of these restrictions, Saudis spend a lot of money on entertainment abroad in places like Dubai. The Saudi government would rather this money be spent in country where it would create new businesses with new jobs. Only recently, the first public concert was held in Saudi Arabia.

Other reforms are in response to the fear of radicalism and terrorism. The government has become more careful in funding foreign Muslim organizations. Textbooks are being reformed by removing incendiary and prejudicial language.  Radical religious leaders are not funded for trips outside the country. The government is even monitoring more carefully what is said by preachers in Saudi mosques. Progress is slow and not always complete, but it is occurring.

But while the government has been slowly cleaning up its act, there are still rich Saudi citizens who use their private fortunes to fund radical individuals and groups. Satellite preachers still spew hatred and division across Africa and Asia.

Saudi Arabia is a work in progress. Its citizens are hopeful for their future. They are still friendly toward America, which unlike Europe did not try to colonize them. They like Trump's negative attitude toward Iran, but they are as confused and uncertain about his stances as everyone else. The United States needs to support and encourage the reforms taking place in Saudi Arabia, but anti-Muslim rhetoric and actions would be harmful to both the Saudis and ourselves.

[Jesuit Fr. Thomas Reese is a senior analyst for NCR and author of Inside the Vatican: The Politics and Organization of the Catholic Church. Although he is chair of the U.S. Commission on International Religious Freedom, his views in this column do not necessarily reflect the views of the commission. His email address is treesesj@ncronline.org.]

World | Saudi Arabia, from the past into the future