Syria may go from awful to even worse 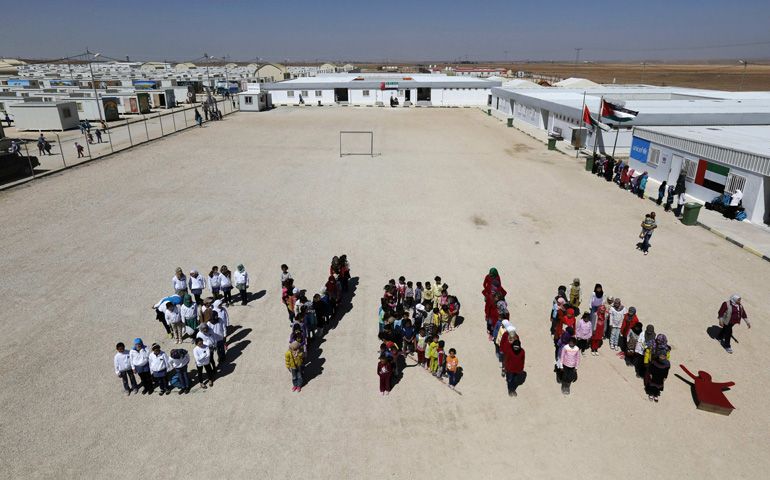 Syrian refugee children at the Mrajeeb Al Fhood refugee camp in Jordan form the word "Syria" during a March 15 event to commemorate four years of the Syrian conflict. (CNS/Reuters/Muhammad Hamed)

Syria has suffered like few countries in the world. Although it lived with minimal conflict for many years, its leader, Bashar al-Assad, maintained order through intimidation and terror. When peaceful demonstrators challenged his dictatorial rule, they were attacked, killed, or put in prison. What started as a civil war has become internationalized with the presence of the so-called Islamic State group and its opponents joining the fray.

Assad has spared no weapon in putting down resistance, whether it be chemical weapons, barrel bombs, artillery bombardments or snipers. The United Nations estimates that 220,000 have died in the war. There are disputes over what percentage of the dead are civilian, but they are certainly significant.

Meanwhile, the anti-Assad groups refuse to cooperate with each other and spend their time snapping at each other in the safety of Istanbul. Some of the so-called leaders have not been in Syria for years and have no credibility in the country.

Over in Iraq, the government has proven ineffective in dealing with the Islamic State. First, the Iraqi soldiers dropped their weapons and ran when faced with what amounted to a bandit gang in pickup trucks. Now the Iraqi government is teaming up with Shiite militias to retake Iraqi territory lost to the Islamic State.

As I mentioned in another column, using Shiite militias to retake Sunni territory is a dangerous exercise. It may have short-term gains but long-term consequences if the Sunnis are further alienated by Shiite revenge killings against the Sunni civilian population.

If the so-called Islamic State does suffer a defeat in Iraq, the likely side effect will be a flood of Islamic State fighters retreating to Syria, where they will find little organized opposition. In other words, a victory against the Islamic State in Iraq could make matters worse in Syria.

As bad as Assad was and is, many people in Syria wish they could push the clock back to a time when the country was not convulsed by war. This is especially true of the Christians who enjoyed relative religious freedom under Assad. They fear a victory by Islamic militants even more than they fear Assad.

In the northeast corner of Syria, there is a piece of land that pushes into Iraq. A road goes directly from Mosul to this corner of Syria. Islamic State fighters are already on the offensive in the province of al-Hasakah, capturing villages, killing defense forces, and enslaving women and children. They captured all villages on the south bank of the Khabur River and took some villages on the north bank.

This northeast corner of Syria is occupied mostly by Kurds but includes Assyrian Christians, Arabs, and others who established a democratic self-governing district with inclusive representation. They are trying to defend themselves, but they are only lightly armed and run out of ammunition during gun battles. Limited air strikes by the U.S.-led coalition have helped, but when the air strikes cease, the Islamic State fighters are back. The villagers are asking for weapons and ammunition to defend themselves.

Some obvious things need to be done.

First, the locals in these Syrian villages need weapons and ammunition to defend themselves. These are not radical groups; they are locals with roots in the territory. Turkey, however, fears growing Kurdish influence in the region.

Second, U.S. air power needs to focus on closing the back door out of Mosul and into Syria. Rather than bombing Mosul and causing thousands of civilian casualties, the U.S. should watch for retreating Islamic State forces (especially tanks and other heavy equipment), which will become easy targets as they flee through open terrain. Someone needs to keep them from entering Syria. It will be a challenge to distinguish Islamic State militants from retreating refugees, but to the extent the Sunni civilians are treated well in Mosul, there will be fewer refugees.

Finally, the world needs to be much more generous in helping the almost 4 million Syrian refugees and the countries into which they have fled -- Lebanon (1.14 million), Jordan (608,000) and Turkey (815,000). In addition, there are almost another 8 million people internally displaced.

Syria is a disaster area. There is a danger that pushing the Islamic State out of Iraq will make matters worse in Syria. Syria needs our help and assistance.

Justice | Syria may go from awful to even worse

Negotiations should end the conflict and bring political transition in Syria