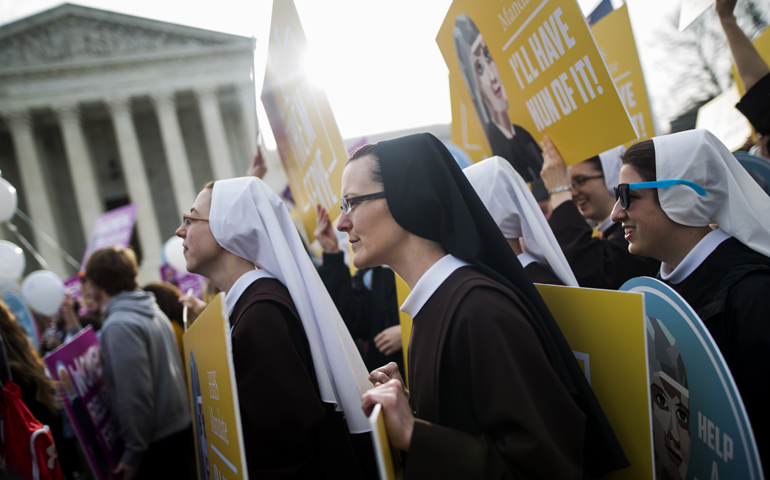 Catholic bishops and organizations, along with their lawyers, claimed victory when the U.S. Supreme Court sent their contraceptive mandate case back to the lower courts. Most other commentators, however, judged that the justices punted because they were split four to four on the case and preferred to postpone the case rather than issue a split decision.

The case, Zubik v. Burwell, is a dispute over government regulations requiring employers to provide free contraceptives in their insurance plans as part of the Affordable Care Act, aka, Obamacare. Churches are completely exempt from the mandate.

The regulations impose heavy fines on any employer who refuses to provide free contraceptives, and these fines would hit any religious employer who does not give notification of its religious objection.

The religious groups argued in Zubik v. Burwell that the government was violating their religious freedom by requiring that they notify the government or their insurance company of their objections to the mandate. This, they said, amounted to a "permission slip" allowing the insurance company to provide contraceptives. Signing such a permission slip, they said, would violate their conscience.

One thing is clear from the Supreme Court's decision. The plaintiffs who are opposed to the contraceptive mandate cannot be penalized for not giving notification of their objections to the mandate as was required by the regulations.

The court ruled that the plaintiffs in fact notified the government when they sued, and as a result cannot be penalized. The court opinion stated:

This is a clear victory for the plaintiffs. They will not be penalized for not sending a letter to the government or for not sending Form 700 to their insurance company.

But a strict interpretation of the opinion would also mean that every other religious group objecting to the mandate now has to sue if it does not want to use the notification process in the regulations. Suing, of course, will be much more expensive than filling out a forum or writing a letter.

It also may simply be a temporary solution to the problem. "The government has been notified for this year," says Professor Douglas Laycock, an expert on religious freedom at the University of Virginia Law School. "Another notice will be due next year, or whenever one of these plaintiffs changes insurance companies."

Hopefully, the government will do the proper thing and change its regulations so they tell insurance companies what to do if a religious employer tells them they do not want to pay for contraceptives.

Meanwhile, the government can consider itself notified and move ahead implementing the contraceptive mandate.

"Nothing in this opinion," said the court, "precludes the Government from relying on this notice, to the extent it considers it necessary, to facilitate the provision of full contraceptive coverage going forward."

The court did not strike down any other part of the regulations. "Nothing in this opinion," it said, "is to affect the ability of the Government to ensure that women covered by petitioners' health plans obtain, without cost, the full range of FDA approved contraceptives."

What is the next step?

It could be as simple as the government telling the lower courts, "We consider ourselves notified. We will proceed with telling the plaintiffs' insurance companies to pay for the contraceptive coverage as implemented in the regulations. Thank you very much. We are done."

At this point, the plaintiffs can raise their many other objections to the regulations.

The burden is on the plaintiffs to convince the circuit courts, seven out of eight of which agreed with the government the first time around. Now that the plaintiffs are no longer required to do anything, they are going to have a much harder time arguing that their religious liberty is being infringed.

"The Court is clearly hoping that the parties can now settle this case with a mutually acceptable procedure going forward," explains Professor Laycock. "My prediction is that that won't happen. The government can issue new regulations that tell all insurance companies what to do when a customer asks to have contraception excluded from their plan. That would dispense with the need for notices. But the plaintiffs say they would still object unless the insurers provide contraception in a way that both the insurers and the government say is unworkable and illegal."

There are many complex issues that need to be resolved, for example, how to deal with religious organizations that are self-insured. These issues should be resolved through serious negotiations rather than in the courts.

All this litigation has cost money that could have been spent elsewhere. Both sides risk losing in the courts if they do not resolve their differences. The parties need to find a compromise or the courts may end up making decisions that neither side likes.