Discover your treasure, share it with others, pope tells young people 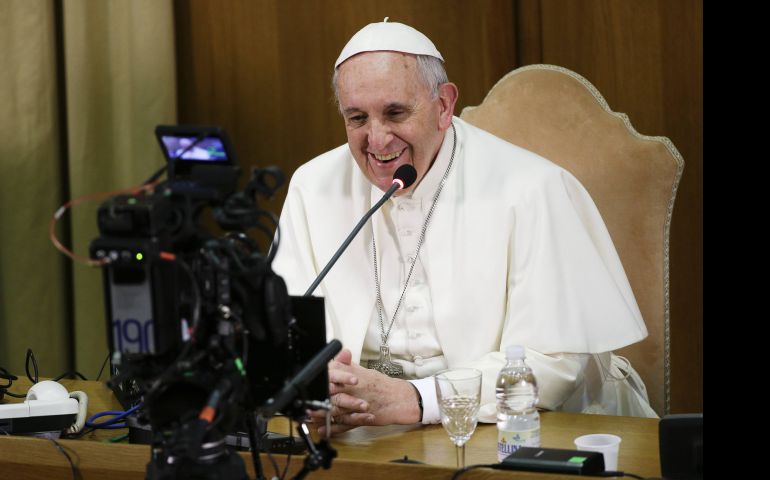 Pope Francis looks into to a camera during a worldwide broadcast online as he leads a meeting for the Fourth World Congress of Educational Scholas Occurrentes in the synod hall at the Vatican Feb. 5. (CNS/Reuters/Max Rossi)

Vatican City — Everyone is born with a treasure chest of gifts and talents that they need to discover and share, Pope Francis told a group of young people with disabilities who explained to him how technology has brought them joy and helps them communicate.

Seven young people from six countries shared their stories with the pope and asked him questions Feb. 5 during a Google Hangout, a live video conversation online.

"You help us understand that life is a beautiful treasure that has meaning only if we share," the pope told the young people.

Alicia, a 16-year-old amateur filmmaker from Spain, asked Francis if he, too, likes to take photographs and upload them to his computer.

"Do you want me to tell you the truth," he asked the young woman with Down syndrome. "I am a disaster with machines. I don't know how to deal with a computer. It's embarrassing, isn't it?"

The videochat with the pope came at the conclusion of a gathering in the Vatican of Scholas Occurrentes, a project Francis supported as archbishop of Buenos Aires and expanded as pope. Through schools it links students from different neighborhoods, countries, economic backgrounds and faiths to promote communication, understanding and cooperation.

Isaiah Bauer from Kearney High School in Kearney, Neb., and his schoolmate Teynor Karson also were part of the Google Hangout. Bauer told the pope he has difficulty keeping up with his studies and that his "lack of fine motor skills" slows down his writing and typing.

"What do you do when you face something difficult?" Bauer asked the pope.

"First, I try not to get angry, stay calm. Then I try to figure out how to do it, to overcome the difficulty. If that is not possible, I try to endure it until I have the possibility of overcoming it," he said. "We should not be afraid of difficulty. We are capable of overcoming anything, but we need time to understand, intelligence and courage to keep moving forward."

Manoj Kumar, a 13-year-old from India, who told the pope he is a big fan of Bruce Lee films on YouTube, asked the pope how the Scholas Occurrentes project can help young people.

Pope Francis ended the conversation with the young people by telling them and the thousands of other children watching online around the world, "All of you have a chest, a box, and inside there is a treasure. Your job is to open the chest, discover the treasure, develop it, give it to others and receive from others the treasures they offer."

Some people discover their treasure quickly, the pope said, but sometimes "it's like playing treasure hunt because it is not found easily. But once you find it, share it."

"Each one of us has a treasure inside," he said. "If we keep it there, closed up, it will stay there. If we share it with others, the treasure will multiply with the treasures that come from others. What I want to ask of you is that you do not hide the treasure that each of you has."

People | Discover your treasure, share it with others, pope tells young people

Francis is asking us to take sides

Salvation in the city: Be neighborhood apostles, pope urges laity