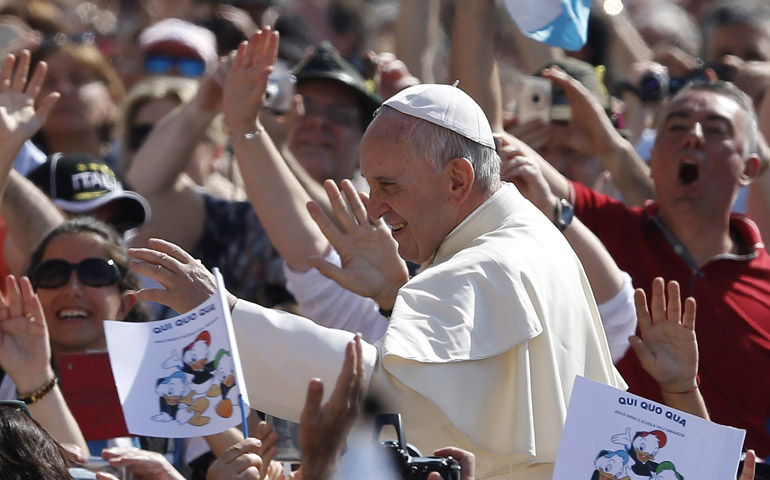 Pope Francis greets the crowd as he arrives to lead his general audience Wednesday in St. Peter's Square at the Vatican. (CNS/Paul Haring)

The closer two people are to each other, the more care is required in respecting the other's freedom and feelings, Pope Francis said.

Even Jesus knocks at the door of a person's heart awaiting permission to enter, he said Wednesday at his weekly general audience in St. Peter's Square.

"Intimacy does not authorize you to take everything for granted," he said, starting a series of audience talks he said would look at the "real life" of families today.

The audience was held on the feast of Our Lady of Fatima. The pope began the gathering by praying silently before a statue of Mary and, after a Portuguese aide summarized his talk, the pope asked him to lead the Hail Mary in Portuguese. The aide complied, his voice breaking with emotion at the surprise request.

Pope Francis' main talk focused on the three phrases he often recommends families use frequently: May I? Thank you. Forgive me.

The words are simple, he said, and hearing the pope advise their frequent use could make someone smile at first. "But when we forget them, it's no laughing matter, right?"

The three phrases, he said, "open the path to living well in a family, living in peace." Without them, he said, the family's foundation develops "cracks that can even make it collapse."

"Sometimes it seems that we are becoming a civilization of bad manners and dirty words as if they were a sign of emancipation. We hear them so often, even publicly," he said. "Kindness and an ability to say 'thank you' are almost seen as a sign of weakness."

Families must work hard to counter that tendency, he said.

"We must be uncompromising in educating people in gratitude and thanksgiving," the pope said. "If family life ignores this, our social life will lose as well."

In addition, he said, "for believers, gratitude is at the very heart of faith. A Christian who does not know how to give thanks is one who has forgotten God's language."

"Listen up, eh," he told the estimated 25,000 people in the square, and repeated the sentence.

Pope Francis said a "very wise" woman once told him, " 'Gratitude is a plant that grows only in the soil of noble souls.' The nobility of soul, the grace of God, pushes one to give thanks. Gratitude is the flower of a noble soul."

Asking permission, even to do something that one thinks one has a right to do as a husband, wife, parent, son or daughter, is a sign of respect, the pope said, and one that builds trust.

"The more intimate and profound love is," he said, "the more it requires respect for the other's freedom and an ability to wait for the other to open the door of his or her heart."

The most difficult and most important phrase of all, he said, is "forgive me."

"It's not for nothing that in the prayer Jesus taught us, the Our Father, which summarizes all the things essential for our life, we find this expression: 'Forgive us our trespasses as we forgive those who trespass against us,'" the pope said.

With God and with loved ones, "recognizing one has failed and wanting to restore what was lacking -- respect, sincerity, love -- makes one worthy of forgiveness," he said. "That's how you stop the infection."

"So many wounds in the family, so many breakups begin with the loss of these precious words: 'Forgive me,' " he said.

As he has done on many occasions, the pope said that while fights are never a good thing, they are normal, and even if "plates fly" in the heat of the moment, a sincere apology and request for forgiveness -- sometimes even just a caress -- can restore the peace.