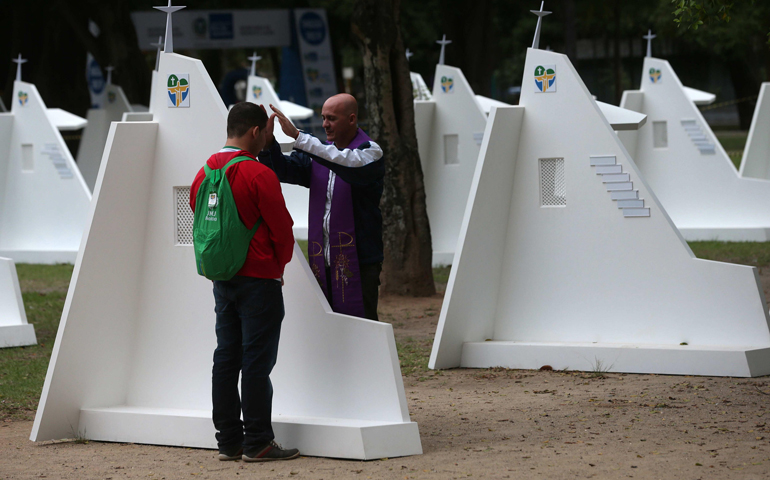 Hearing a Catholic's confession should be awe-inspiring for a priest, an experience that makes him look at his own life and willingness to convert, Pope Francis told a group of seminarians, new priests and priests who hear confessions in the major basilicas of Rome.

"Let yourselves be educated by the sacrament of reconciliation," he told them Thursday.

Hearing someone's confession, he said, should lead the priest to make an examination of his conscience, asking, for example, "Do I, the priest, love the Lord like this old lady does?" Or, "Am I, as a confessor, willing to change and convert like this penitent, who I am here to serve?"

"These people edify us. They edify us," the pope said.

Some 500 seminarians and newly ordained priests were attending a course on the sacrament of penance organized by the Apostolic Penitentiary, the Vatican office that also coordinates the work of confessors in St. Peter's Basilica and the other major basilicas in Rome.

Cardinal Mauro Piacenza, head of the Apostolic Penitentiary, introduced the pope and thanked him for emphasizing the importance of the sacrament of reconciliation during his first two years in office. "In everyone's hearts," he said, "you are the pope of mercy."

Pope Francis, who made substantial additions to his prepared text, told the priests and seminarians that in their ministry, the sacrament of reconciliation must be an opportunity to educate Catholics about God's unending mercy and an opportunity for priests themselves to grow in holiness.

The only people God will not forgive are those who do not want God's forgiveness, just like only those who stand in the shade are not warmed on a sunny day, Pope Francis said.

When people come to confession, he said, it should be an experience of "peace and understanding" and never one of "torture."

"Everyone should leave the confessional with happiness in their hearts and a face radiant with hope even if sometimes, as we all know, it is bathed with the tears of conversion and the joy that comes from that," the pope said.

A good minister of God's mercy, he said, is one who is able to find balance, gently leading the penitent to recognize his or her sins without conducting "a heavy, finicky and invasive interrogation."

Taking both God and the penitent seriously, he said, means not pretending that nothing the person's confesses is really a sin, but neither can the priest put on the robes of a judge.

"Too often people confuse being merciful with being lenient," he said. Saying, "Oh, go on, that's not a sin" is just as bad as insisting over and over, "but the law says this," he told them. "Neither response takes the penitent by the hand and accompanies him or her on the journey of conversion."

"This is very important," he said. "Mercy means taking a brother or sister by the hand and helping him or her walk."

The best way to find the right balance, the pope told the group, is for the priest to pray often and to recognize his own sinfulness and need for mercy.

"If you've never done that horrible thing the penitent tells you about, it's always because of God's grace," he said.

Administering the sacrament of confession is a blessing, the pope said. It is the occasion for seeing how good people are and how sincerely they love God. Most priests, he said, will have witnessed "real and true miracles of conversion" in the confessional.

"How beautiful it is to welcome these repentant brothers and sisters with the blessing embrace of the merciful Father," the pope said.

Priests always must remember that they were not chosen as priests because of their expertise in theology or canon law or because they have a special talent, he said. "We all have been made ministers of God's mercy purely by the grace of God, freely and for love, or rather, for mercy."

Remember, he said, "I've done this, this and this, but now I am called to forgive."

When listening to someone confess a sin "with so much pain or fragility," Pope Francis said, the priest should experience shame for his own sins. "This is a grace."