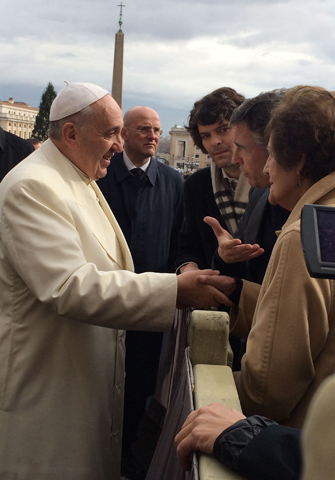 Philomena Lee, the real-life Irish woman whose life story is the center of the Oscar-nominated film “Philomena,” met Pope Francis on Wednesday.

The film has earned four Oscar nominations, including best picture, and Stephen Frears, the film’s director, expressed hope Pope Francis would watch the feel-good film, which some critics say is rife with anti-Catholic undertones. But the Vatican’s chief spokesman, the Rev. Federico Lombardi, recently quashed that speculation.

“The Holy Father does not see films and he will not be seeing this one,” Lombardi said.

The film tells the tale of Lee’s struggle to track down her son, who was taken from her in a Catholic home for unwed mothers in 1952, when she was 18. According to Lee’s account, the church actively blocked her efforts — and those of her son — to reunite.

Lee, 80, and her daughter, Jane Libberton, attended a private audience with Francis, and then Lee briefly met the pontiff.

“There is no way I could have ever imagined it,” Lee said of meeting Francis. Asked if she felt resentment against the church, Lee said, “You can’t go through life being so unyielding; you’ve got to forgive.”

Lee and Libberton are co-founders of The Philomena Project, which was created to lobby the church and the Irish government to open up records to make it easier for some of the estimated 60,000 women separated from their infant children to track each other down.

“I have always put great faith in the church and the goodwill to put the wrongs of the past right,” she said in a statement after the meeting. “I hope and believe that his Holiness Pope Francis joins me in the fight to help the thousands of mothers and children who need closure on their own stories.”