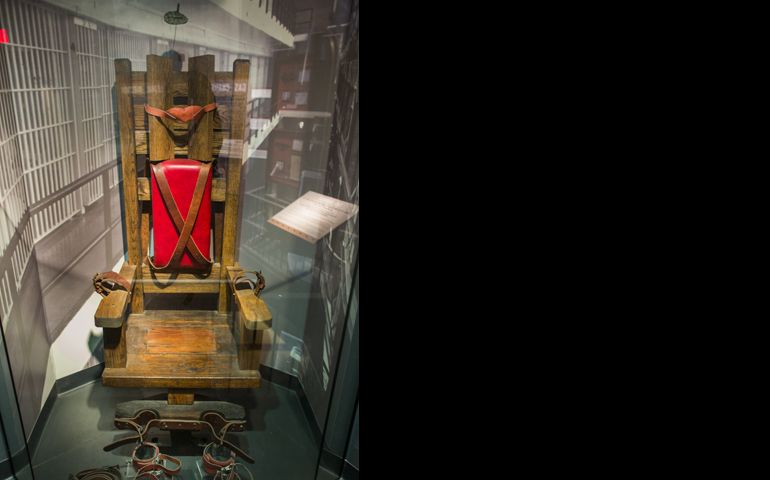 Pope Francis called for abolition of the death penalty as well as life imprisonment, and denounced what he called a "penal populism" that promises to solve society's problems by punishing crime instead of pursuing social justice.

"It is impossible to imagine that states today cannot make use of another means than capital punishment to defend peoples' lives from an unjust aggressor," the pope said Thursday in a meeting with representatives of the International Association of Penal Law.

"All Christians and people of good will are thus called today to struggle not only for abolition of the death penalty, whether it be legal or illegal and in all its forms, but also to improve prison conditions, out of respect for the human dignity of persons deprived of their liberty. And this, I connect with life imprisonment," he said. "Life imprisonment is a hidden death penalty."

The pope noted that the Vatican recently eliminated the death penalty from its own penal code.

According to the Catechism of the Catholic Church, cited by Pope Francis in his talk, "the traditional teaching of the church does not exclude recourse to the death penalty, if this is the only possible way of effectively defending human lives against the unjust aggressor," but modern advances in protecting society from dangerous criminals mean that "cases in which the execution of the offender is an absolute necessity are very rare, if not practically nonexistent."

The pope said that, although a number of countries have formally abolished capital punishment, "the death penalty, illegally and to a varying extent, is applied all over the planet," because "extrajudicial executions" are often disguised as "clashes with offenders or presented as the undesired consequences of the reasonable, necessary and proportionate use of force to apply the law."

The pope denounced the detention of prisoners without trial, who he said account for more than 50 percent of all incarcerated people in some countries. He said maximum security prisons can be a form of torture, since their "principal characteristic is none other than external isolation," which can lead to "psychic and physical sufferings such as paranoia, anxiety, depression and weight loss and significantly increase the chance of suicide."

He also rebuked unspecified governments involved in kidnapping people for "illegal transportation to detention centers in which torture is practiced."

The pope said criminal penalties should not apply to children, and should be waived or limited for the elderly, who "on the basis of their very errors can offer lessons to the rest of society. We don't learn only from the virtues of saints but also from the failings and errors of sinners."

Pope Francis said contemporary societies overuse criminal punishment, partially out of a primitive tendency to offer up "sacrificial victims, accused of the disgraces that strike the community."

The pope said some politicians and members of the media promote "violence and revenge, public and private, not only against those responsible for crimes, but also against those under suspicion, justified or not."

He denounced a growing tendency to think that the "most varied social problems can be resolved through public punishment ... that by means of that punishment we can obtain benefits that would require the implementation of another type of social policy, economic policy and policy of social inclusion."

Using techniques similar to those of racist regimes of the past, the pope said, unspecified forces today create "stereotypical figures that sum up the characteristics that society perceives as threatening."

Pope Francis concluded his talk by denouncing human trafficking and corruption, both crimes he said "could never be committed without the complicity, active or passive, of public authorities."

The pope spoke scathingly about the mentality of the typical corrupt person, whom he described as conceited, unable to accept criticism, and prompt to insult and even persecute those who disagree with him.

"The corrupt one does not perceive his own corruption. It is a little like what happens with bad breath: someone who has it hardly ever realizes it; other people notice and have to tell him," the pope said. "Corruption is an evil greater than sin. More than forgiveness, this evil needs to be cured."

Mother's principles were tested and found true after daughter's murder