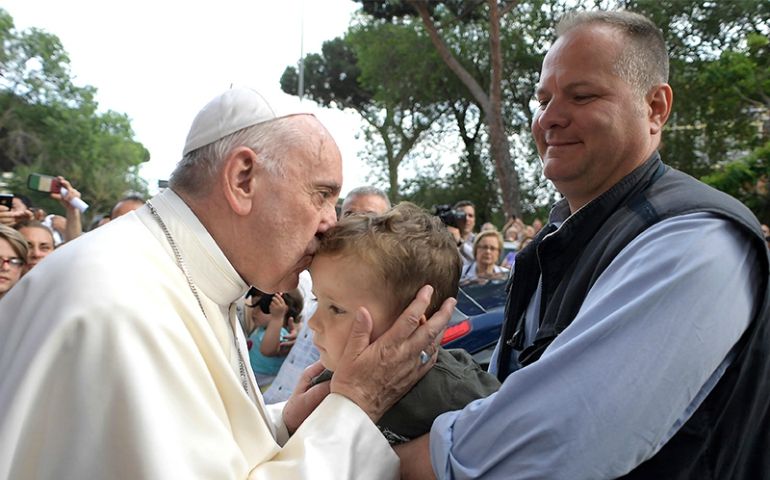 Pope Francis kisses a child as he arrives to bless houses during his visit to Ostia, on the outskirts of Rome, on May 19, 2017. (Osservatore Romano via Reuters)

Ostia — Pope Francis has made a surprise visit to a poor beachside town south of Rome where he went door-to-door blessing families.

The Vatican said in a statement that the pope visited public housing projects May 19 in Ostia, 20 miles south of the Italian capital, to express his “closeness” to those living in the parish of Stella Maris, or Star of the Sea.

It was the latest example of the pope’s “Mercy Friday” activities, his personal community outreach initiative that began during his Jubilee Year of Mercy in 2016.

This time the 80-year-old pontiff visited around a dozen families, chatted and joked with them and apologized for “the disturbance,” the Vatican statement said. Francis also left rosary beads as gifts.

The Vatican compared the pope’s visit to the regular Easter blessings that are usually conducted at this time of year by parish priests.

“Two days ago Fr. Plinio Poncina, parish priest of Stella Maris, one of the six parishes in Ostia, put up notices on the doors of the public housing building warning families he would come to do his usual Easter blessing,” the Vatican statement said.

“There was great surprise today when residents saw Pope Francis ringing the bell, instead of the parish priest.”

Ostia, which is popular with swimmers and sun lovers in the summer months, also has a reputation for Mafia infiltration and violence.

Friday’s visit was the pope’s latest attempt to reach out to the poor and the marginalized.

In November Francis paid a visit to seven families with men who had left the priesthood to marry and have children.

On other “Mercy Friday” visits in 2016 the pope met with recovering addicts, women who had fled prostitution and infants in a hospital neonatal unit.