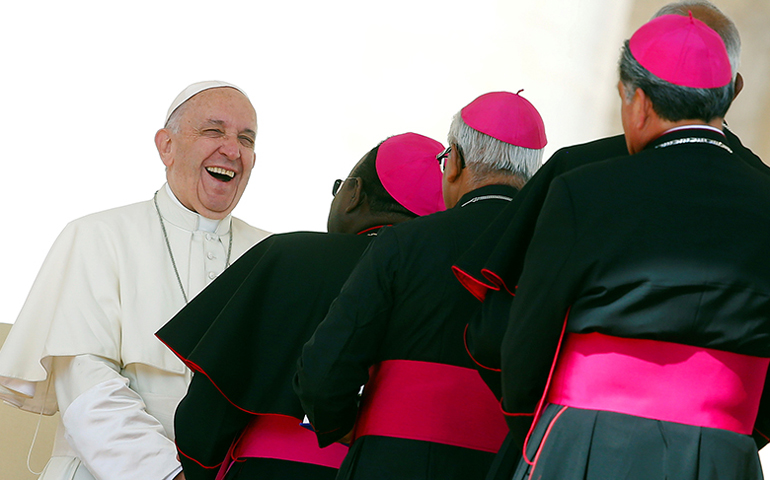 Pope Francis smiles Sept. 7 as he greets bishops at the Vatican. (Reuters/Remo Casilli)

Pope Francis told a group of recently appointed bishops that the world "is tired of charming liars" and that they should embody mercy in their dioceses and not be whiners who promote their own "vain crusades."

The pontiff also told them to be wary of seminarians "who take refuge in rigidity" of practices. "There's always something ugly behind it," he said.

Francis made his remarks Friday in a speech to newly appointed bishops who have been taking part in an annual Vatican orientation course on their new job.

In his address, the pope focused mostly on the approach they should take as pastors, saying in effect that attitude would do more to build up the diocese than any special management techniques.

"Be bishops who are able to enchant and attract," Francis said. "Make your ministry a symbol of mercy, the only force able to seduce and attract the human heart in a permanent way."

But, he warned them, don't make it all about yourself.

"This is a danger! The world is tired of charming liars. And, I might say, of 'trendy' priests or bishops," Francis said.

"People can sniff out -- the people of God have the perceptiveness of God -- and run away when they recognize narcissists, manipulators, defenders of their own causes and hawkers of vain crusades."

Trust in the mercy of God, let mercy "form and inform" every diocesan structure, he said, and don't give up in frustration and "invent bitter speeches" to justify "laziness."

"The complaints of a bishop are ugly things," he said.

With many bishops struggling with a shortage of priests, Francis also warned them not to be "tempted by numbers and quantity" of vocations but rather to focus on "quality."

He added that they should help priests-in-training to be prepared for the rigors of their vocation.

In conclusion, the pope reminded the new bishops of the need to "make mercy pastoral" by using "prudence and responsibility" in staying close to families, especially those in difficulty.

Be like the Good Samaritan, he said, who accompanies the many people who are "wounded" by life and in need of a helping hand.

Church leaders today often "ask too much fruit of trees that have not been sufficiently cultivated," and he said bishops should accompany their priests and their people with patience in every difficulty.

"I urge you be among them with discernment and understanding," the pope said.

The pope referred to his Jubilee Year of Mercy as an opportunity for "a personal experience" of gratitude and reconciliation.

"The most precious richness you can bring from Rome at the beginning of your episcopal ministry is the awareness of the mercy with which you have been seen and chosen," he said.

Earlier last week Francis and members of his nine-member Council of Cardinals discussed ways to improve the process of identifying the best priests to become bishops.