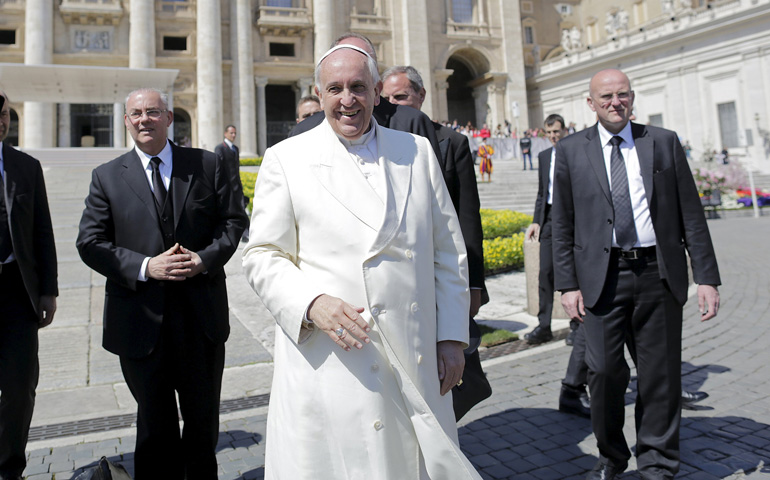 Children are never a "mistake" and no sacrifice is too great for an adult to make so that children can feel their worth, Pope Francis said.

During his weekly general audience in a chilly but sunny St. Peter's Square on Wednesday, the pope continued his series of talks about the family, dedicating a second catechesis to children. He described the great suffering and difficulties many children around the world experience as "a Passion."

Children are the greatest blessing God has bestowed upon men and women, he said. Yet many children are "rejected, abandoned, robbed of their childhood and of their future," the pope noted, adding that it is "shameful" when people say it is "a mistake" to bring a child into the world.

"Please, let's not unload our faults on children," he said. "Children are never 'a mistake.' "

The hunger, poverty, fragility and ignorance of some children "are not mistakes" but "only reasons for us to love them even more, with more generosity," he said.

Pope Francis wondered aloud about the value of international declarations of human and children's rights if children are then punished for the mistakes of adults.

"All adults are responsible for children and for doing what we can to change this situation," he said.

"Every marginalized and abandoned child, who lives by begging on the street for every little thing, without schooling or healthcare, is a cry to God," he said. Their suffering is the result of a social system, created by adults, he added.

Children who are victims of such poverty often "become prey to criminals who exploit them for immoral trade and commerce or train them for war and violence," he said.

Even in rich countries, "many children live dramas that scar their lives heavily" because of family crises or inhuman living conditions, he said. They suffer the consequences of "a culture of exaggerated individual rights" and become precocious, he added. And often, they absorb the violence they are exposed to, unable to "dispose of it," and "are forced to become accustomed to degradation," the pope said.

"In every case, these are childhoods violated in body and soul," the pope said. "But none of these children is forgotten by the Father in heaven. None of their tears are lost."

The pope also said children, too often, suffer the effects of their parents' precarious and poorly paid work or unsustainable work hours. Children, he said, "also pay the price of immature unions and irresponsible separations; they are the first victims." He underlined the social responsibility of each person and government toward children.

The pope offered a reflection on the Scripture passage when Jesus calls the children to him so that he can bless them, Mt 19:13-15. "How beautiful was the trust of these parents (to bring their children to him) and this response of Jesus," he said.

The pope said many children with serious problems benefit from "extraordinary parents, ready for every sacrifice and generosity." The church must accompany these parents in their efforts, he said.

"The church places her maternal care at the service of children and their families," he added. "It brings God's blessing to the parents and children of this world, maternal tenderness, firm reprimand and strong condemnation. Brothers and sisters, think carefully: You don't mess with the lives of children."

He concluded by inviting his listeners to imagine a society that bases itself on the principle that "no sacrifice on the part of adults would be considered too costly or too great, anything so as to avoid that a child thinks they are a mistake, that they have no value and that they are abandoned to the wounds of life and to the arrogance of men."

"How beautiful such a society would be," the pope said.