Pope Francis tells Ukrainian bishops to stay out of politics 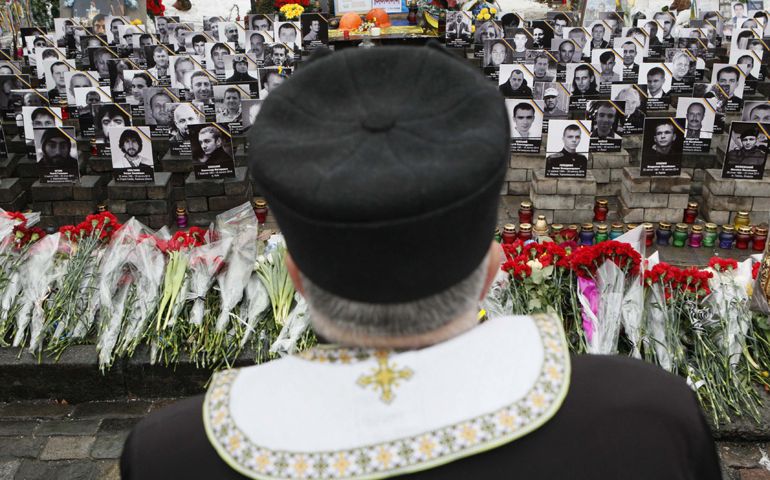 A clergyman stands near photos of people killed in Ukrainian protests in 2014 at a commemorating ceremony Friday in Kiev's Independence Square. (CNS/Reuters/Valentyn Ogirenko)

Vatican City — Pope Francis has called on Catholic and Latin-rite bishops in Ukraine, which is immersed in continuing violence and social unrest, to stay out of political debates and focus their energies on caring for their people and in reaffirming Christian values.

Speaking in separate audiences Friday to Catholic, Greek Catholic and Byzantine Rite Catholic prelates of the country, Francis said he understood that "recent historical events that have marked your land are still present in the collective memory."

But, the pope said, those events are not for bishops to respond to.

"These are questions that have in part a political basis and to which you are not called to give a direct answer," he said. "But there are also sociocultural and human tragedies that await your direct and positive contribution."

"In these circumstances, what is important is listening attentively to the voices that come from your territory, where the people entrusted to your pastoral care live," he continued.

"Listening to your people, make reminders to them of the values that characterize them: encounter, collaboration, capacity to resolve disputes," Francis said. "In a few words: The search for possible peace."

Francis spoke Friday in meetings in the Apostolic Palace with the separate groups of prelates, whom he met successively. The pope's words come after Ukraine marked a new ceasefire agreement Feb. 15 that has done little to stop fighting in the country, which has been ongoing since Russia's annexation or seizure of the Crimean peninsula nearly a year ago.

According to the U.N., some 5,000 people have died in the conflict and more than 800,000 have become refugees from the violence.

While Ukraine is primarily a Christian country, the majority of its population identifies with separate Moscow- and Kiev-based branches of Orthodox Christianity. Greek Catholics, who are Eastern Rite Catholics in communion with Rome, make up about 14 percent of the population. Latin-rite Roman Catholics make up just over 1.5 percent.

Francis told the prelates Friday that while they are citizens of their country, they should not promote "concrete political action."

"You are full citizens of your country, and therefore have the right to display, even in common form, your thinking about its destiny," he said.

He continued: "Not in the sense of promoting a concrete political action, but in the indication and reaffirmation of the values that make up the constituent element of Ukrainian society, persevering in tireless pursuit of harmony and the common good, even in the face of serious and complex problems."

The pope also assured the prelates that the Vatican is "at your side, even in international forums, to make understood your rights, your concerns and the right Gospel values that motivate you."

The pope then exhorted the bishops to speak for the poor and those who have been most affected by the violence.

"The crisis triggered in your country has had, understandably, a serious impact in the lives of families," Francis said. "This is combined with the consequences of that misguided sense of economic freedom that allowed the formation of a small group of people who have greatly enriched themselves at the expense of the vast majority of citizens."

"The presence of this phenomenon has polluted to varying degrees, unfortunately, even the public institutions," he continued. "This has generated to an unjust poverty in a rich and generous land."

"Never tire of making present to your fellow citizens the considerations that faith and pastoral responsibility suggest to you," Francis said. "The sense of justice and truth, before being political, is moral, and this task is also entrusted to your responsibility as pastors."

"The more you will be free ministers of the Church of Christ, the more, even in your poverty, you will be defenders of families, the poor, the unemployed, the weak, the sick, the elderly pensioners, the disabled, and displaced persons," he said.

"I urge you to be careful and considerate toward the poor. They are your wealth," the pope concluded. "You are pastors of a flock entrusted by Christ. May you become more aware of this, even in your internal organs of self-government."

Francis' speech was not broadcast or televised, but the text was made available by the Vatican press office.

Dalai Lama says Pope Francis is unwilling to meet: 'It could cause problems'

New York Catholics: a history of making a difference