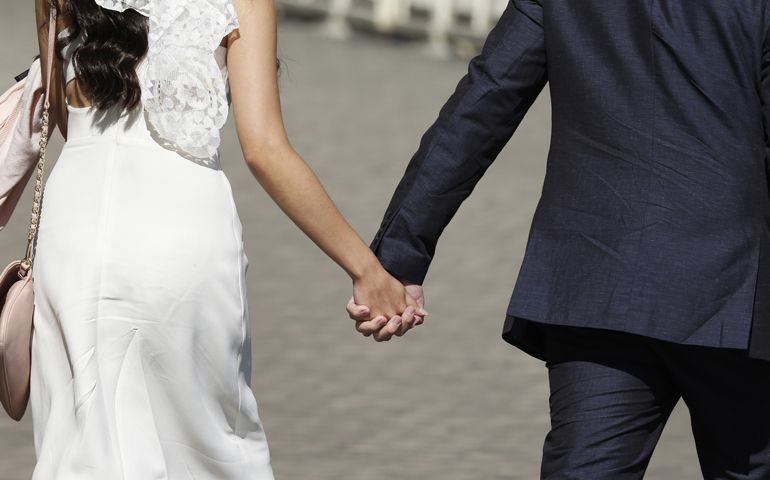 Vatican City — Couples who are seeking to marry, even those who have lived together, should value their engagement period as a time to grow in mature love and in profound knowledge of each other, said Pope Francis.

The pope urged couples not to rush into marriage. Maturation in love before marriage is a slow process, in which none of the steps should be skipped, Pope Francis told people at his weekly general audience in St. Peter's Square.

"The covenant of love between a man and a woman, a covenant for life, cannot be improvised; it cannot be done from one day to the next," he said.

There is no such thing as "an express marriage," he added.

While it is "beautiful" that people today can choose whom to marry, the "freedom of this bond" cannot be based simply on physical attraction or feelings, he said.

Engagement allows a couple to do the profound and "beautiful work of love" -- work that involves a profound "learning" of the other.

"Love requires" this work, he said.

"The love between a man and a woman is learned and is refined," he said, adding that married love must be understood more as something couples need to work on.

"Turning two lives into one is also almost a miracle, a miracle of the freedom of the heart, given in faith," he said.

Citing the Book of Jeremiah, the pope noted that God speaks of his covenant with his people in terms of an engagement. Then, after a long road, God "marries his people in Jesus Christ," he said.

He said the church has preserved the distinction between being engaged and being married.

"They are not the same," he said, adding that this teaching has been verified in the "experience of conjugal love happily lived."

In an oblique reference to the physical intimacy some couples share before marriage, the pope said the "powerful symbols of the body hold the keys to the soul."

"We cannot treat the bonds of the flesh lightly, without opening some lasting wound in the spirit," he said, noting the current culture is indifferent to this teaching in Scripture.

In a later summary of his catechesis in Spanish, the pope said the current "consumer culture" tries to turn love into an "object of consumption." Instead, an engagement "allows a man and a woman to mature in a responsible decision regarding something so big that it cannot be bought or sold."

The distinction the church maintains between engagement and marriage is precisely to protect the profound meaning of the sacrament of marriage, he said. It is important to revalue engagement as "an initiation to the surprise of the spiritual gifts with which God blesses and enriches families," he said.

The church, he said, offers marriage preparation courses as an expression of its care for couples. In his Italian catechesis, the pope noted that many couples come to marriage preparation courses reluctantly. But they are grateful afterward for the opportunity to reflect on their relationship in profound ways because while many have been together for a long time, and even live together, "they really do not know each other," he said.

Engagement is also a time for couples to rediscover together the Bible, prayer -- both personal and liturgical -- confession, Communion and fellowship with the poor, he said. Growing in these areas "leads to a beautiful marriage celebration," not one that is worldly but one that is Christian, he added.

The pope also gave engaged couples a reading assignment; Alessandro Manzoni's classic novel The Betrothed, which is the story of a couple who remains faithful to each other throughout their engagement despite much hardship.

The pluses and minuses of married priests