Pope urges young people to use their freedom to share love, faith 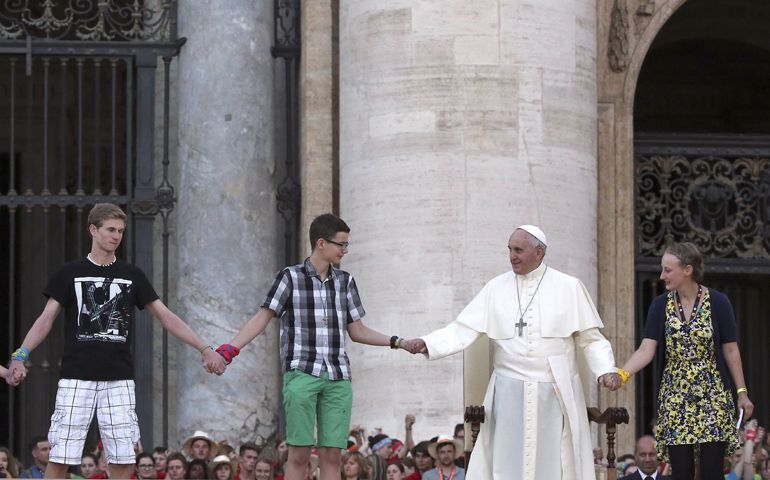 Pope Francis holds hands with young people during a meeting with altar servers Tuesday in St. Peter's Square at the Vatican. (CNS/Reuters/Stefano Rellandini)

Vatican City — Meeting 50,000 altar servers, Pope Francis urged young Catholics to make careful use of their freedom, treasure their dignity as sons and daughters of God and make time to pray each day.

"If you follow Jesus and his Gospel, your freedom will blossom like a plant in bloom and will bring good and abundant fruit," the pope said Tuesday. "You will find authentic joy, because he wants us to be men and women who are happy and fulfilled."

The pilgrimage to Rome, sponsored by the German bishops' conference, included tens of thousands of Germans ages 13 to 27, but also altar servers from Austria, Switzerland, Lithuania and northern Italy. The five-day pilgrimage included Masses and talks focusing on the freedom God gives to people and the challenge of using it well.

For the first time in his pontificate, the pope gave a short public homily in German -- a language he learned in the late 1980s when he worked on his doctorate in Germany.

During evening prayer with the young people, he said, "God showed us that he is a good father. How did he do it? Through the incarnation of his son, who became one of us."

In Jesus, the pope said, "we can understand what God really wants. He wants human beings who are free because they always know they are protected like the children of a good father."

Still preaching in German, the pope said God needed a human being to bring his plan to completion: Mary, who "was totally free. In her freedom, she said yes."

Later, responding in Italian to questions three young people posed in German, Pope Francis asked the young people to be very attentive when serving Mass, a service that "allows you to be close to Jesus, the word and bread of life."

"I'll give you some advice: the Gospel that you listen to during the liturgy, read it again personally, in silence, and apply it to your life; and with the love of Christ, received in holy Communion, you can put it into practice," he said.

The young people asked the pope what their role in the church should be, how they could reconcile church activities with other activities and responsibilities and how they could experience the freedom he is talking about when their lives are governed by family and school rules.

Pope Francis told them the world needs "people who witness to others that God loves them, that he is our father," and that they are the ones who need to share that good news with their peers.

People are called to feed the hungry, clothe the naked and heal the sick, but "we disciples of the Lord have another mission as well: that of being channels that transmit the love of Jesus."

Just as the hungry long for food, he said, many young people need someone to show them "that Jesus knows us, loves us, forgives us, shares our difficulties and supports us with his grace."

Pope Francis told them that "time is a gift from God" but, like other gifts, it must be used well. "Perhaps many young people waste too much time in useless things: chatting on the Internet or with your mobile phone ... the products of technology that should simplify and improve the quality of life, but sometimes take attention away from what is really important."

As for time management, Pope Francis told the young people, "but you're German and you do this well."

No matter what people do each day, he said, "one priority must be that of remembering that Creator, who allows us to live, who loves us and accompanies us on our journeys."

Responding to the question about freedom, Pope Francis said that if people do not use it well, it leads them far from God and "can make us lose the dignity with which he has clothed us," which is why the church, one's parents and schools make rules and give young people guidance.

A misuse of freedom "can transform into slavery, slavery to sin," he said. "Dear young people, do not use your freedom unwisely. Don't squander the great dignity of being children of God that has been given to you."

Pope urges young people to use their freedom to share love, faith