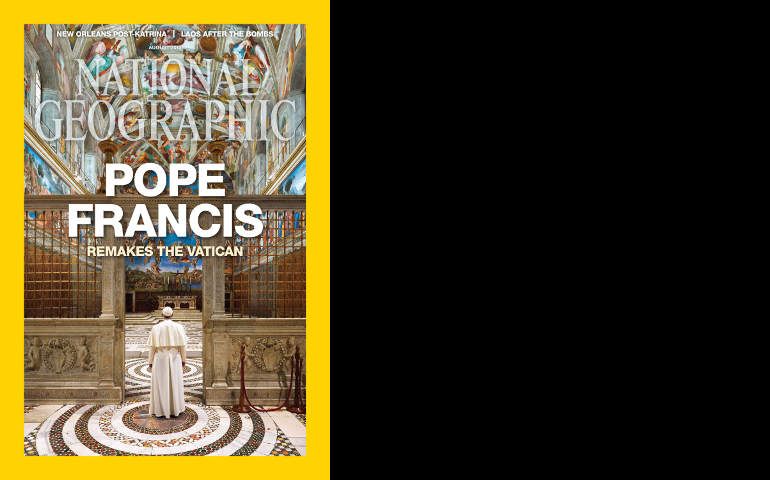 The cover of the August 2015 issue of National Geographic.
This article appears in the Francis in the United States feature series. View the full series.

Pope Francis has graced the cover of a diverse group of magazines, including TIME, Rolling Stone, LIFE, Vanity Fair, The New Yorker and The Advocate, to name a few.  Now comes National Geographic magazine. Its August 2015 issue had an iconic photograph of Pope Francis enjoying a quiet moment in the Sistine Chapel after his “Urbi et Orbi” address on Christmas Day 2014. But a pope on the cover of National Geographic magazine?

The fact is a pope has never been on the cover of an issue of National Geographic magazine. Another surprise by the pope of surprises.

The magazine’s editor in chief, Susan Goldberg, who joined National Geographic in April 2014, explained. “We cover culture, people and places,” Goldberg said in a telephone interview with NCR. “Religion is a good way to connect with culture,” she said.

The magazine has published cover stories on Jesus and the Bible in years past, and its December 2015 issue will focus on Mary, the mother of Jesus, who is venerated in widely different cultures and parts of the world. That issue will present Mary as “the most powerful woman in the world.”

For its August magazine cover story, National Geographic secured unprecedented access to Pope Francis to photograph him up close and personal.

In May 2014, Goldberg, Dave Yoder, a National Geographic photojournalist living in Rome and Milan, and Robert Draper, a best-selling author and a writer for the New York Times Magazine and National Geographic, met with the Pontifical Council on Social Communications and pitched their idea. They convinced the council representatives on the merits of the project and were given permission to proceed.

Yet, there was no guaranty that the project would be a success. “The biggest challenge was simply to pull it off, as the Vatican is a difficult place for journalists to work in,” said Yoder.

Yoder realized very early on that unless he was able to secure significantly more access to the pope than normally offered to the media, the project would not meet the National Geographic’s standards and would not make it in the magazine.

But Yoder did receive some extraordinary assistance.

With the permission of Don Sergio Pellini, director of L’Osservartore Romano, the daily newspaper of the Vatican City State, photographers Francesco Sforza, Simone Risoluti and Mario Tomassetti, immediately took the 6’5” Yoder under their wings.

“They are remarkable people,” said Yoder. “Francesco is beloved by everybody. He has to allow an extra 15 minutes every time he walks from Point A-to-Point B because people want to talk to him.” Though these newspaper photographers gained nothing from helping Yoder, they were pivotal to Yoder’s success.

“I’ve never met anyone like these photographers [at L’Osservartore Romano],” said Yoder. “Without their generosity and selflessness, there would not be a story in the [National Geographic] magazine or a book.”

With unprecedented and unfettered access over a period of six months, Yoder took 68,000 photographs of Francis and the people with whom the pope interacted. Meanwhile, Draper undertook original reporting in Rome, Argentina and the United States and wrote the introduction and four essays for the book. The result: Pope Francis and the New Vatican (National Geographic Society, 2015), a stunning book that attempts to capture the essence of the man and the institution he now leads.

According to Draper’s introduction in the book, Archbishop Claudio Maria Celli, president of the Pontifical Council on Social Communications, cautioned the National Geographic team that Francis “was more than the ever beaming, refreshingly accessible, and plain speaking new pope than met the eye … Celli hinted at the man’s seemingly contradictory subtleties, as well as ineffable spiritual qualities that eluded easy description.” Looking at Draper in particular, Celli said, “To capture the feeling of this man … well, I will pray for you.”

What was it like to photograph Pope Francis and spend so much time in such close proximity?

“Most of the time I was just doing my job, but every once in a while it dawned on me that ‘I’m standing next to Pope Francis’.”  “Yeah, it was surreal,” said Yoder.

Once while photographing people attending a general audience, Yoder turned back and ascended the steps to move closer to Francis and no one prevented him from getting close to the pope. “That’s when I realized that I had something pretty exceptional,” said Yoder.

Yoder and the new book were part of Sept. 20 “60 Minutes” television show on Pope Francis.  60 Minutes Overtime has additional material of the Yoder interview.

A common experience for Yoder was watching people express raw emotions when meeting Francis. “There are no walls between the people and the pope,” said Yoder.  “It’s a pretty rare thing to see people burst into tears when meeting the pope,” he said. “One bride had to turn away from the pope because she was trembling so much,” said Yoder. “As a photographer, this was very fertile terrain that kept bringing me back again and again,” he said.

For Draper, he writes that time seems to stand still when Francis encounters the afflicted.  “I know what Robert means,” said Yoder.  “It’s really about the pope’s sincerity,” he said.

The 254-page book contains four major sections, each combining an essay by Draper and a selection of photographs by Yoder. Draper’s essays, “The New Vatican,” “The Life of Pope Francis,” “The Tradition of the Vatican,” and “A Changing World,” were combined with photo galleries titled “A Place Like No Other,” “Families and Francis,” “Ceremonies and Celebrations,” and “The Pope of the People” respectively. The book also includes several pages of papal history and global data about the church.

Draper, who spends half his time covering political figures for the New York Times Magazine, is a generalist who takes on a wide variety of assignments. He described this assignment as “an irresistible force [Pope Francis] meeting an immovable object [the Vatican] creating a cultural sonic boom.”

“I’m not a Catholic. I was raised Protestant, but I was eager to learn,” said Draper. “But Pope Francis has affected me and has changed the Catholic church, but also spirituality beyond Catholicism, beyond Christianity and to non-believers,” he said.

Draper got to work. He spent a month in Rome and about three weeks in Argentina.  While in Rome, he met with Yoder to discuss the story as a big picture, but also to bore down into analyzing different people he interviewed and day-to-day schedules.  “I prefer to work closely with the photographer and Dave is a real photojournalist who thinks about the story,” said Draper. The admiration was mutual. “Robert did a great job on the writing,” said Yoder.

When interviewing former students of then Fr. Jorge Bergoglio and old friends, Draper was struck how happy people were to talk about Bergoglio’s goodness. It was as if people wanted to confirm that who Francis is today, he was years ago.

“Pope Francis is a ‘porteño’ or man of the people,” explained Draper. “He wants the church to be available, accessible to the people and in reality and metaphorically, it all begins with him,” said Draper.

Draper believes that Pope Francis continues to be a person of contradictions, but with one major change.  He is a cerebral introvert and a ‘porteño’ who craves the company of others; he is strict and lenient.  “Still at root he is still a shy man who lives an austere life, who would be more than content to read books and enjoy the company of friends,” said Draper.

This past week in Washington, National Geographic hosted an evening with Cardinal Donald Wuerl of Washington, along with Goldberg, Yoder and Draper to discuss Pope Francis and his tenure as pope.

“Cardinal Wuerl spoke directly to the transformation of Cardinal Bergoglio into Pope Francis,” said Draper.  According to Draper, Wuerl said that the “burdens of office have ironically liberated Bergoglio.”

“What is different is that Pope Francis has responded to what he must be with such effusiveness and radiance,” said Draper.  “No one would have predicted this,” he said.

“Pope Francis has the opportunity to overhaul the church attitudinally with a focus less on sin and more on love, less about judgment and admonition,” said Draper. “And this begs a question: Will there be any other way for the church going forward?” “It’s hard for me to imagine things going back [to the prior way of doing things],” said Draper.

Jesuit Fr. Thomas J. Reese, a senior analyst for NCR, was interviewed by Draper and included in the book. “Two years ago if you asked anybody on the street, ‘What’s the Catholic church for and against,’ you would’ve gotten: ‘It’s against gay marriage, against birth control’ – all this stuff. Now if you ask people, they’ll say, ‘Oh, the pope – he’s the guy who loves the poor and doesn’t live in a palace.’ That’s an extraordinary achievement for such an old institution,” said Reese.

What impressed Yoder more than anything is Francis’ sincerity. “Invariably, people ask me ‘if the pope is for real’ and usually with those exact words,” said Yoder. “After watching him a fair amount of time, Pope Francis never appears to be anything but sincere,” said Yoder.

“Pope Francis is exactly who he appears to be,” said Yoder.

As archbishop of Buenos Aires, Bergoglio was a community leader and organizer. “As archbishop, it was pretty easy to contact local leaders and Bergoglio was a true intermediary,” said Draper. This was during a time of serious political and economic upheaval.

Draper expects to see the similar leadership on the global stage. “When you see how Pope Francis interposed himself in the Cuba-U.S. relations and allowed for secret meetings to take place at the Vatican, he’s not merely an advisor but is a real intermediary,” said Draper.

Though seasoned professionals, Yoder and Draper had some personal take-aways from the assignment.

As Christmas 2014 was approaching, Yoder was caught between going home to visit his sick father or staying in Rome to continue his work with Francis. Yoder got a message from his father to “not screw it up,” meaning to stay in Rome and finish his project.  Yoder did stay in Rome during the holiday. His father died in early January 2015. “At least I know what he wanted,” said Yoder.

For Yoder, the depth and breadth of this assignment has given him greater confidence to take on such big projects. Yoder hopes his next assignment will not require him to wear a suit. He says there are real complications for photographers when they have to wear suits.  “It was a remarkable experience,” said Yoder.

“I spend half my time covering politicians for the New York Times Magazine,” said Draper. “Politicians generally want to gain and maintain power,” he said.  Often how politicians get such power can entail unseemly behavior.

“With Pope Francis he has never sought out positions of leadership, he is not ambitious in that way,” said Draper.  “He’s one-hundred percent sincere.”

“It was rewarding to cover such a decent man,” said Draper said.

[Tom Gallagher is a regular contributor to the NCR and lead writer for the newspaper’s Mission Management column.]

Pope’s quotes: Orphans in their families