Georgetown prize aims to be 'Super Bowl of energy efficiency' 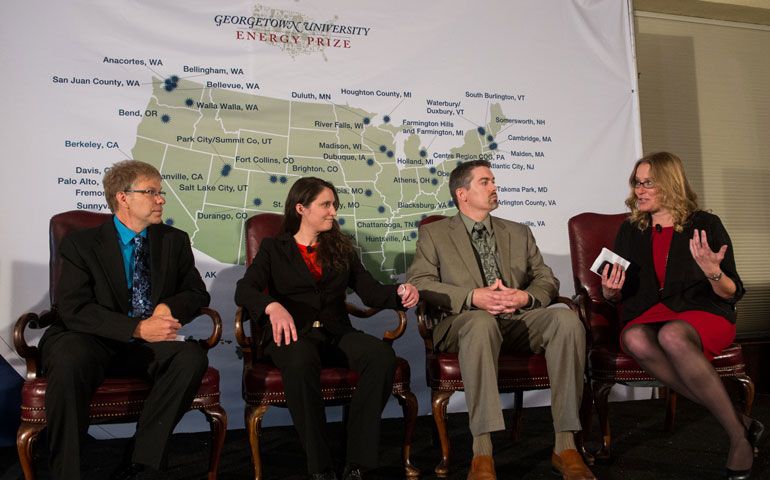 During the April 23 launch event in Washington, representatives from Fort Collins, Colo., Oberlin, Ohio, and Farmington Hills, Mich., talk with Cristin Dorgelo of the White House Office of Science and Technology Policy about their plans for the Georgetown University Energy Prize. (©2014 Georgetown University photos/Phil Humnicky)

Energy efficiency is about to become a lot more lucrative for one U.S. city.

"The ambition is to just turn this into the Super Bowl of energy efficiency," said Francis Slakey, founder and executive director of the Energy Prize, and the Upjohn lecturer in physics and public policy at the Washington, D.C., school.

The prize comes at a time when climate change has put energy usage in the forefront, but also at a time when the U.S. wastes half of the energy it burns. Additionally, federal resources for expanded energy efficiency programs have become more limited than they were during the 2009 Recovery Act, which saw the Energy Department invest $31 billion in clean energy projects. In October, the International Energy Agency called energy efficiency the "first fuel" toward cutting carbon emissions, reducing pollution and achieving cost-effective energy security.

The Georgetown competition will rank cities based on the amount of electricity and natural gas saved from 2015 to 2017 in their residential and municipal buildings. Transportation and commercial sectors are excluded from the competition. The application process remains open through the end of June.

During the quarterfinal stage that follows, accepted communities will submit detailed, long-term energy savings plans. The field then whittles for the semifinal stage that officially opens the competition in January 2015. At that point, cities will begin calculating the energy they've saved, with the finalists asked at the beginning of 2017 to submit final performance reports and summaries of future plans. Judges will award winners that June.

As of May 27, 60 communities had entered the contest, ranging from Somersworth, N.H., to Chula Vista, Calif., as well as Knoxville, Tenn., Atlantic City, N.J., Santa Fe, N.M., Fort Collins, Colo., and five from Silicon Valley. The competition restricts competing cities to those with populations of 5,000 to 250,000 -- a range that encompasses nearly 9,000 towns, or more than 65 percent of the country. The size restriction not only levels the playing field, but allows for a broader application of the top innovations.

"The winner is going to come up with something that actually could be replicated and deployed throughout vast sections of the country," Slakey said. "So we will have national impact."

The Energy Prize represents the latest endeavor in Georgetown's growing presence on the environmental stage. In August, the Jesuit school opened its Office of Sustainability toward a goal of cutting its carbon footprint in half by 2020. And last summer, President Barack Obama used the campus as the launch pad for his federal climate change plan.

The development of the Energy Prize was a "long steady path of progress," Slakey said, that began two years ago with a brainstorming session of mayors, city planners and energy efficiency experts.

"We just looked at one question, which is why is public participation in energy-efficiency programs so low and what could we do about it?" he told NCR.

Instead of exploring subsidies, tax breaks or increased federal energy policies, they decided to hold a competition, believing it an effective way to stir up passions and overcome hurdles that have in the past blocked people from taking the steps on their own, whether from a lack of time or a mistrust of the efficiency technologies' claims.

The Energy Department, among nine collaborating partners, provided initial help in organizing the competition and encouraging participation, and will provide ongoing support to competitors, largely through its Better Buildings Residential Network. The American Gas Foundation was the primary launch sponsor but has not provided funds toward the $5 million award.

Kathryn Clay, executive director of the foundation and vice president for policy and strategy for the American Gas Association, told NCR that it's not unusual for the industry to have an interest in energy efficiency, since most gas utilities employ a decoupling business model -- where customers pay a service charge rather than based on the energy used.

"Our interest is just in having people use natural gas, period. We don't have an interest in how much they use," Clay said.

While the competition focuses on reducing natural gas and electricity usage, communities have the freedom to consider clean energy in their plans, such as installing rooftop solar panels or arrays. The same freedom applies to how city leaders elicit buy-in among citizens. For some, the competition offers an opportunity to address climate change and reduce carbon footprints. For others, that message doesn't sell as well as emphasizing savings on individual utility bills. In an op-ed for Governing.com encouraging their peers to join the contest, the mayors of Dubuque, Iowa, and Salt Lake City cited the agonizing choice some face whether to pay for food or pay for energy.

"However they choose to talk about it to engage their community, the result is the same," Slakey said, "that overall energy use will be reduced and there's a corresponding carbon reduction as a result."

Communities just venturing into efficiency -- about half of the competitors -- can see 20 percent gains by encouraging simple in-home solutions, such as switching to energy-saving light bulbs and caulking windows. Some strategies could look at creative ways to deploy existing technologies, or developing financing strategies to retrofit homes without hefty upfront costs.

"You can actually retrofit their homes without the homeowner having to pay a dime, and that requires a lot of cooperation and very creative financing," Slakey said.

Or they could develop entirely new innovations.

While only one city will earn the $5 million prize, some have already noted other ways they can win. Duluth, Minn., has coined the slogan "five million and change," signaling the importance of a cultural shift as much as the money. Duluth officials also estimate that by achieving efficiency improvements of 6 percent, they would save $5 million, win or lose.

[Brian Roewe is an NCR staff writer. His email address is broewe@ncronline.org. Follow him on Twitter: @BrianRoewe​.]

Assisi diocese among 40 Catholic groups to divest from fossil fuels

Chicago parishes look to do more with less through energy efficiency