Confronting AIDS in Africa, one sister at a time

This column is part one of a series.

After a long career in the academy, most scholars look forward to a retirement free of the demands of teaching, writing and traveling.

For Margaret Farley, life as Professor Emerita of Christian Ethics at Yale University has meant deepening her commitment to confronting the HIV/AIDS pandemic on the continent of Africa.

"Who would have thought I would be doing this work at this stage of my life?" Farley told me during a recent interview at her office at the university. "What I've learned, though, is once you get on this road, you don't want to get off."

Remarkably, Farley found the path to this work seemingly by chance. 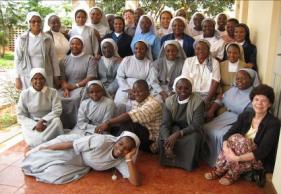 In November 2001, USAID, a non-governmental organization (NGO), was planning an international symposium as part of World AIDS Day. The focus was on the role of religious communities in responding to global HIV/AIDS.

When a keynote speaker had to cancel with only a few weeks' notice, conference planners found themselves scrambling for a suitable replacement. Farley, both an internationally renowned moral theologian and a Sister of Mercy, was an ideal substitute.

Members of the USAID team were so moved by Farley's speech, they asked if she would consider further study of the African HIV/AIDS pandemic. Although Farley had been touched personally by AIDS, having lost a beloved nephew to the disease years earlier, she hadn't previously taken it on as a global issue.

Farley recruited women faculty and several students (myself included) from Yale Divinity School to help her discern the most effective initiative. They decided to organize a consultation that would bring together African women from 50 different countries to discuss the pain and struggle they face in their battle against HIV/AIDS.

"We wanted to focus on women because they bear a disproportionate share of the burden of the pandemic. Not only are they more as vulnerable to infection, they also serve as primary caregivers to those who are infected," she said.

In sub-Saharan Africa, women account for 60 percent of those with HIV.

The consultation was powerful event. It is a rare occasion that women from such a spectrum of African countries gather together in one place to share their stories about HIV/AIDS. For three days, in words and ritual, these women found new solidarity as they voiced their fears, agonies and hopes.

During the course of the event, Farley encountered a number of Catholic women, several of them women religious. She saw an opportunity to have a concrete impact on their battle with the pandemic.

"Women religious already have a large network in place," Farley said. A religious community would provide an ideal entry point for outreach and organization.

"The relationships among sisters provide a rich source of information, contacts and resources," she said. "They are also respected by the people to whom and with whom they minister."

Farley invited Mercy Sr. Eileen Hogan to join her in the effort. Together, they created the All Africa Conference: Sister to Sister (AACSS) and received the endorsement of the Sisters of Mercy of the Americas to respond to the profound need of African women.

But Farley is quick to point out that sisters in the United States don't see themselves as empowering African women. Rather, they are only facilitating the mutual empowerment of African women.

"These women are so strong, but they have no resources," Farley said. "And patriarchy is alive and well in their cultures."

Farley and Hogan's essential role is to raise funds and offer some basic assistance in organizing the conferences.

"But one of our most important guiding principles has always been to put the agenda of the conferences into the hands of those affected by the disease,"
Farley said.

They helped to plan three regional conferences throughout Africa, beginning with an event in Nairobi in 2003. Women from eight countries attended that first meeting. Farley and Hogan joined them, but were intentional about the ways in which they would participate.

"This all had to be approached by thinking through what it means to work cross-culturally. We weren't going over there as Western missionaries," Farley recalled.

It was an emotional gathering. "They wept and wept because they finally got to talk: AIDS is in their families and in their church. It's everywhere, but nobody was talking about it."

As the meeting concluded, the African women recognized a crucial need for more conferences. "They knew that if they could break the silence, then it would also be broken in their ministries and among their laywomen co-workers."

The following year, women from six countries gathered in Pretoria, South Africa. In 2005, Nigeria was the site of the third conference attended by women from five countries.

Since these initial events, African women have gone on to plan their own gatherings. Today, more than 1,000 women from 21 African countries participate in AACSS conferences.

"We began by training trainers, and now they do the training themselves," Farley said. "They choose the speakers and design the program for each event."

Conferences typically last one week and consider issues related to sexuality, gender justice, culture, health and medicine. During the last two days of the meeting, the women are guided in creating action plans to take back to their constituencies.

Farley and Hogan are never on the agenda, but if asked to speak on a particular topic, they will arrange a special session. Naturally, Farley is often asked to address issues in moral theology.

"I give a presentation that offers several ways to think about an ethical question," she said.

Of course, the women want to know Farley's opinion, too.

"I tell them to wrestle with the issue, and then tell me what they think," she said. "It doesn't matter what I believe. All that is important is what makes the most sense for them."

Next year will mark the 10th anniversary of the AACSS. And for Farley, some of the most encouraging progress in Africa can be seen at the side of the road.

"When we started in 2002, silence reigned over sexuality and sexual behavior. Little education was provided," she said. "Now as you drive through many parts of Africa, you see information about AIDS on billboards. Both the media and new African governmental strategies have broken through the taboos."

For all of the developments they've fostered in education and communication, Farley also sees the work of AACSS as deeply ecclesiological.

Although AACSS has a clear and profound mission, Farley said she sees this project as the opposite of missionary work.

"The African sisters are up to this kind of work in a way few others in our church are."

Part two of this series will appear Wednesday, Dec. 21.

[Jamie L. Manson received her Master of Divinity degree from Yale Divinity School, where she studied Catholic theology and sexual ethics. Her columns for NCR earned her a first prize Catholic Press Association award for Best Column/Regular Commentary in 2010.]

Confronting AIDS in Africa, one sister at a time

We may need a hero more than we need a saint

A woman priest reflects on her 10-year anniversary

Panel contemplates why the papal encyclical on the environment will matter