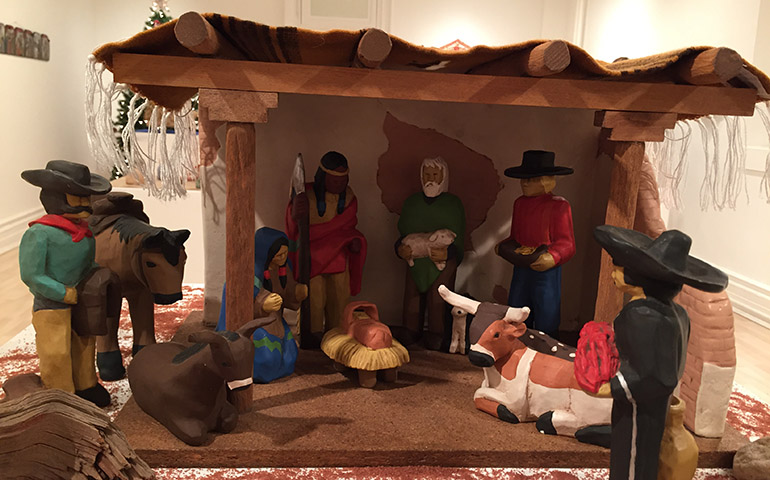 If St. Bonaventure’s account in The Life of St. Francis of Assisi is accurate, it was the much-beloved Francis himself who staged the very first crèche scene in Greccio, Italy, in 1223.

Gathering hay and corralling an ox and a donkey, "the man of God [St. Francis] stood before the manger," Bonaventure writes, "full of devotion and piety, bathed in tears and radiant with joy."

For Francis, the Nativity was an evangelist and theologian. It could enkindle the fire of faith in the Italian townspeople while also deepening their understanding of the Gospel story.

Nearly eight centuries later, just outside of New York City, a similar drive to educate and illuminate through the art of the crèche is on display in the show "Nativity Scenes from the Americas," hosted by the College of New Rochelle.

The exhibit features Nativity scenes from different countries in Latin America, the Caribbean, the American Southwest and Canada. And it shatters any sense of sentiment or piety that one may associate with the crèche.

The show’s curator, Professor Nereida Segura-Rico, a scholar of Spanish language and literature at the college, says the issues that currently dominate the national and global conversation, namely immigration, border security, and the refugee crisis, had a strong influence over the pieces she selected.

"What resonated especially with me as I put the exhibit together was the reminder that the Nativity story is about a poor migrant family," Segura-Rico said in an interview with NCR. "By focusing on the Americas, and not only on North or South America, the exhibit dismantles notions of others as alien people."

The exhibit draws from a set of crèches given to the college by Eileen Canty, who named the collection in honor of her late daughter, Kate. Canty is an alumna and retired professor of psychology at the College of New Rochelle.

Canty’s love of Nativity scenes led her to collect more than 1,000 crèches, retablos, and other artworks from 90 countries and 40 states. Though she has donated the bulk of the collection to various institutions, including her alma mater, to this day she keeps several dozen crèches on display year-round in her Manhattan apartment.

"People ask me why I don’t put them away after Christmas," Canty said in an interview with NCR. "I tell them, Christ is born every day."

Segura-Rico says that the richness of Canty’s pieces from the Americas convinced her to make the region the focus of the exhibit.

"As a scholar of Latin America, I was enthralled by how these figurative representations of the birth of Christ ground a universal story of divine presence in local contexts, that is, how they bring the story home," Segura-Rico says in the show’s curatorial statement.

For many communities in the Americas, particularly those with indigenous or Hispanic roots, the crèche is an enduring art form, one that invites artists to blend elements from their religious traditions and cultures. As a result, their work is a far cry from the typical Nativity scenes mass-produced in a factory.

Instead, a sacramental understanding of nature runs through each crèche. Many are molded from the stuff of the earth: wood, clay, animal bones, gourds, loofah sponges and eggshells.

Other artists use common materials that come from their location. In one set from Puerto Rico, the artist brilliantly fashions the Holy Family and the Magi out of horseshoe nails, while another crèche, from Mexico, is constructed out of recycled auto parts.

Not only are the artistic materials different, many crèches feature animals not typically seen in the standard Nativity. In some crèches from Central and South America, native species like llamas, jaguars and jungle birds keep watch by the family.

The gifts of the Magi offer some of the most creative expressions of the artist’s geographical and culture space. An Inuit scene is set in front of an igloo, with Joseph’s staff re-imagined as a spear and a small fish brought as a gift to the baby Jesus. A Navajo Nativity depicts gifts of tortilla flour and woven blankets, two items that are of the highest value to their nation.

Taking in these details, one gets the incarnational sense that all of creation, even the smallest creatures or the tiniest elements, celebrates and participates in the presence of God.

Canty says that years of meditating on the similarities and differences in each crèche led her to "realize that we all have different gifts and all can be used to do God’s work."

But the presence of crèches in the Americas also speaks of a troubled history. Spanish missionaries brought the art form to the New World. The native peoples quickly adopted these new holy figures as an expression of syncretism with their other deities. But for the missionaries, the goal was to eradicate any object of worship other than the Christian God.

The exhibit’s stunning examples of crèches made by the native people of New Mexico, including the pueblos of Zuni, Santa Clara and Taos, poignantly demonstrate that these communities continue to find meaning in the Incarnation, even if their history with Christendom is more of a reflection of the Crucifixion.

Segura-Rico sees ongoing signs of the power of redemption in the collection, particularly one crèche by Annie Merrill that features a Native American, a cowboy, a Mexican with an offering of chilies, a miner bearing gold, and a shepherd.

"Merrill’s set remains a fitting symbol of the Americas, that is, of inclusion and fusion across frontiers," Segura-Rico says.

The crèches, she believes, speak to the principles of social justice in the way they teach us "about the beauty, creativity and dignity of all human lives."

At its heart, the crèche celebrates the Incarnation, that radical idea that God would so long to be in relationship with us that God would immerse Godself in all of creation. The manger scene is ultimately a scene of vulnerability: The Holy Family has been turned away from shelter and forced to give birth in a stable exposed to the elements, and later will flee certain death at the hands of Herod. It offers a powerful reminder that God is present in a special way within our world’s most broken, estranged and forsaken people and places.

But the crèche also celebrates the Epiphany, the idea that God is fully revealed in the person of Jesus. In the 20th century, the word epiphany found a new understanding in the thought of Emmanuel Levinas, a French philosopher who has had an enduring impact on theology and ethics. Levinas believed that we experience an epiphany whenever we look into another person’s face. Our face-to-face encounters, he said, make us realize that we have a deep moral obligation to one another.

Today’s holy migrant families, of course, are being forced to live in barbed-wire refugee camps, drowning in the sea while fleeing violence, and collapsing from dehydration in the deserts of the Americas.

The crèche reminds us that their faces, too, are reflections of the face God. And their bodies are bodies of Christ, broken by endless violence, warmongering and social injustice. The crèche calls us to look into their faces and recognize that we are all migrants searching for safety and a sense of home; it implores us to honor and care for one another on that journey. We are all God’s beloved, and there are no borders, therefore, that can truly separate us in our shared humanity.

Rarely in our recent history has such an epiphany seemed so needed.

“Nativity Scenes from the Americas” will be on display at the College of New Rochelle until Jan. 10.