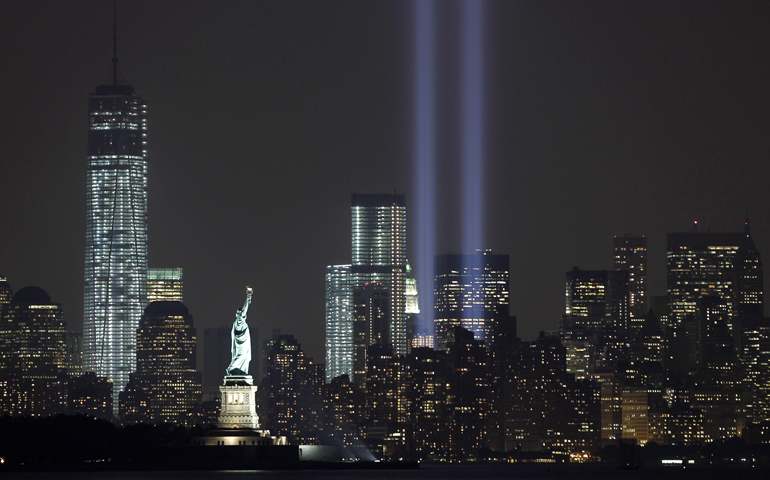 Like most New Yorkers, I typically approach the Sept. 11 anniversary with a healthy amount of dread. The catastrophic images of that day, played repeatedly on local and network news stations, retraumatize our scarred memories. Somber memorial ceremonies take place in neighborhoods around the tri-state area and are streamed live on television and the Internet.

But there is one anniversary event I almost eagerly anticipate. Each 9/11 evening, two bright beams of light rise out of lower Manhattan in a display known as the Tribute in Light.

The tribute first appeared in the city on the six-month anniversary of the tragedy. The two shafts of light offer a presence in the skyline that, even a dozen years later and with a new building nearly complete, still bears the burden of the emptiness left after the towers' shocking, violent vanishing.

The beams are also a tribute to the power of light, a perennial symbol that has been a source of comfort and hope throughout human history.

Since its debut in March 2002, the tribute has been illuminated annually, appearing at sunset on 9/11 and gradually fading with the dawn on 9/12. It is silent and simple, a beacon that allows itself to be whatever its viewers need it to be.

From even the slightest distance, the origin of its light is mysterious. If you do find the source, however, it does not dim the tribute's moving effect. Last year, after picking up my partner from the ferry terminal, we inadvertently drove our car next to the projection site. We discovered that the shafts of light emerge from the roof the Battery Park parking garage, about six blocks from the footprints of the World Trade Center.

We pulled over and let our eyes follow the beams into the heavens. The rays seemed to rise into infinity. But we also got the sense, as one does from a distance, that the light could have been descending from heaven, too.

The two beacons are the result of 88 refrigerator-sized, 7,000-watt xenon bulbs. The beams stretch about 4 miles into the sky, just piercing the stratosphere. On a clear night, they can be seen from 60 miles away, including the Connecticut, New Jersey and Long Island suburbs where so many victims lived.

It takes 10 days for a crew of 30 electricians, stagehands and production assistants, all wearing special eye protectors and gloves, to set up and aim the lights. Each bulb must be focused and leveled by hand because the slightest variation could ruin the effect.

The idea for the tribute was conceived just days after the attacks by artists Julian LaVerdiere and Paul Myoda. Not long before 9/11, the men had been working on the 91st floor of the World Trade Center's north tower on a proposed light sculpture for the building's giant radio antenna. Richard Nash Gould, a New York architect whose SoHo offices faced the towers, presented the concept to the Municipal Art Society, which continues to sponsor the Tribute in Light.

From the beginning, the tribute has maintained its serene constancy. It never became enmeshed in the years of mismanagement of the 9/11 memorial or the competitions and controversies surrounding the construction of a new building at One World Trade Center.

More than 11 years after its premiere, it has remained the same, with only a few tweaks to make it more environmentally friendly.

Since 2007, the lights have been powered by clean-burning biodiesel, a fuel made from the used cooking oil of some of New York City's 4,200 restaurants. One wonders how many meals were prepared, how many people fed, by the oil that lights these lamps.

The tribute also takes place during the peak migration season for tens of thousands of birds, a fact my partner and I realized last year while staring up into the beams. What appeared to us from the ground as flurries of snow was actually the rush of birds on their course to warmer climates.

Ornithologists found that the tribute lights lured in some flocks, causing them to circle inside the beams in confusion. Experts worried the circling could burn up energy the birds need to make their full migration.

The Municipal Arts Society now works together with the Audubon Society each Sept. 11 night to ensure the birds' safe passage. If flocks do get stuck, the tribute lights are turned off for 20 minutes so the birds can reorient themselves. Happily, there have been no avian incidents in the last two years.

Like the birds, New Yorkers have been drawn in by these two rays of light. Each year, there seems to be a dire warning that it will the tribute's last display. The project reportedly costs hundreds of thousands of dollars.

But every Sept. 11, the two beams manage to appear in that patch above the skyline left dark more than a decade ago. In this loud, diverse, enormous city, there is a quiet agreement about the importance of this beacon. They are our searchlights, aiding us in the long struggle find some meaning in that tragic day, and lighting a path toward the possibility of hope and rebirth.