Aim of poster to show border crossers 'are real people,' not 'illegals' 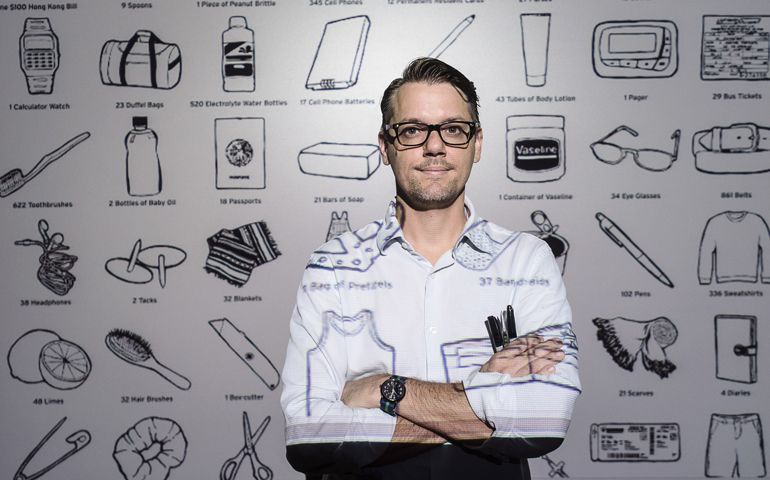 Graphic designer John Stobbe of Tucson, Ariz., stands in front of a poster Aug. 13 he designed for the Colibri Center for Human Rights using images of possessions found on the bodies of border crossers who have died in the Arizona desert. (CNS/Gary O'Brien)

Washington — A human rights center in Tucson, Ariz., has released a poster with the hope that it will bring a human face to those who cross the border between the United States and Mexico.

The poster, titled "The Things They Carried: A Memorial to Lives Lost on the Border" and sold by the Colibri Center for Human Rights, features more than 100 of the most common -- and some not-so-common -- items found on or near the bodies of men, women and children who died when they attempted a border crossing near Arizona from 2000 to 2009.

The poster features some "special" or unusual items found on the dead bodies of the migrants, said John Stobbe, who drew the poster. They include a dead hummingbird, a Barney the dinosaur stuffed toy, 28 sets of dentures, and many religious items that some Catholics tend to carry.

Stobbe, a graphic artist, worked on the poster with his wife, Robin Reineke, who co-founded Colibri. Reineke keeps a spreadsheet of the items, based on photos of objects recovered by the Pima County Office of the Medical Examiner. In some cases, they'll be the only clues to help families identify the remains of loved ones who made the trek north and were never heard from again.

"We're constantly on the phone with the families" trying to find the bodies of missing family members, Reineke told Catholic News Service in a phone interview. "We get as much detail as possible to help us distinguish remains."

When families call the center asking for help, staff members ask when they last spoke to the family member, what the person was carrying and if the person was wearing an unusual item.

That's when objects, such as the ones on the poster, come in handy. Not many will be carrying a Barney stuffed animal when they cross the border so perhaps it belonged to a child, or perhaps the missing person was last seen wearing an unusual belt buckle now documented by the medical examiner's office.

"There's a lot of religious items," Reineke said. "That speaks to the Catholic and highly religious nature of migrant population."

Among some of the objects the medical examiner's office recovered are 51 crosses, 73 "religious necklaces," 10 Bibles, 206 prayer cards, 43 rosaries, 54 scapulars and four images of Jesus.

"They're carrying a lot of protection in the form of Bibles, some of them heavy, amulets, prayer cards -- quite a few," Reineke said.

Popular saints depicted on the medals or figurines include Mary under her various titles, such as Our Lady of Juquila (from Mexico), or the Holy Child of Atocha, an image of the child Jesus.

And then there's the mundane: Some carried Scrunchies, used to keep the hair tied; a photograph of a dog; foot powder; playing cards.

"There are items that any of us will travel with," Reineke said.

Stobbe, the artist, said he usually uses a computer to work on projects, but the intimate nature of the items that belonged to those who had died probably under distress called for something different.

"I made a choice to hand-draw them," he said. "It crossed my mind to do a modern graphic. I did, but I realized it doesn't convey the human aspect of what we're talking about. I realized hand-drawings were really working to give respect to the human part of this."

About 400 posters have been printed so far and sold through the Colibri Center's website. Each costs $20, including shipping and handling, and proceeds will to go help the center's mission of helping identify the human remains of migrants.

"I hope anyone who sees it, regardless, whatever their stance on immigration is ... that it will help these people take a minute and acknowledge that [those crossing the border] are real people and not just something they call illegal," Stobbe said.

Politics | Aim of poster to show border crossers 'are real people,' not 'illegals'

Portland Archdiocese to stay in conversation with school on job offers